The freshman who tried out for the Yale baseball team in the Spring of 1947 wasn’t your typical college kid. The 22 year-old just left the U.S. Navy where he spent the last 3 years on an aircraft carrier flying torpedo bombers against the Japanese. On one of his 58 combat missions, his Avenger was hit by flak, and ignoring his burning engine, completed his bombing run before bailing out. His two other crew members killed, he floated on a raft alone for hours before a dramatic rescue by an American submarine. He earned a Distinguished Flying Cross and three Air Medals, and upon his discharge, he married his long-time girlfriend Barbara and entered Yale University.

When baseball season began, George Herbert Walker Bush was the Yale Bulldogs’ varsity first baseman. From the start he caused quite a stir because he fielded left-handed – an extreme rarity in the baseball world. By all accounts George was a flashy fielder. Yale’s coach, Ethan Allen, whose major league career in the 20’s and 30’s enabled him to observe up close greats like Lou Gehrig and Bill Terry, said Bush was one of the best he’d ever seen, and was quoted as calling the future president “…a one-handed artist at first base.” Teammate Dick Tettlebach, who went on to play with the Yankees and Senators, called Bush’s play at first base: “Absolutely superb. A real fancy Dan.”

His offensive skills were another matter. In the 1947 season he is credited with a .239 average with a homer and a couple of doubles. Since first base is traditionally a spot where you put your big, slow-fielding slugger, the fact that Coach Allen left the mediocre-hitting Bush there as a starter speaks much to his defensive skills.

Yale’s record of 19-8 earned them the honor of playing in the very first college World Series. Held in Kalamazoo, Michigan, the Ivy League Yale Bulldogs faced the University of California at Berkley Bears. The Californian’s won the best of three series sparked by their ace pitcher, Jackie Jensen, later a star outfielder for the Boston Red Sox.

It was a disappointing end to Yale’s season, but like millions of baseball fans have muttered over the years, there’s always next year, and the Bulldogs didn’t disappoint.

In 1948, first baseman George Bush improved his hitting by over 20 points and his fielding continued to sparkle. During one game against North Carolina State Bush went 3 for 5 with a double and triple, accompanied by his usual first-rate defensive play. Walking off the field after the game, a major league scout approached and inquired about George’s interest in playing professional ball. This brush with the scout was as close to the big leagues as George would get as a player, but his 1948 season would be memorable in other ways.

The greatest baseball player of all-time, Babe Ruth, made the trek to Yale in the spring of that year to donate a signed copy of his autobiography to the University’s library. As the baseball team’s captain, George Bush had the honor of accepting the gift from the baseball legend. Years later Bush recalled his meeting with The Babe who was ravaged by the cancer that would shortly claim his life: “…he was dying. He was hoarse and could hardly talk. He kind of croaked when they set up the mike by the pitchers mound. It was tragic. He was hollow. His whole great shape was gaunt and hollowed out.”

After another loss to Berkley in the 1948 College World Series, George Bush graduated from Yale. Though he went on to other things, baseball always remained close to his heart. Each spring he tried to make it to an opening day game, each year alternating between leagues. When he took office as President of the United States in 1989, in the top drawer of his desk in the Oval Office was a well-oiled first baseman’s mitt, just in case.

In my book The League of Outsider Baseball, I have a chapter called “The People’s Game” which features people who are famous in other careers but have a unique tie to baseball. Mixed in with crooner Frank Sinatra, dictator Fidel Castro, author Stephen Crane and bebop genius Dizzy Gillespie was George H.W. Bush. After the book was published, I sent a copy to the former President, not expecting anything in return except maybe for a form letter. Bush had taken a serious fall and had been in the hospital for some time, but, much to my surprise, one day I open my mail box and found this: 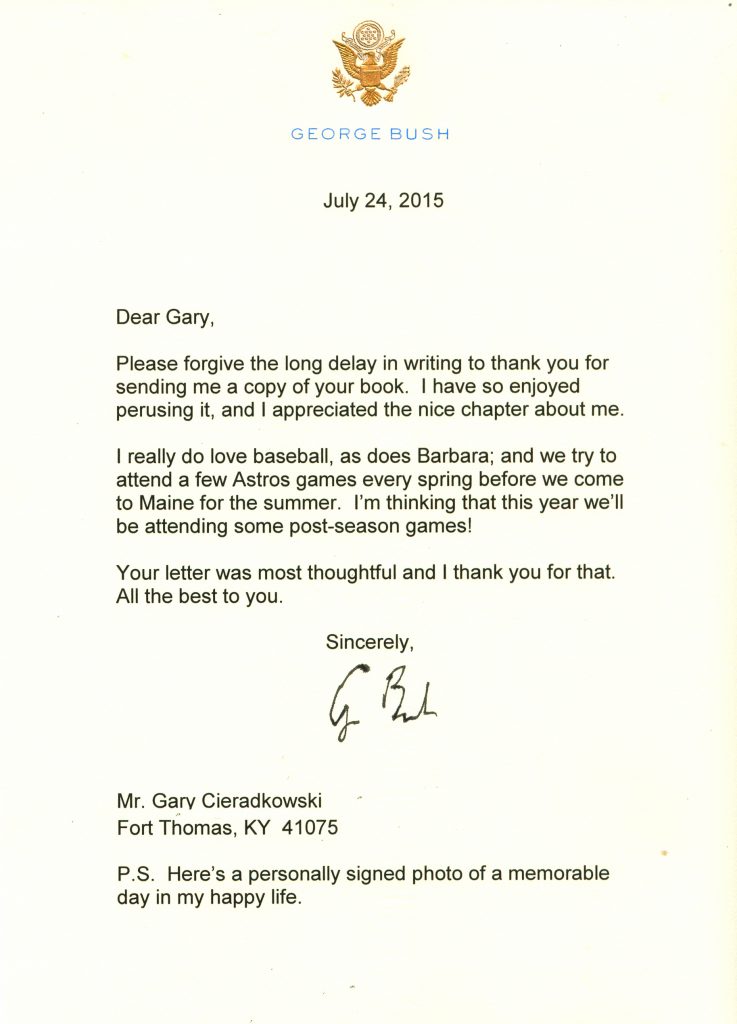 and also enclosed was this: 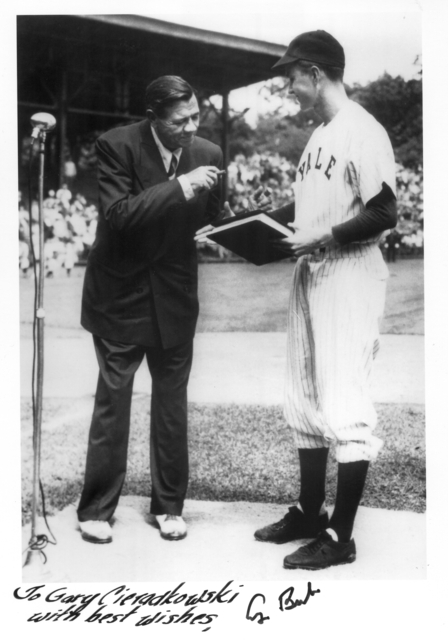 You know, the guy had just suffered a serious injury, yet he took the time to find the photo taken of him and Babe Ruth on “a memorable day in my happy life.”

Today I’m remembering a guy who kept a first baseman’s glove in his desk drawer “just in case.”