Big League ballplayers always say they don’t hear the heckling from the stands – but how about from the opposite dugout?

MOST BALLPLAYERS can put up with a little heckling from opposing players – it’s a part of the game that dates from its very beginnings – but when it comes from a non-player like a trainer or coach, it crosses a very dangerous line. The Chicago Cubs found this out in the 1932 World Series. The Cubs players mercilessly taunted the aging Babe Ruth, and he took it in stride, that is, until the team’s trainer, Andy Lotshaw, started in on him. That a non-player like Lotshaw had the balls to spew invectives at him infuriated The Babe, who roared back at the Cubs bench. To hammer home his point, he hit his famous “called shot” home run that effectively shut up the Cubs, both the players and the lowly trainer.

In 1945, the Chicago White Sox hired a local Southsider and discharged Marine named Karl Scheel to pitch batting practice. Scheel had been a local sandlot star before the war and was the ace of the Third Marine Division baseball team before he was discharged for a back injury. After an unsuccessful stint in the minors, the Sox picked him up to throw batting practice. Besides serving up juicy pitches to the White Sox batters, Scheel had a second skill that manager Jimmy Dykes coveted – a freakishly loud and extremely annoying voice.

The 1945 edition of the Chicago White Sox was a terrible club. In a war-ravaged league where even the lowly St. Louis Browns managed to win a pennant, the Sox still languished in the American League cellar. With a lack of quality players to make the difference on the field, Jimmy Dykes looked to other means to gain an edge, and Karl Scheel’s booming voice was just that. According to Dykes, he set a strict policy of no profanity. As a baseball lifer, he knew that a non-player heckling real ballplayers was already crossing an unwritten line – profanity would be going too far. Besides, Scheel’s naturally amplified voice was good enough.

Players who were victims of Scheel described his voice as piercing and the equivalent to fingernails screeching across a chalkboard. One umpire claimed that Scheel could “whisper and you can hear him down on third base.” Dubbed the “Voice of the White Sox” by the press, Scheel managed to piss off every team in the American League. One team, however, seemed to be bothered by the annoying heckler more than any other.

The St. Louis Browns had won the pennant the previous season, but now the defending champs were in the throes of a season-long losing skid. Scheel had gotten on them during their previous series in St. Louis and he did the same now in Comiskey Park. June 20th was the final game of the series. Scheel had been all over Browns pitcher Sig Jakucki the previous game when he gave up the winning run in the Browns 5-4 loss. Jakucki was an alcoholic sociopath with a seriously dangerous violent streak and he sat in the dugout seething with revenge.

When Scheel came out to pitch batting practice, the Brownies really gave it back to him in spades. The taunting only spurred him on more and, once the game started, Scheel relentlessly worked over the Browns. At one point, St. Louis’ star shortstop Vern Stephens fired a ball into the Sox dugout after Scheel called him “meathead.” Despite the constant irritation, the Brownies managed to hold a 1-0 lead going into the 8th. Then the Chicago bats came alive.

First they knocked starter Al Hollingsworth out and then blasted reliever George Caster. By the time Browns manager Luke Sewell came out to the mound, the Sox were ahead 4-1. Then Scheel bellowed from the dugout “So long George! Too bad you had to come in just in time to lose one!”. That was the last straw. Caster fired the ball into the dugout, which brought out Sox manager Jimmy Dykes. Browns catcher Frank Mancuso told Dykes to put a silencer on Scheel to which the manager replied, “There he is – if you want to shut him up.”

The Browns, led by thuggish pitcher Sig Jakucki, charged across the diamond toward the Sox dugout. Two umpires jumped on Jakucki‘s back, but he easily threw them off. Myron Hayworth reached the dugout first, but Scheel knocked him aside with a Marine Corps judo chop. Jakucki’s left hook was luckily deflected by Scheel’s teammate Tony Cuccinello, but then the other Browns dove in and pummeled Scheel. The umpires were helpless to stop the brawl, and fans jumped onto the field to get in on the action. Finally, Chicago police separated the players and Scheel was carried into the clubhouse.

Luckily for the “Voice of the White Sox,” his injuries were painful but non-life threatening cuts and bruises. The leather and wool warm-up jacket he was wearing muffled many of the blows. Sox manager Dykes actually had the worst of it with nasty spike wounds on his arms and legs.

Luckily for both teams, it was the last game of the series. Jimmy Dykes immediately fired off a cable to league president William Harridge to protest the assault. League retribution was swift – Sewell was fined $250 for failure to control his team, and Jakucki, Clary and Caster were all fined $100 each. Somehow Hollingsworth and the other Browns involved evaded punishment. Sewell protested the charges claiming he had affidavits stating that Scheel had shouted foul profanity from the bench. Sewell also protested that Scheel was not even officially on the Sox roster, a technicality that could have precluded him from sitting on the bench in the first place.

While the assault was indeed brutal, many ballplayers who were on the receiving end of Scheel’s taunts anonymously told the press he deserved it. Besides the sheer annoying tone of his voice, most thought a lowly batting practice pitcher had no right to heckle real ballplayers. Jimmy Dykes disagreed and then doubled down by signing Scheel to a coach’s contract so he could sit on the bench with no problems from the umps. When St. Louis returned to Comiskey, Dykes refused to let the Brownies take a shortcut through the Sox dugout and onto the field, instead making them take the longer route through the dank bowels of the old stadium. Still, Karl Scheel’s big league career lasted only until the end of the summer.

Since his baseball dreams didn’t pan out, the veteran had made a home for himself and his wife Harriet on the Southside, where both were raised. The two had a daughter, Madelynn, in 1949 and Scheel carved out a distinguished career with the Chicago Fire Department. In 1955, he raced into a burning hotel and rescued five trapped guests, a heroic feat which earned him the coveted Harrison Award for Bravery. In his spare time, Scheel was a pillar of his community, active in the church and Boy Scouts as well as bowling and hunting, all presumably non- heckling activities.

This story was originally published in 21: The Illustrated Journal of Outsider Baseball. 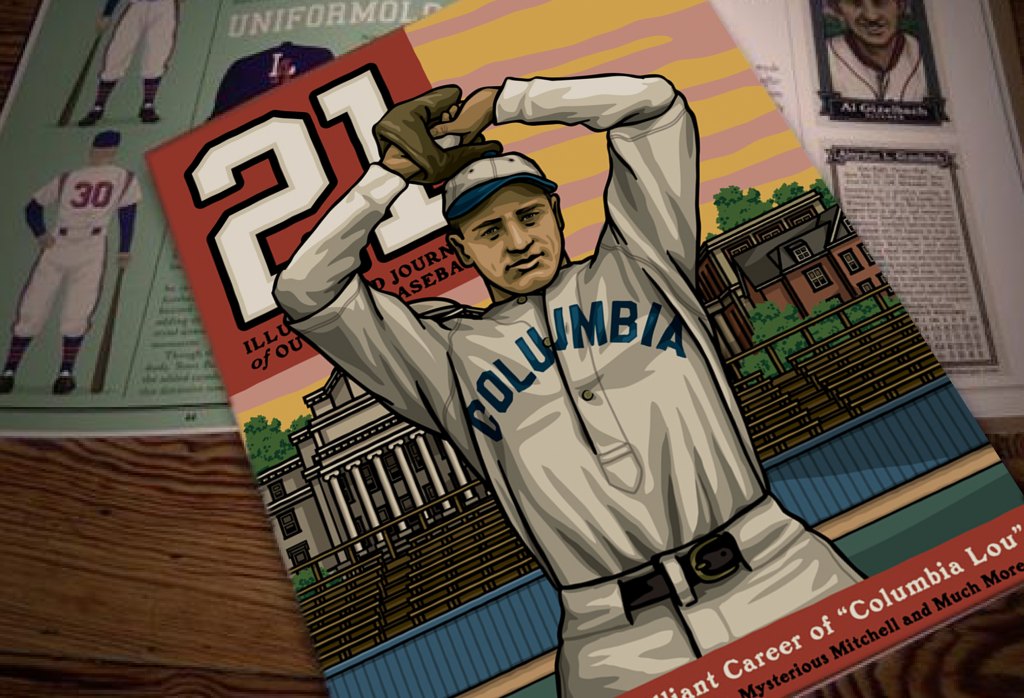 From Gary Cieradkowski, author of The League of Outsider Baseball: An Illustrated History of Baseball’s Forgotten Heroes, comes an artistic journal of baseball history and art. While some of the characters in this first volume will be familiar to most baseball fans, this journal focuses on their little-known aspects, such as Lou Gehrig’s college career. Other players will be more obscure: it’s a pretty sure bet that no baseball historian has ever written about Al Gizelbach or Karl Scheel. Some, like Johnny Wright, have been mentioned in books or articles, but their whole story never told in full – until now. Each article is beautifully accompanied by Cieradkowski’s bold, colorful illustrations, and the stories are told in an engaging, fast-paced style. Special features of the journal include a step-by-step look at how the artist creates the illustrations and a detailed look at a featured historic uniform. This is 68 pages of pure baseball joy, lavishly illustrated and told in the true tradition of diamond lore.

Copies of 21 are available HERE