Don’t worry – I’m not going to pontificate on my life or give you my take on the virus lockdown and lack of baseball.

This post is going to be the first one of several updates on what I’ve been up to lately – which in hindsight, actually looks like a lot. On the normal side of things, I’ve done a ton of new card illustrations. There are some of my usual obscure guys along with some pretty well-known names. Now I have to write the stories that go along with them.

I’ve been doing my usual Booklet Series (if you haven’t checked them out, you can do so HERE). We’re up to Number 22 now, and I’m trying to wrap up number 23 this week and get them in the mail to my subscribers. That will be a separate update because it dovetails neatly with a book cover job I just completed. In addition to the book cover that I’m referring to, I am also going to begin work on another book cover for a great new turn-of-the-century baseball history book. I haven’t done book covers in a while, so these have been a treat to work on.

And speaking of books, I’ve been contracted to create a small illustrated history of a unique 1890’s semi-pro baseball team. This is a neat little-known story and I’m working with a couple of really great historians to bring this story to life.

And on top of all that, I am halfway through creating a whole new 20-card set depicting one of my favorite historical ball teams. Once I get past these posts about what’s been going on, I’ll start posting the set, one player at a time and let you know when the actual card set will be available.

OK, so let’s get started on the first update.

When I work in my studio, chances are I’m listening to a book on tape or a podcast. I like history and true crime, and subscribe to dozens of them. For years I’ve tried to find a baseball podcast, but so far have not found one that I care for.

That may have changed.

A few weeks ago, Dan Wallach, Executive Director of the Shoeless Joe Jackson Museum and Baseball Library in Greenville, South Carolina contacted me about doing the logo for the museum’s new podcast called “My Baseball History.” For those of you who are unfamiliar with the museum, it is, of course, dedicated to the life of Shoeless Joe. What’s more, it is located in the house in Greenville that Jackson lived in and has just recently undergone a major renovation and expansion. “My Baseball History” is part of this new beginning at the museum.

As you can hear for yourself in Dan’s introductory broadcast, each long-form episode will be an interview with a guest who has some sort of association with the game, whether it be a former player, historian, executive, journalist or artist. Each guest will be invited to discuss about how they fell in love with baseball, how their career started, and how they got to be where they are today. I think this will be a very interesting podcast and I’m proud to be associated with it.

Now I’ll tell you a little about the design we did for the show. Dan was pretty prepared going into it, with a clear idea of what he envisioned for the logo. Since the show is associated with the Shoeless Joe Jackson Museum and Baseball Library, there had to be some elements of Joe included – but because every episode won’t be about Shoeless Joe, these elements had to be at the same time generic, evoking classic baseball.

I did a sketch based on the reference Dan supplied me and then discussed a few changes and tweaks. From there it was a pretty straight-forward job. Here’s the finished piece: 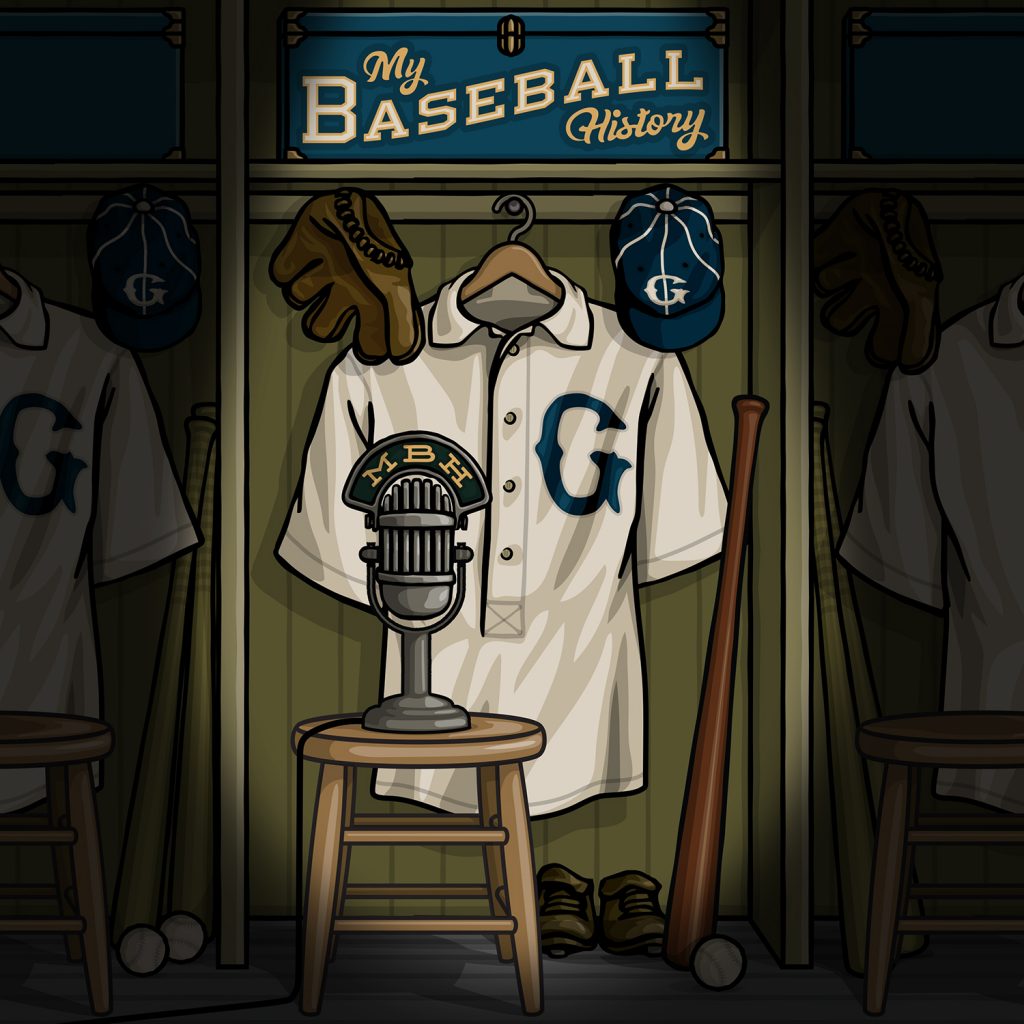 As you can see, at first glance it’s a circa 1910 locker. But, upon close inspection, you may have recognized that the team represented is the Greenville Spinners, Shoeless Joe’s first professional team. And that bat sitting in the locker? You guessed it, one of Joe’s trademark Black Betsy’s, whick, contrary to it’s name, was actually a deep brown.

So that’s my first installment of “What Has Gary C’s Been Doing During The Lockdown.” Tomorrow I’ll give you another look into a recent project.