Back in the winter of 2001 I was working for a design firm in Colorado. It wasn’t a good move on my part and to make a long story short, for the only time in my career, I got canned. There were no other design jobs in the area and I wasn’t too happy living there anyway, so I knew I was going to move – but where I did not know. I flew back to New Jersey for the holidays and set up a series of interviews up and down the eastern seaboard. I received a handful of job offers, but nothing that really excited me. On a stop over in Baltimore I reconnected with a guy I met earlier that year when I was in town visiting an old friend from art school, Amanda. Knowing how much I loved baseball, Babe Ruth and the New York Mets, Amanda invited a friend to meet us for lunch. That friend turned out to be a guy named Charlie Vascellaro. Among other things, Charlie had worked in minor league PR for a time, then became a freelance writer specializing in baseball. So when I had a free evening in Baltimore, Charlie was the man to call.

We met up at a tavern on Charles Street and spent a great evening drinking and talking baseball. Then, out of the blue, Charlie asked me if I would be interested in a job for the summer. This wasn’t any job, this was to take a traveling exhibit from the Babe Ruth Museum across the country starting in April in Arizona Spring Training and continue during the whole minor league season. This would entail living out of a truck, barnstorming from city to city all over the country.

I was torn. I love baseball, and love the Babe. Heck, the first thing I did when I moved to Baltimore for art school back in 1988 was make a beeline right to Ruth’s birthplace on Emory Street in Pigtown. But at that point I was 31, a little old to be chasing a game across the country. Still, accepting a job I wasn’t passionate about didn’t seem right, either. I told Charlie I’d let him know in a couple of days.

The next morning I called my Pop at his work and laid it all out to him, expecting the old man to snap me back to reality.

“Whatta you, some kinda idiot? Take the Babe Ruth job!”

So I did, and spent the next 9 months “Barnstorming with the Babe,” as Charlie was fond of saying. Our trip took us from Mexico to Canada, something like 32 states and 170+ ballgames. We stayed in some the country’s finest hotels, like Louisville’s Seelbach, and some of the skeeviest, such as the Sahara in Holbrook, Arizona ($20 a night). We suffered through multiple engine breakdowns, a mini tornado that half-destroyed our exhibit and too many hangovers to count. But we also saw daylight break over desert landscapes that would make John Ford envious, spent an afternoon with the late, great Mark Harris, author of Bang the Drum Slowly, and watched from the stands in our beloved old Shea Stadium as a rookie we had met in the minors earlier that season got his first big league hit.

But on top of all that, I made a lifelong friend in Charlie. He’s truly one of the more eccentric characters that the game of baseball seems to attract. One thing I’ve learned since we met two decades ago is that Charlie knew anyone who is anyone in the game, from the left field beer vendors at McCoy Stadium to the GM’s of big league teams. And let’s not forget how Charlie had an outfit for every occasion – and I’m not talking about a novelty t-shirt – I’m talking about an OUTFIT. For every occasion. Charlie’s choice in patterns and colors are legend from Mobile to Montreal. Oh, and if you’ve never seen his Harry Carey imitation, then your life just ain’t complete yet.

That’s why when he asked me if I would lend him an illustration to accompany an article he was writing for “Memories and Dreams,” the Hall of Fame’s magazine, I said yes. This issue just came out this past week, and if you turn to page 18 you’ll come to Charlie’s article Diamond Charm: From the Black Sox to the Elite Giants, Baltimore Boasted a Storied and Successful History as Part of the Negro Leagues.

Page 20 has my illustration of Roy Campanella as an Elite Giant, circa 1942. 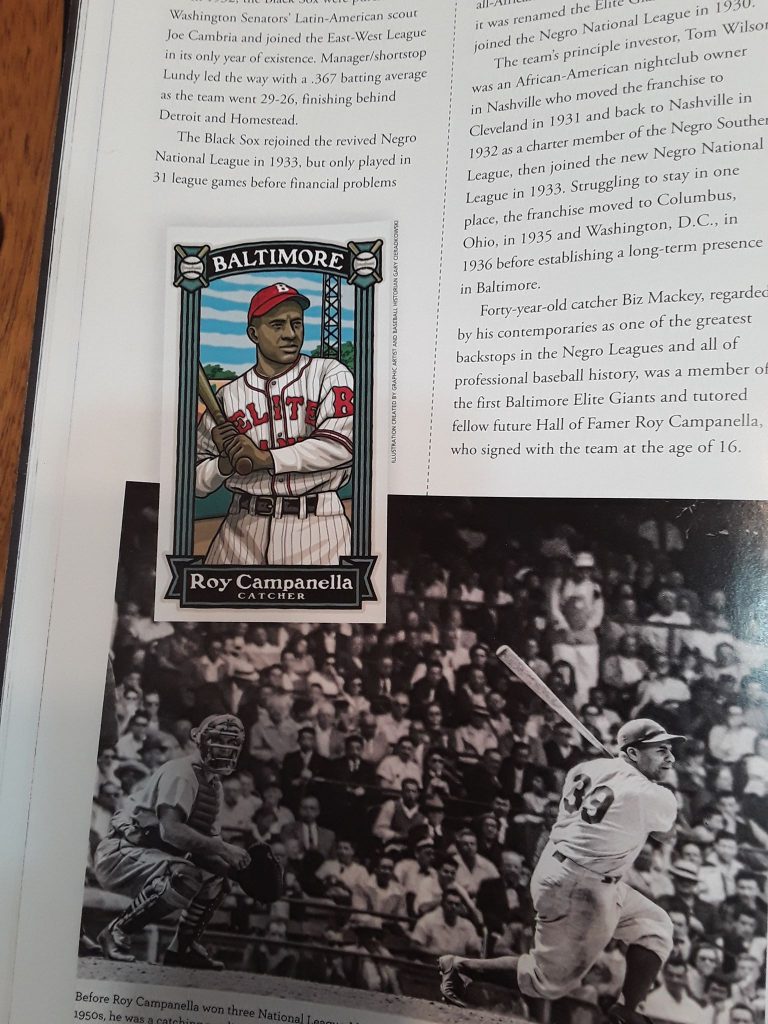 It’s nice to have my work so prominently showcased in the official magazine of the Hall of Fame, but I find it a bigger thrill to have my work accompany an article by my good friend, Charlie Vascellaro, a real baseball lifer.

Note: You can see my full story that originally accompanied the Campanella illustration, Race, opportunity and the 1942 pennant, HERE.

So that’s the third installment of “What Has Gary C’s Been Doing During The Lockdown.” Tomorrow I’ll give you another look into a recent project.