For the past year or two I’ve been working with a company out in California called Teambrown Apparel. Rob, the owner, has a real love for baseball and his company offers several lines of cool baseball-centric t’s, sweatshirts and odds and ends. The first series of shirts I did with Teambrown was one that I had sitting around for years, just waiting for the right opportunity.

As you probably know from my blog, I have long been interested in the history of the Negro Leagues. I’ve written about, illustrated and researched the teams and players since the 1980’s. Since then, awareness of the old Negro Leagues has exploded, from MLB tributes, a museum in Kansas City and a wealth of well-researched books and articles. One thing that always bothered me, though, was the lack of really good looking Negro League t-shirts that embraced the rich history and visual eye appeal of the era. To me, the available apparel were cheaply made and badly designed, and I longed to be able to take a crack at a series of team shirts, putting to work all that I had learned about the Negro Leagues over the decades.

Working with Rob, I dug out a series of six designs I had done years ago that represent the six Negro National League teams, circa 1942. I really poured my heart and soul into these designs, trying to make them look just as if they were ripped right out of the 1940’s. My art paired with Teambrown’s production ability helped make my line of shirts come to life. I was, and continue to believe, that these are the best Negro League shirts out there, and it’s all because I was given the chance to create the shirts that I had always wanted to see for sale in a store. Recently, the Smithsonian in Washington, DC and the National Baseball Hall of Fame in Cooperstown have picked up the line, which is one heck of a compliment. 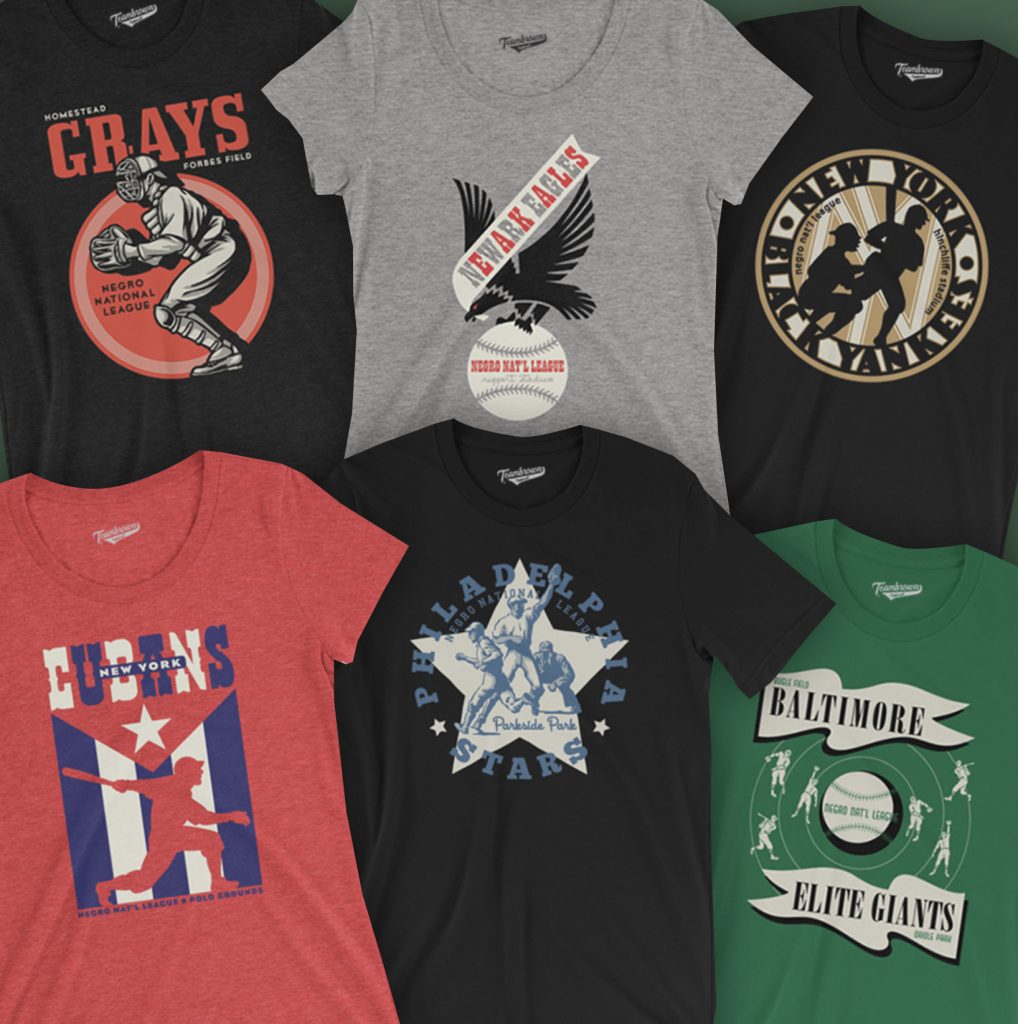 Because I was impressed with the quality of the Negro National League line and the pleasure of working with Rob, I created a second line of apparel, this time paying tribute to the All-American Girls Professional Baseball League. Just like I had with the Negro National League series, I wanted to create designs that looked like they would have been sold at ballpark concession stands in 1945. The original AAGPBL teams had really sub-standard team logos back then, usually just using the seal of the city which they represented, and if you ever saw the town seal of Rockford or South Bend, it’s a real downer. I wanted to change that, and when I saw the finished product, I think I really did.

Each of the six original designs represent one of the AAGPBL teams: Rockford Peaches, South Bend Blue Sox, Grand Rapids Chicks, Kenosha Comets, Kalamazoo Lassies and Chicago Colleens. Like all of the Teambrown apparel that I designed for them, these are all available in not only womens, mens and kids t-shirts, but also the classic baseball “sleeves” style, which is my particular favorite. Fully licensed by the All-American Girls Professional Baseball League Players Association, I think this collection is some of my finest work and hope you do, too. 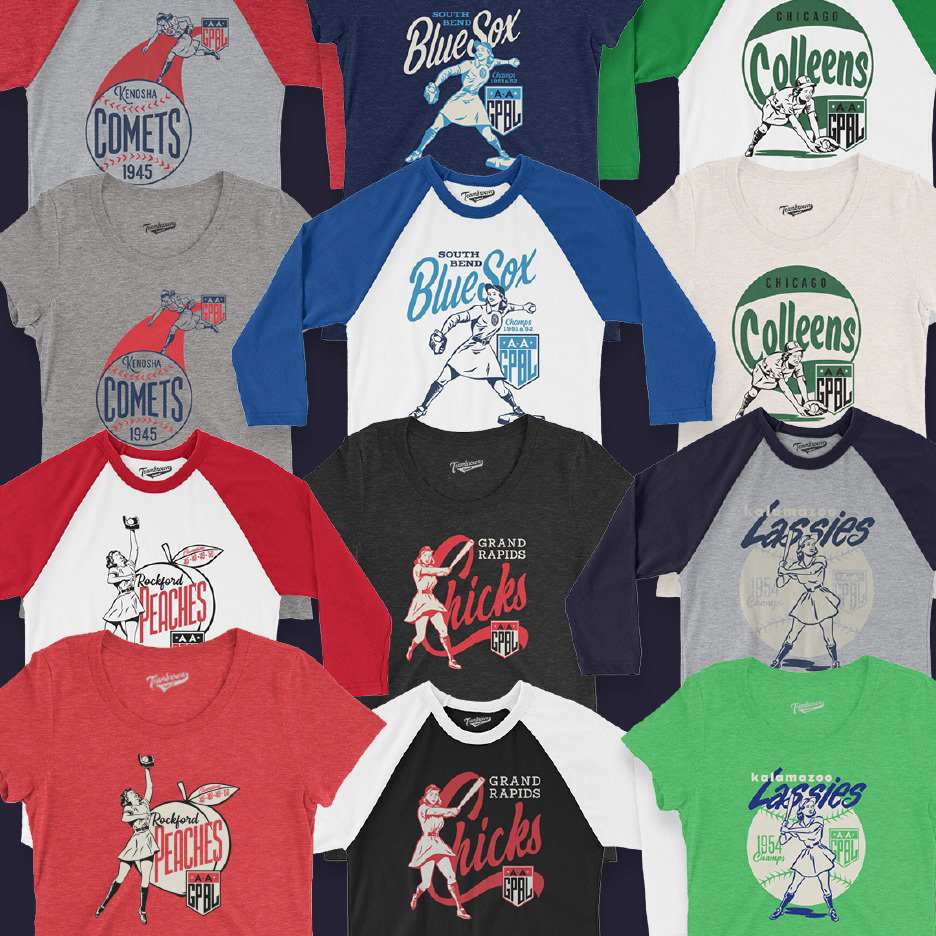 Now my latest series for Teambrown is the City Series. These are a set of baseball-themed shirts representing 8 American cities. The figures were borrowed from my Baseball Alphabet poster art, and harken back to the great illustration style of the 1920’s. Without laying claim to any particular team, you can celebrate baseball in Brooklyn, New York, Chicago, Cleveland, San Francisco, Detroit and Los Angeles. Like my other designs for Teambrown, all 8 cities are available in mens, womens and kids t’s, sleeves and hoodies. 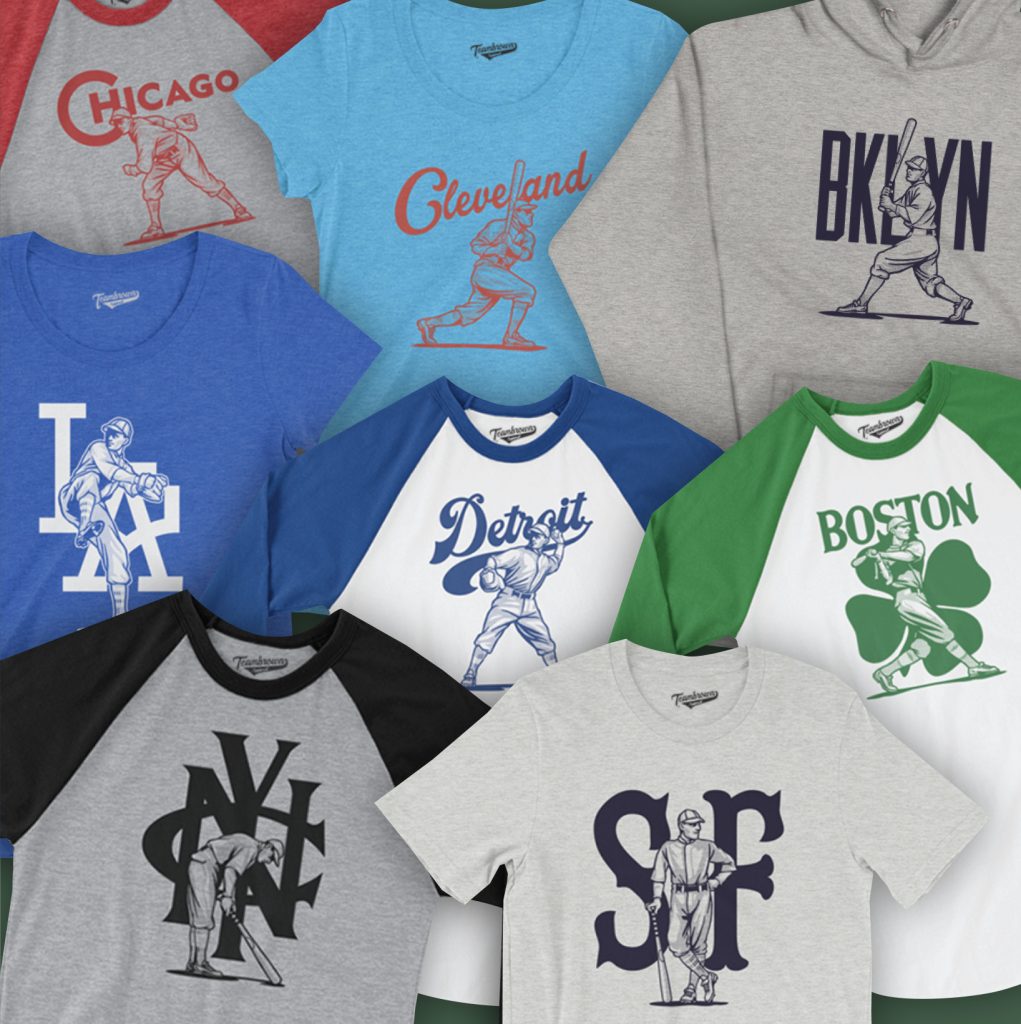 Now with the City Series completed, I think the next set of designs will be additional All-American Girls Professional Baseball League teams, because there are something like 8 more teams that Rob has received inquiries about availability.

Well, that’s today’s installment of “What Has Gary C’s Been Doing During The Lockdown.” Tomorrow I’ll show another recent lockdown project, then I’ll introduce a really cool card series I’ve been slowly working on…