Sports Overnight America radio host Fred Wallin was kind enough to have me as a guest on his syndicated show today. Fred’s a long time friend of The Infinite Baseball Card Set and I had been on his show a couple times in the past, once to talk about my book, The League of Outsider Baseball and again to discuss my 21: The Illustrated Journal of Outsider Baseball. This afternoon we talked about one of my favorite ballplayers, Steve Bilko as well as Roy Campanella. The latter brought us to a discussion about my Booklet Series, which, for those who aren’t familiar with it, is a kind of a long-form extension of my book, only (in my opinion) better.

You can listen to the interview HERE

In this post I’ll go through what The Booklet Series is and where it came from. 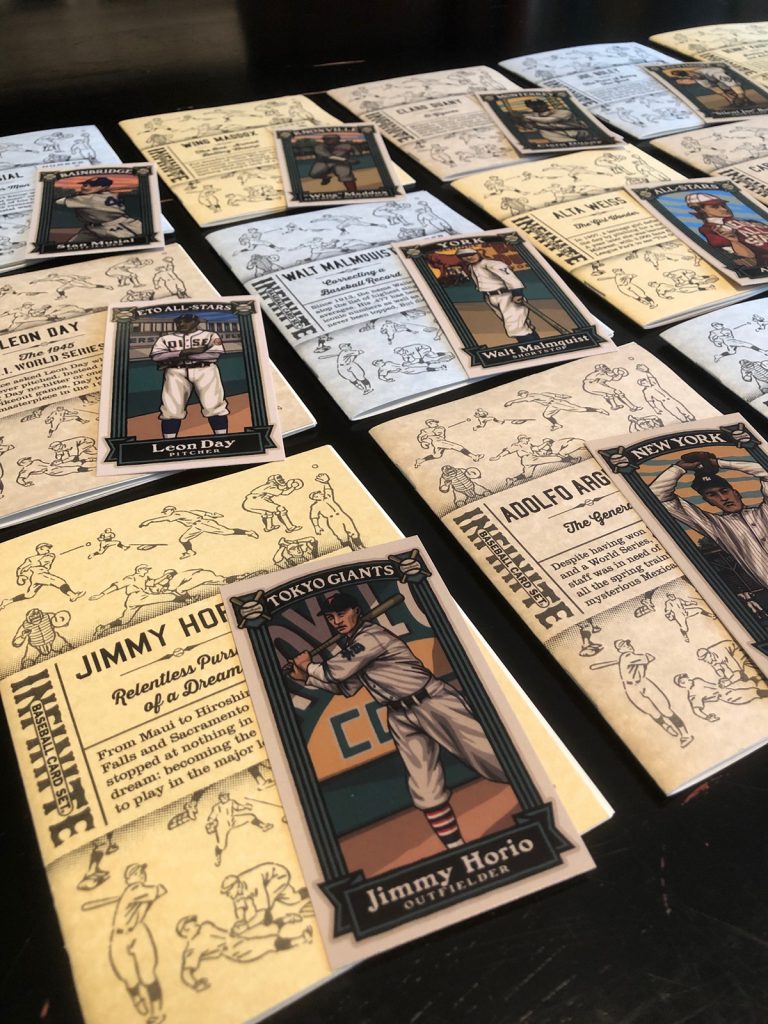 Since I was a kid I always liked little books, especially guide books, schedules and information booklets. Being a baseball fan, I naturally gravitated towards the sports ones, and would scour my grandparent’s attic in search of these little treasures. Every season baseball teams would put out there schedule and roster in small pocket-sized format and leagues would produce their own “who’s who” with a small biography of each player. These little books didn’t take up much room and were easy to keep at arm’s length for quick reference. In the decades before the internet, these guides and booklets were the favored form of easy information reference. 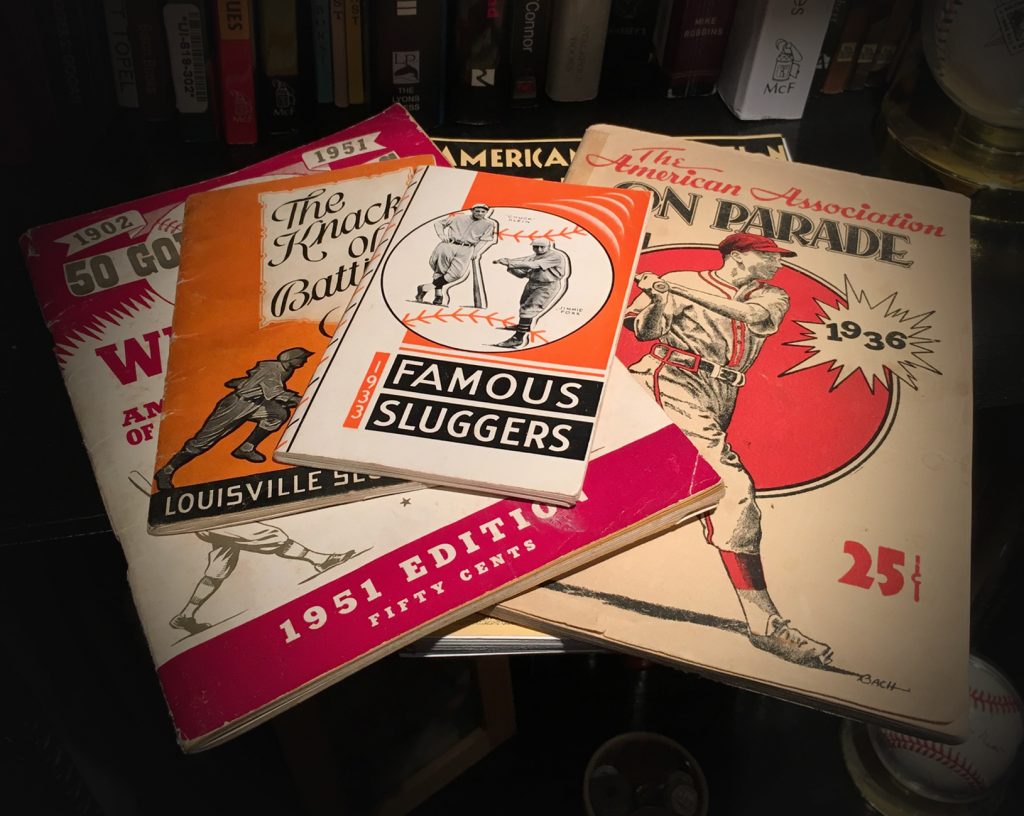 Two years ago, I was looking for a new way to share my baseball stories and drawings. So far I published a book, The League of Outsider Baseball, and sporadically put out a journal, 21: The Illustrated Journal of Outsider Baseball. However, I wanted to come up with a more immediate format with which I could produce my work. The stack of old baseball schedules sitting on my bookshelf provided me with the perfect solution.

I thought, instead of going to a printer or publisher and waiting months for the final product, why not create my own series of small booklets? I figured if I could print and assemble them right in my studio then I would have an immediate and personal outlet for my favorite baseball stories, research and illustrations.

After designing several different styles of prototypes, I hit upon the most practical and cost efficient way to realize my self-publishing ideal. 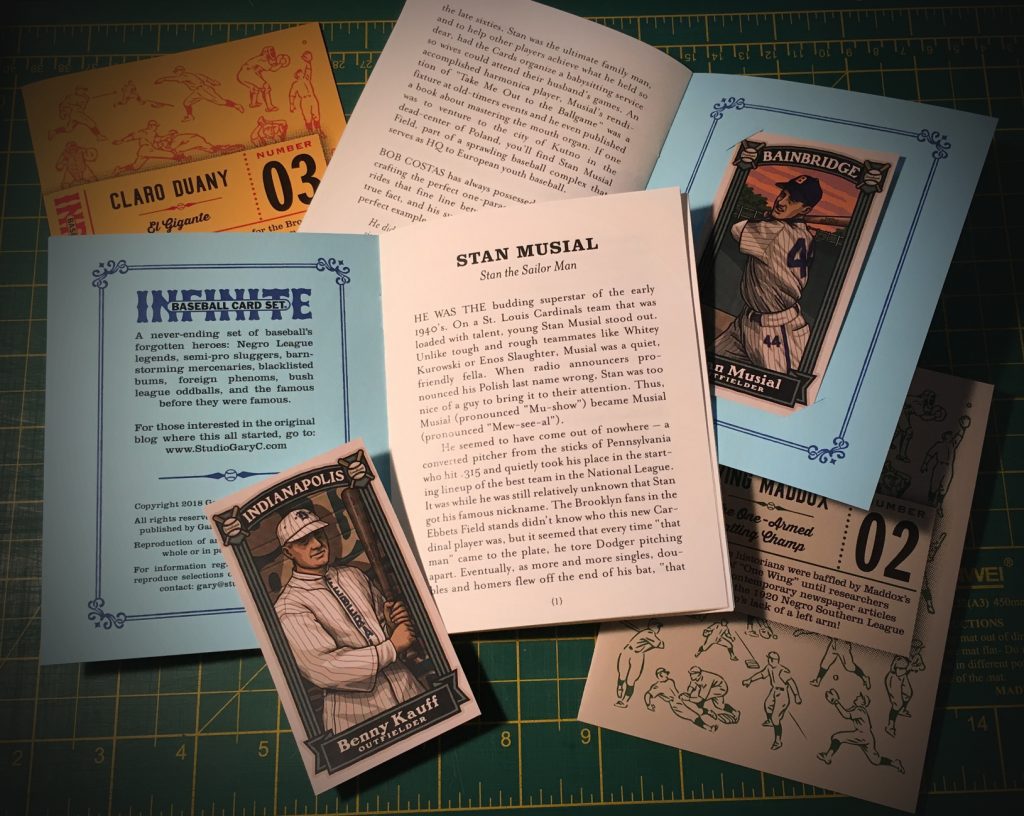 Each of the numbered 4 1/4 x 5 1/2″ booklets feature an 8 to 24 page story along with a colored art card attached to the inside back cover. These mini-books can be bought individually, thematically or collected as a never-ending set. They are mailed out to you in a custom-made envelope and greeting card, a stylish way to make sure they don’t get bent in the mail. 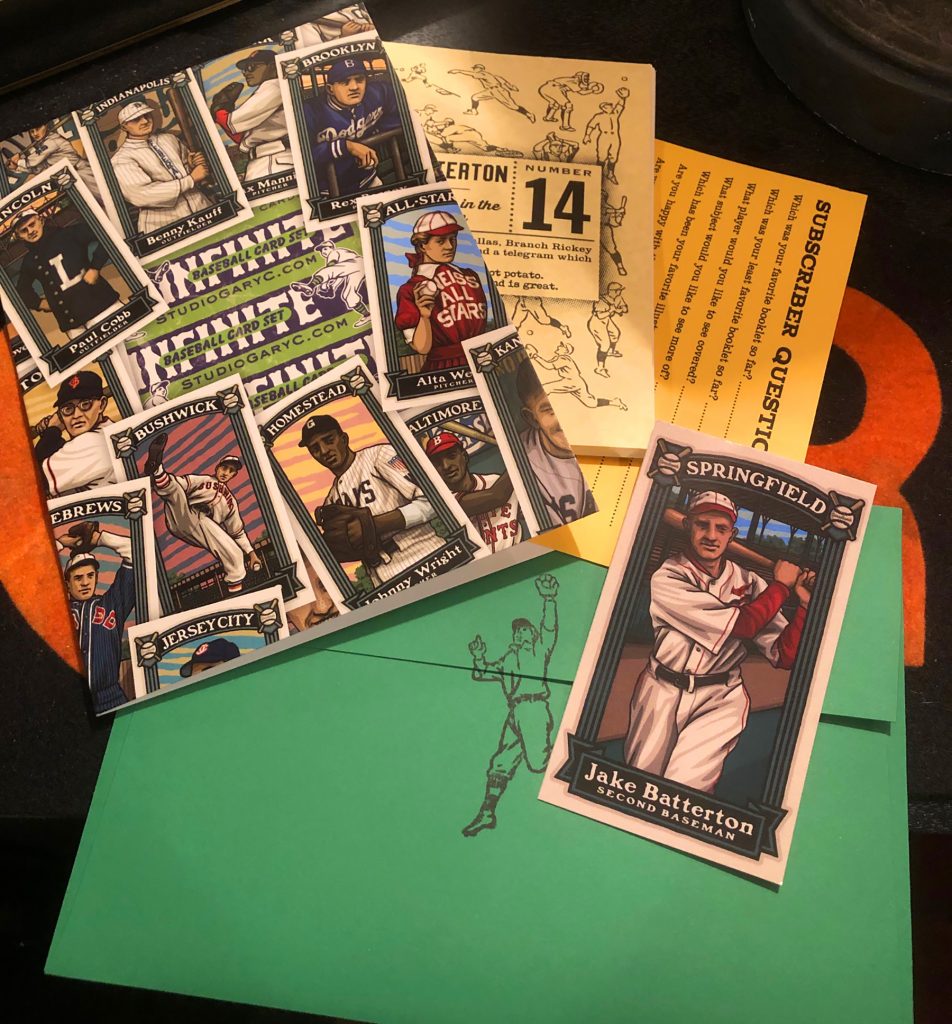 Because these will be handmade in my studio, the production number of each booklet tends to be low, available on first-come-first serve basis. In addition to being available individually, I offer a Season Subscription to the Booklet Series, which includes 12 regular-season booklets a a special price plus 1 or 2 “subscriber only” booklets. To kick off the Booklet Series, I created an introductory set of five which demonstrates the range of eras and players I want the Booklet Series to encompass:

Once I produced these five, I felt more than confident that a full-blown regular Booklet Series was doable. I opened it up for subscribers and I was on my way. The hardest part was deciding what players to cover. However, since I was doing this project on my own and under my own terms, I had leeway like no other publishing endeavor. So, I went full tilt, first doing the story of my old friend Leon Day and his triumph in the 1945 G.I. World Series. This was a story I. was particularly proud of since Leon was a friend of mine back in Baltimore and I had heard the story straight from him. I researched the heck out of this piece, and to this day it is one of my favorites. Apparently others have thought so as I have been approached by no less than three would-be script writers trying to turn the story into a movie. 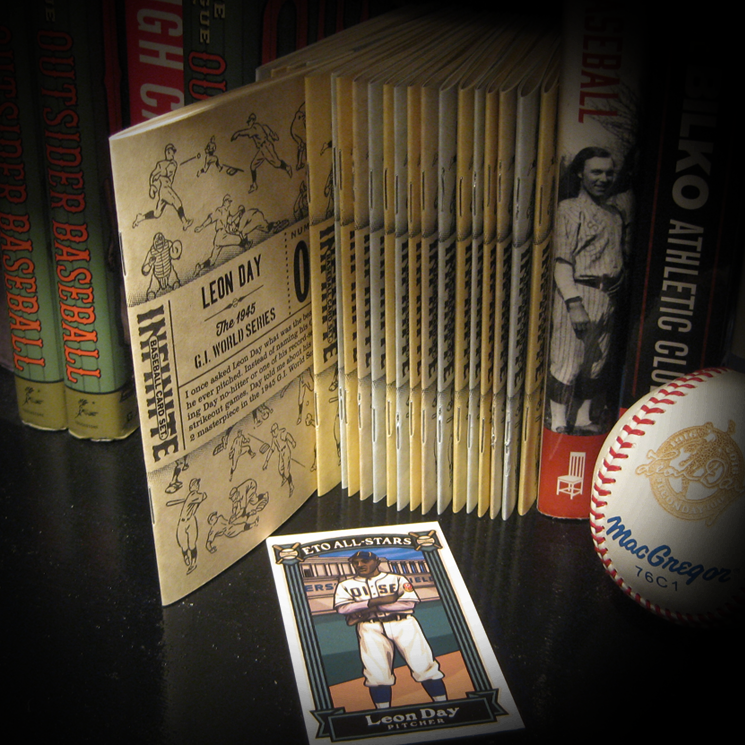 From there I did the story of Walt Malmquist, a guy credited with having the highest single-season batting average in minor league history – problem is, he really didn’t. A couple historians have proved that it was a misprint, but I went full throttle and actually reconstructed the entire season through box scores and calculate what he actually did hit. This was egghead research at its best! 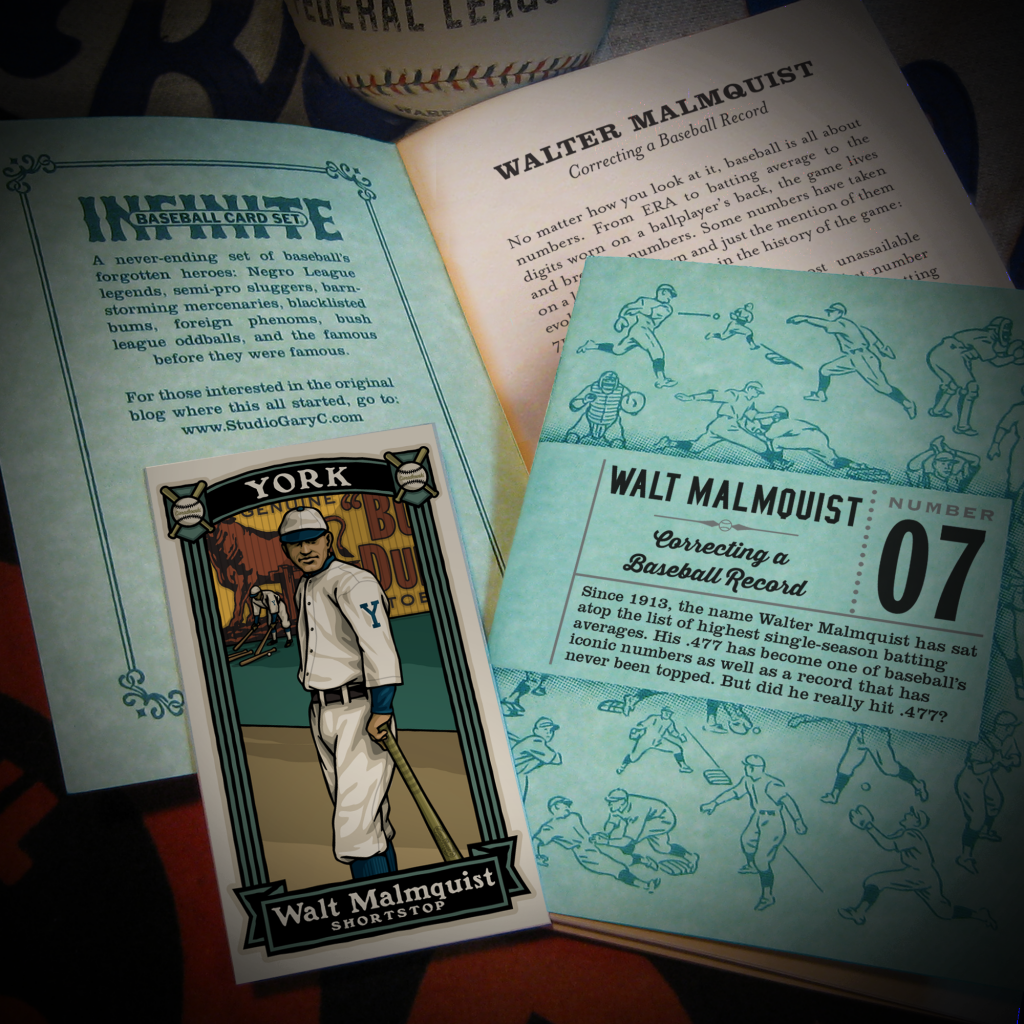 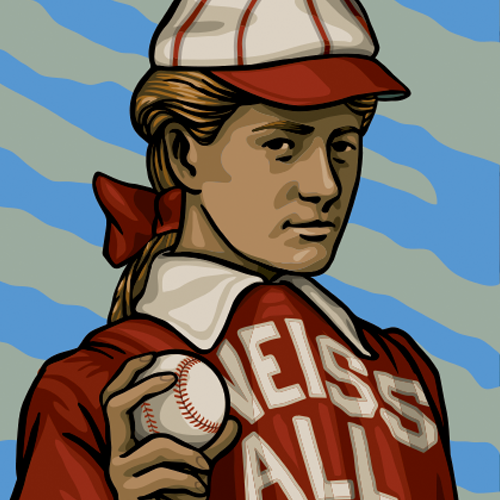 I followed that up with Alta Weiss, the early 1900s “Girl Wonder” who made headlines with her pitching prowess. You see here mentioned in many places, but as far as I know, no one has constructed a full-blown piece on her like I did. Then there was the illustration I did of Alta – I think it came out really nice, and truly captures her spirit.

Realizing that the average baseball fan might get bored with too many players they never heard of, I made sure to cover the more famous names, though highlighting an aspect of their career many may not be familiar with. In Season 1 I did Stan Musial, focusing on his days playing baseball in the Navy during World War II. In Season 2 I have covered marquee names like Shoeless Joe Jackson and Roy Campanella with Eddie Mathews on-deck in the near future.

Anyway, that’s a good rundown of what my Booklet Series is all about. I highly recommend signing up for the subscription, but if you are not willing to make that commitment yet, try ordering a copy of your favorite booklet and see what all the fuss is about. Right now there’s 25 different ones to choose from and you can see them all in the Booklet Series section of my store. 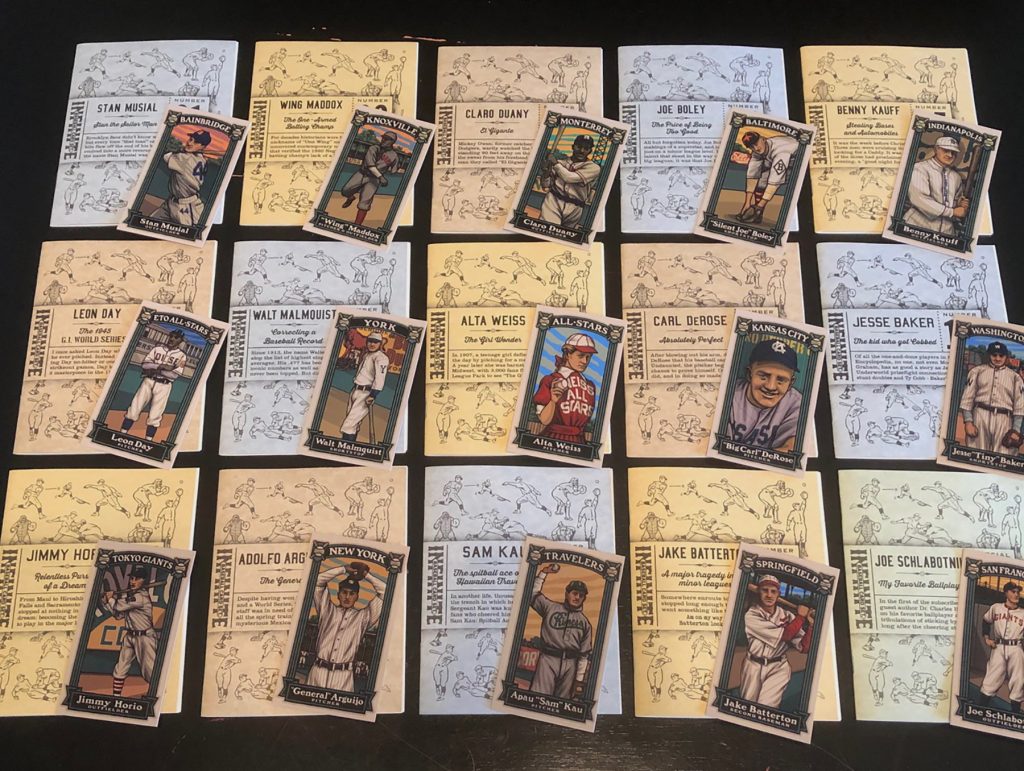 NOTE: You can here my interview HERE.