This week Terry Cannon, friend and proponent of baseball outcasts, fanatics and fiends everywhere, passed away. I’m not going to go into any long dirge about his passing–there’s plenty of other friends of his (and there are many!) who can wax more poetically than I. Instead, I’d like to mark his passing by featuring a ballplayer who completely epitomizes the ideals that drove Terry to found baseball’s most inclusive collection of its outcasts – The Baseball Reliquary and its Shrine of the Eternals.

Five years ago I was awarded what I still call the biggest achievement of my career – the Reliquary’s Tony Salin Award. Given to a writer, researcher or artist, the Salin recognizes “individuals for their commitment to the preservation of baseball history.”

“Commitment to the preservation of baseball history.”

That’s quite a heavy honor to be adjudged worthy of, and not something I will ever take lightly. 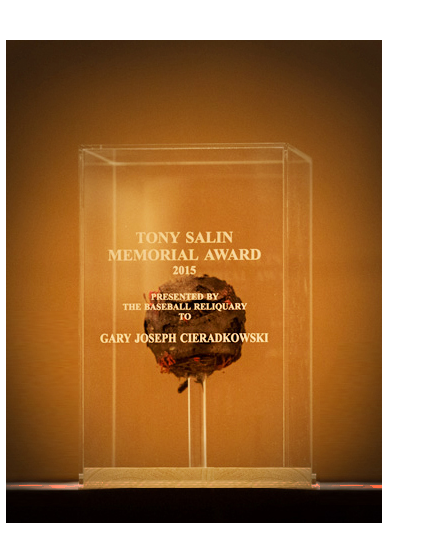 After the ceremony where I accepted my award, I was approached by Terry who informed me that it was customary for each new Salin awardee to sign a glove owned by the son of the man whom the award was named for, writer/researcher Tony Salin. On cue, Tony’s son produced a glove covered with the signatures of not only past Salin awardees, but also the band of baseball misfits who were inducted in the Reliquaries’ Hall of Immortals.  Tony’s son pointed out a special space on a finger where he wanted me to sign – right below Steve Dalkowski.

To compound the headiness I was experiencing from being awarded the Salin, this gesture of adding my signature beside the player who I believe embodies everything Terry established the Reliquary for, was simply exhilarating.

Steve Dalkowski had been the one player that Terry had always suggested I cover on my blog. However, I held off, wanting to save his story and illustration for something bigger. That turned out to be my book, The League of Outsider Baseball. As an odd coincidence, the last story I posted on my blog was that of Frank Zupo, a slam dunk Reliquarianesque subject if there ever was one, and who happened to feature prominently in the story of Steve Dalkowski.

So, to say goodbye to my friend Terry and bring the story of Frank Zupo full circle, I present you with the story of Steve Dalkowski…

He out of the housing projects of New Britain, Connecticut, average height with below average eyesight and a left arm that threw comets. The Orioles heard about his 18 strike out high school no-hitter and signed him, the $4,000 bonus going towards a brand new 1957 Pontiac rag top.

No one knows how fast Dalkowski could throw, but veterans who saw him pitch say he was the fastest of all time. Some put the needle at 110 mph but we’ll never know. He threw so hard that the ball had a unique bend all its own due to the speed it traveled. Physics made the thing dip halfway to the plate then accelerate and rise one to two feet as it blazed across the plate.

Someone likened it to a fighter jet taking off. The only problem was Dalkowski had no idea where the ball was going go once it left his hand – left or to the right – when it did go over the plate more often than not it was three feet over the terrified catcher’s head.

First stop was Kingsport, Tennessee where Dalko (as lazy sportswriters dubbed him) pitched 62 innings and averaged 18 strike outs per game. Yet he only posted one win – turns out he walked even more batters than he fanned. His heater was so fast and uncontrollable that in one game the 18 year-old tore part of a batter’s ear off.

He moved up to the Wilson Tubs where one of his pitches eluded his catcher sailed past the ump and tore through the wooden backstop. Cal Ripken, Sr. was there, he saw it happen.

Later in ‘58 he was sent to Knoxville in the SALLY League where one terrified batter had to leave the game to change his underpants after a Dalko fastball barely missed taking off his head. The Orioles sent him to the South Dakota where he pitched a one-hitter for the Aberdeen Pheasants – but lost 9-8 from the walks he issued.

In 1959 he went to spring training with the Orioles where a whole team of experts tried to harness Dalkowski’s left arm. The Orioles had the phenom pitch the last inning of a pre-season exhibition game against the Reds. Dalko struck out the side with nine pitches. The O’s sent him back to Aberdeen where he recorded 21 strike outs in a game, a Northern League record.

Down in Pensacola in 1960 Dalkowski drilled a guy in the back with his fastball – not anything out of the ordinary except the dude he hit was inside the stadium standing in line for a hot dog. The guy lived to have Dalko sign the ball for him.

1960 spring training came and went with absolutely no progress in Dalko’s aim. The more the coaches tried to give him advice the farther outside the strike zone he threw. He was still just 21. There was plenty of time.

The O’s sent him to Stockton in the California League. He held the Reno Aces to four hits, struck out 19 but lost 8-3 due to nine walks. In one game a pitched ball sailed over the head of the catcher and busted the ump in the face, breaking the mask in three places, knocking him back 18 feet and landing him in the hospital for three days. A radio announcer broadcasting one of Stockton’s games was hit with a Dalkowski fastball – up in the radio booth.

Spring time came and more pitching geniuses failed to tame Dalko’s wildness. His life began to spiral out of control with as much velocity of his fastball. Scotch and soda became his hobby and he racked up drunk and disorderly arrests like strike outs. Still Dalko was a friendly guy, his teammates loved him and tried to look after him as best they could. One even confiscated his paychecks and doled out an allowance to the pitcher so he’d have something left after the season ended.

In 1962 the Orioles sent him to Elmira. In between drunk driving Cadillacs into cop cars, Dalkowski set all the wrong kinds of records: 120 pitches without getting out of the second inning and a 27 strike out game where he walked 16. At least he won that one. But Elmira had something no other Orioles farm team had: where a young manager named Earl Weaver.

At one point in the season Weaver gave all his players IQ tests – Dalkowski bottomed out at 60: “mild mental disability”. In those two digits Weaver saw the answer to Dalko’s wildness – he simply could not comprehend too many ideas at once. Here the Orioles pitching gurus had been trying to teach him curves, change ups, sliders – Dalko had no idea what to make of any of that.

Weaver worked with the flamethrower constantly, just having him throw fastballs, nothing else. Don’t worry about runners on base, don’t think about the count, just throw the ball as hard as you can. It worked.

In over 50 innings Dalko fanned 104 batters and walked only 11. The opposition scored exactly one earned run off him. He was ready for the big show.

This time spring training with the Orioles was something else. Reporters couldn’t find anyone else worth writing about and the future seemed bright for Steve Dalkowski. The photographer from Topps baseball cards showed up at the training camp in Miami and snapped a head shot of Dalko. When kids opened up fresh wax packs of ball cards that summer there was Steve Dalkowski, one of the four “1963 Rookie Stars” on card 496. But he never appeared in a major league game in 1963 or any other year.

At the end of spring training Dalko was informed he’d made the cut, was measured for a set of Orioles uniforms and took the field for the last exhibition game. Called on to pitch the ninth inning, Dalkowski fielded a bunt, threw the ball to first and heard a pop. His shoulder was done and so was his career.

He spent three years tumbling down the rungs of the minor leagues, a blur of sub-90 mph fastballs and scotch. At 26 he was out of baseball and couldn’t bring himself to return home. He dropped off the grid and picked fruit in California, dividing his time between itinerant work camps and the drunk tank. Somehow Frank Zupo, his old catcher from Stockton tracked him down and brought him home to New Britain. He dried out and even got to throw out the first pitch at a local minor league game (it bounced 20 feet in front of the plate). Then he disappeared again.

His sister brought him home for good and checked him into an assisted living home where he’s been since 1993. If any of Dalkowski’s pitching misadventures sound familiar, it may be because the guy who wrote to movie “Bull Durham” once played minor league ball for a manager who once played with – you guessed it – Steve Dalkowski.

2 thoughts on “Steve Dalkowski: For My Friend Terry Cannon”