In the course of my normal research and reading I will usually come across small tidbits about players that are in my “Card Ideas” manilla folders. I will make copies or notes and toss them in the appropriate file. When I get more than a handful of odds and ends, I create the player’s own manila folder. And just as before, I’ll throw in odds and ends I stumble upon. The next step comes when I’ll take it and probably 4 or 5 other manila files with me when I travel, go on vacation or sit in a coffee shop. On the plane, relaxing or gulping a black coffee, I’ll leaf through the folders and see if anything grabs me.

In the case of “Irish Jack,” I was interested in the John McGraw angle, because that was a very interesting time in history for the Giants and baseball. From the early 1900s, the Giants had been “America’s Team.” Their reputation for winning (10 pennants from 1904-1924) and great personalities and stars (John McGraw, Christy Mathewson) made them the most famous sports team in North America. Just glancing through the list of baseball clubs at all levels, from the Negro Leagues to small town teams, shows a disproportionate number who chose “Giants” as their nickname. To compare yourself to the Giants of the National League told your competition you meant business. However, by 1925 the Giants glory days had dried up. Not only was the team aging, but the whole way McGraw had his team play the game was antiquated. Babe Ruth and the home run had replaced the “inside baseball” method of hit and run that had made John McGraw and his Giants champions. Fans now flocked to Yankee Stadium instead of the Polo Grounds, and the Yanks had displaced the Giants as New York’s favorite team. McGraw became desperate to rebuild his ball club and actively scouted the country trying to find the players who would get his Giants back on top again.

This history in mind, I decided to look further into “Irish Jack” and what he did for McGraw and the Giants.

First stop was my library. 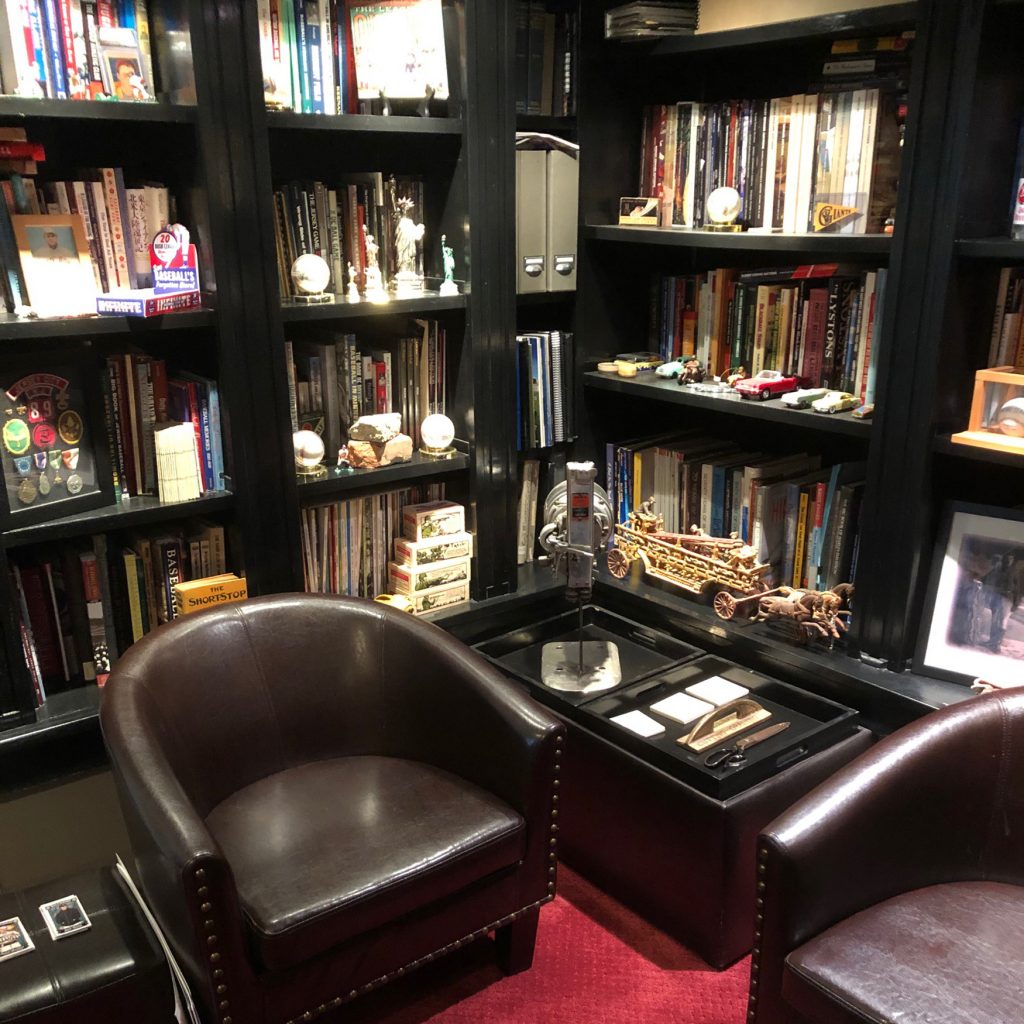 Figuring ol’ “Irish Jack” probably made an appearance or two for the Giants at the end of the 1927 season, I reached for my copy of The Baseball Encyclopedia.

Today this one time indispensable tome of baseball knowledge has been rendered obsolete by the internet, but for old time Major League stats I still pull this dinosaur down from its shelf to use. 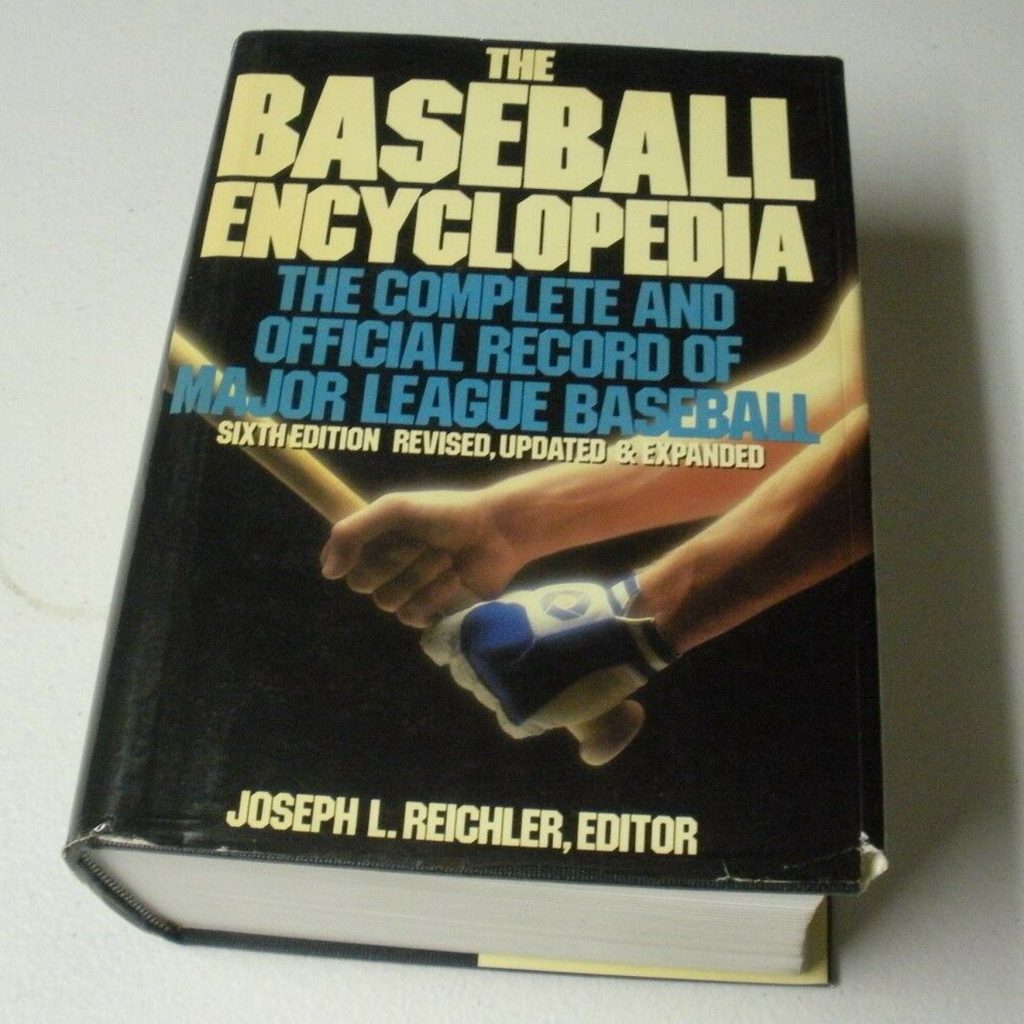 First thing I did was go to the pitchers section of the book and looked for Jack LeRoy. Lerch, Randy – LeRoy, Louis – Lersch, Barry – but no Jack LeRoy. In fact there was no LeRoy’s in the batter’s section whose career fit the 1927 timeline, either. 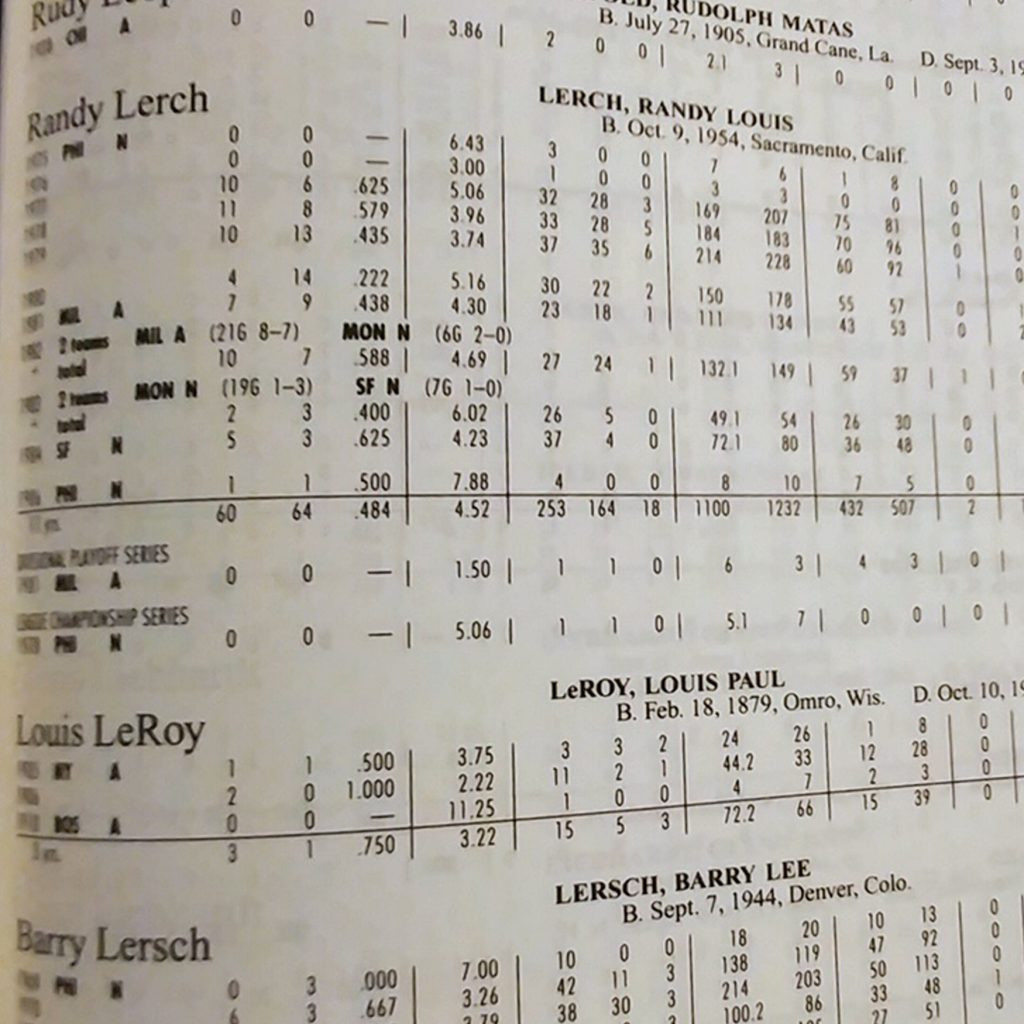 Refusing to give up that quick, I thumbed the pages until I got to the section on team rosters. The 1927 Giants show no player by that name or anything that close to it. A few pages further to check the 1928 roster yielded the same result. Hmmm. 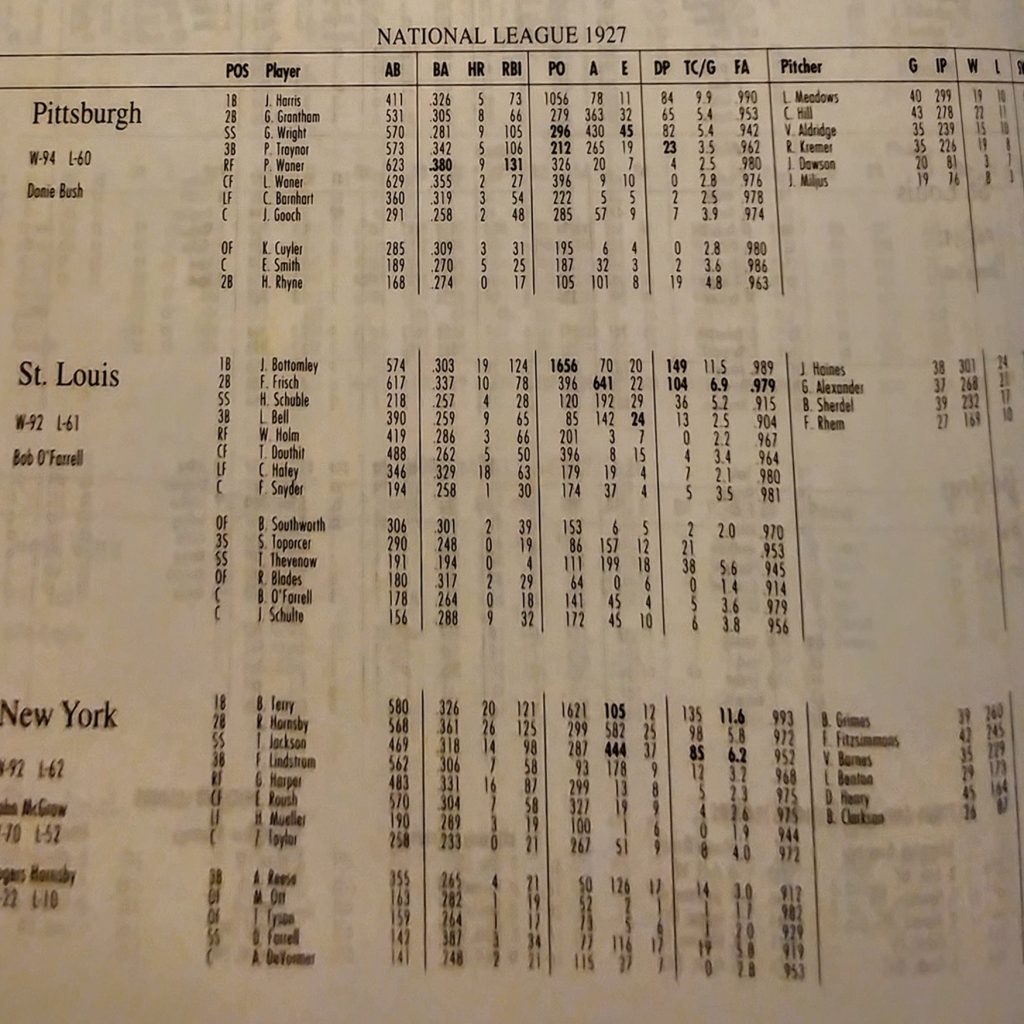 Next stop was the Baseball Reference minor leagues database. This internet site has revolutionized baseball research, and unlike any other reference I can think of, it also includes the minor leagues, some (albeit very flawed) Negro Leagues plus Mexican, Cuban and Japanese leagues. Pre-internet, there was simply no one-stop book big enough for all those kinds of stats. It’s a begrudging nod I’ll give to the digital age. However, again, no Jack LeRoy, Irish or no Irish. Now it was getting interesting.

I went back to the contemporary newspapers. I subscribe to four or five online newspaper databases that gives me access to thousands of newspapers right from the safety of my desk. Among the ones I use the most are Newspapers.com, Newspaperarchive.com and GenealogyBank.com.

Newspapers.com is a great general site that is probably the one most are familiar with. The search engine they use is the easiest of all the databases. Newspaperarchive.com is a bit trickier to search with, but when you get the hand of it you’ll find it has a different selection than Newspapers.com. For me, the biggest benefit is that it has all the Sporting News issues. That alone is worth the price of admission – although some of the 1920s volumes are very poorly digitized to be almost useless except if you want to blind yourself. GenealogyBank.com is a very serviceable third option that also has newspapers the other two do not.

For those who can not access the pay sites, there are a few free newspaper databases out there. The big one is FultonHistory.com. From what I understand, this is a one-man quest to digitize as many newspapers as he can. It used to be New York City-centric, but in the more recent years he has branched out to more regions. The search engine is very tricky, but if you are patient, you can get some hits that you wont find anywhere else. A third-party search engine for this site, FultonSearch.org, might be a better option. Another free site is ChroniclingAmerica.loc.gov from the Library of Congress. I don’t use this one very often because I find the search options limited and frustrating – but it is free, so there’s that. Though I haven’t used it to any degree of success yet, the Library of Congress just added an image search to Chronicaling America called News-Navigator.labs.loc.gov (I tried Jake Levy and got zero hits). You may also find that your state has free vintage newspaper archives. I live in Kentucky and found that the state has digitized a number of small town papers.

I am fortunate in that my wife is a university professor, which besides having a brilliant partner, I also have access to all the institutional databases that her university offers. ProQuest is one institutional newspaper resource that most colleges and major libraries offer access to. I happen to do some Chinese baseball history work and use a source called Brill. It’s a very specialized database, but it shows one of many options that are available only through institutions. One of the best institutional databases that I use are the ones that offer obscure magazines and scholarly journals. In addition to my wife, one of my best friends happens to be a librarian at a different university. He’s an unsurpassed expert at ferreting out hard to find and out of print books as well as copies of the most arcane articles (nothing will ever top the 12-hour turnaround time for a copy of a March 1962 Polish American Journal!).


Using Newspapers.com, I went back to the late summer of 1927 and keyed in “Jack LeRoy” and “Giants.” I found the original story I came across years earlier as well as further stories about LeRoy and his 1927 season with the Charlotte Hornets. There was even a story on how McGraw himself traveled to Charlotte to see his $10,000 investment in action as well as photos of the Giants manager and “Irish Jack” shaking hands. 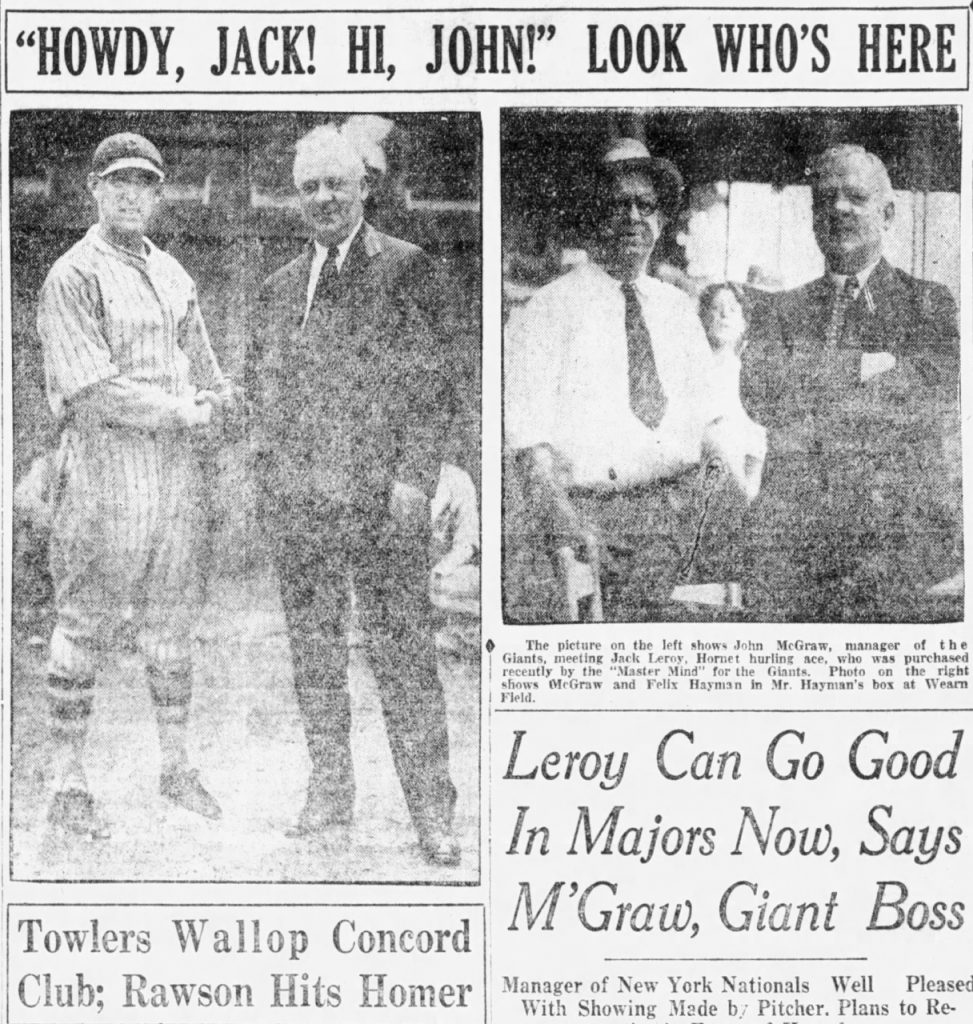 There was syndicated stories that reported Jack LeRoy was headed to New York to Join the Giants, but then, much to my surprise, I found out that while the pitcher McGraw signed did indeed show up in New York, “Irish Jack LeRoy” didn’t.

I know, it’s a little confusing.

See, the pitcher the Giants signed was not Irish, nor was his name LeRoy. He was, in fact, Jake Levy, a Jew from Birmingham, and McGraw wanted him to attract the thousands of Jews living in New York to his ballpark. 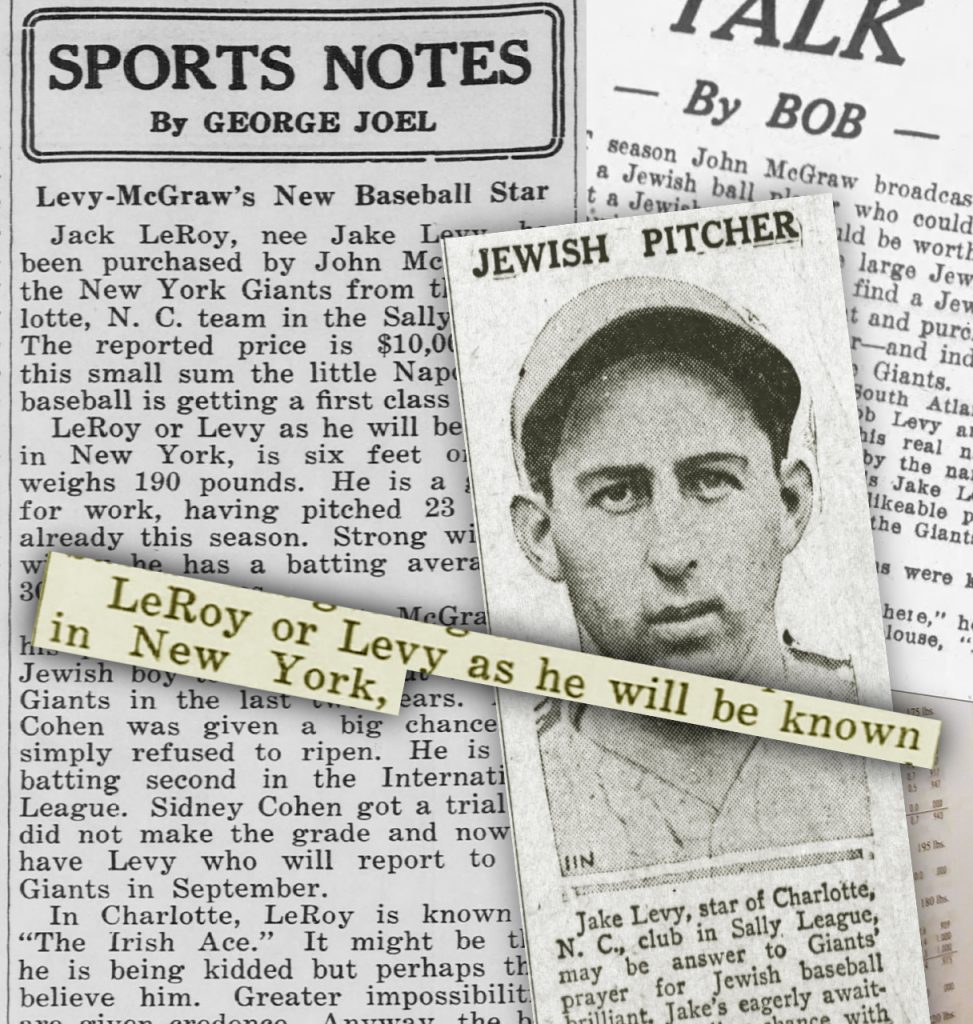