Armed with the knowledge that I was dealing with a guy playing under two different names, one of which being his given Jewish name, I went back to my library. Fortunately, there has been much written about the history of Jews and baseball. I went for my three go-to volumes: The Big Book of Jewish Baseball by Peter and Joachim Horvitz, Jews and Baseball: Volume 1 by Burton and Juanita Boxerman and The Baseball Talmud by Howard Megdal. The first book I have in paperback while the other two I own on my Kindle. If you do not own one of these readers, I highly recommend them. Though I do miss handling a real book, my Kindle has a great search option that is many times better than a conventional index. It shaves countless time off research when I’m looking for one lone obscure fact or reference. 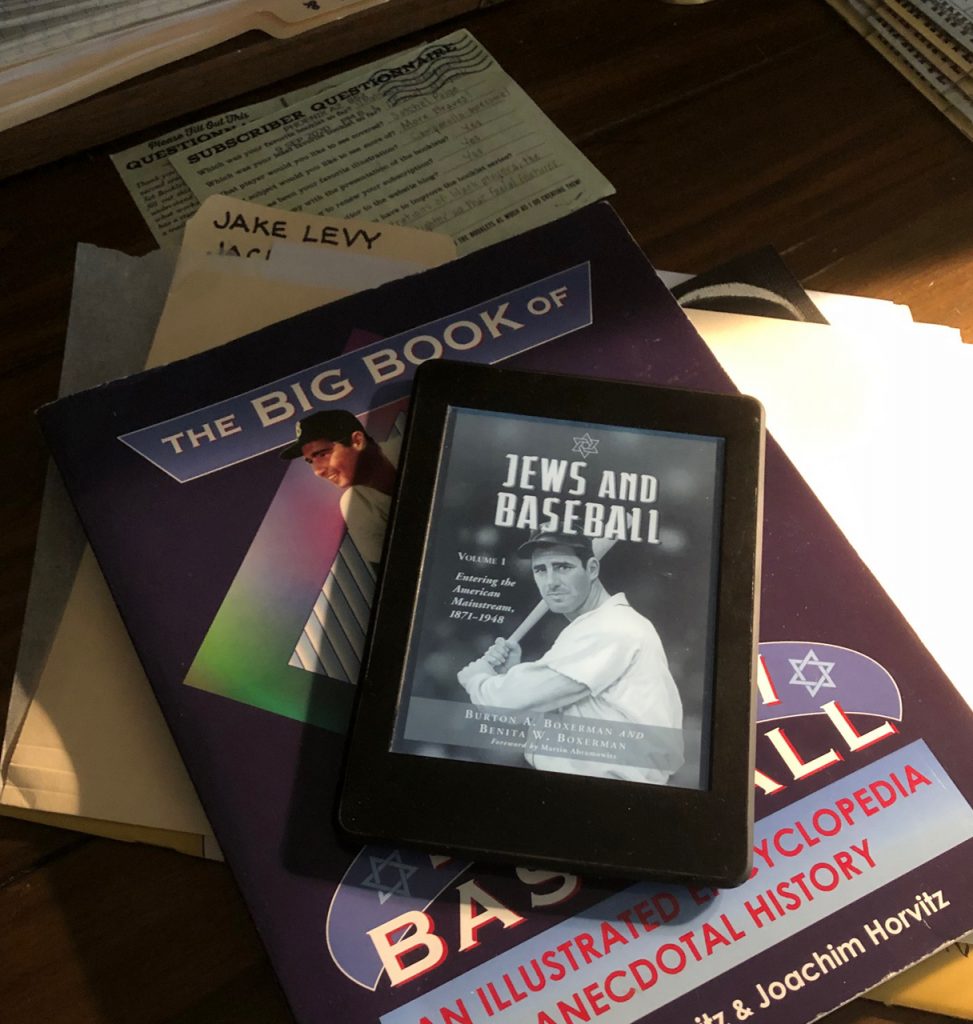 From these books, I was able to add to what I already knew about why John McGraw was so hepped up to sign a Jewish ballplayer.

For the two decades John McGraw had been running the New York Giants, he’d watched the Jewish population of New York City explode with the influx of immigrants fleeing Europe. And he noticed the large Jewish fan base who supported his Giants. But still, McGraw felt that this potential fan base was not yet tapped to its fullest extent; in fact his fanbase was jumping ship at an alarming rate. According to Jews and Baseball: Volume 1, the Giants lost 100,000 fans from 1922 to 1923 alone. And this was in years the Giants won two pennants and a World Series. With his team on the downslide, McGraw needed a Hail Mary to win back the fans. To do that, McGraw knew needed one thing: a Jewish star in a Giants uniform.

So, when John McGraw’s scouts heard of a talented Jewish righthander down in Charlotte burning up the South Atlantic League, it’s no wonder he jumped at the chance to sign him. There was just one technical problem: he was playing under an Irish name instead of his own.

For the background of Jacob Levy’s life, the first place I went was to Ancestry.com. Years ago you used to have to go to either a big city library or a Latter-day Saints genealogical research center to get hard to find family trees, immigration information and census records. Now Ancestry has all of that and more right at the push of a button. What I couldn’t find out on the website, I was able to obtain by contacting a relative of Jake’s who I also found through the Ancestry website. It’s crazy to think that just decades ago my contacting a relative through the mail would have taken weeks – via email it took hours. 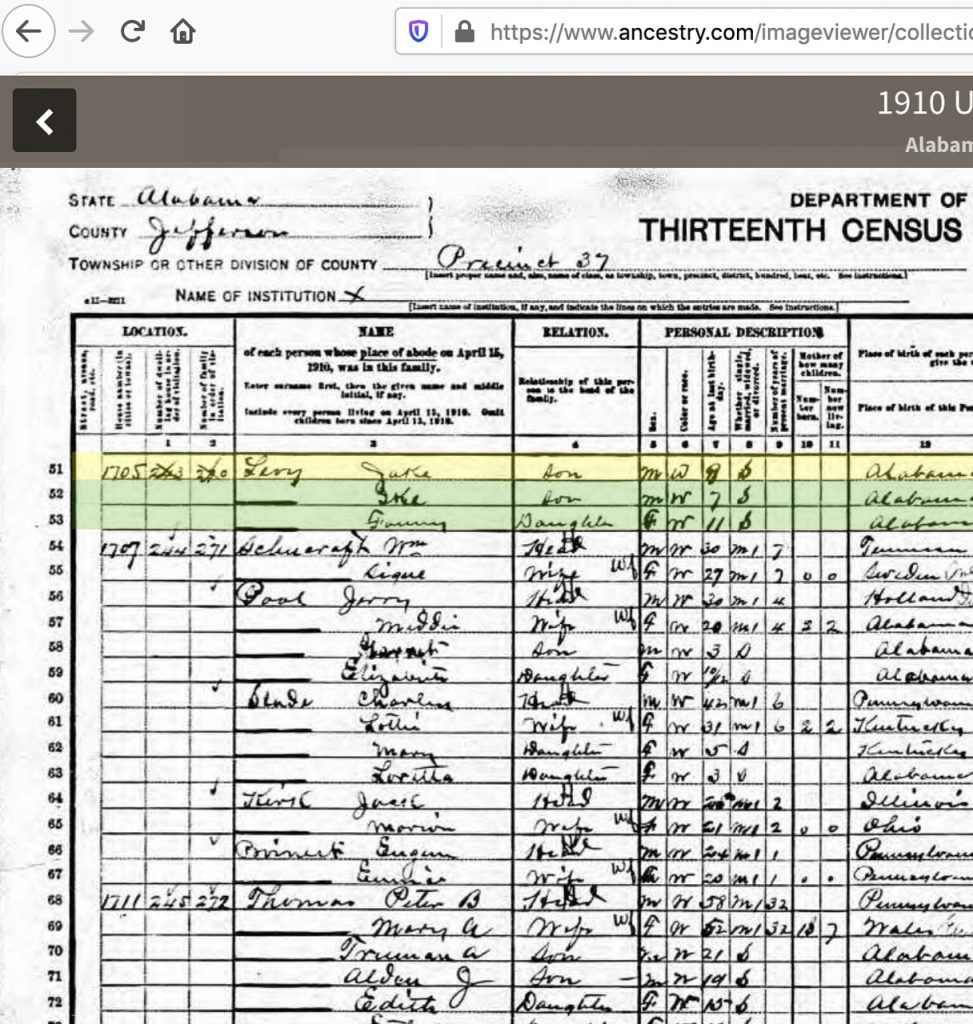 Jacob Leroy Levy was born on February 6, 1900 in Birmingham, Alabama. His father emigrated from Russian Poland in 1893, and two year later after saving enough, sent for his wife Jennie and three Polish-born sons, Joe, Louis and Henry. The Levy’s added three American-born children to their family, Fanny in 1897, Jacob in 1900 and Irving in 1901.

To get the skinny on Jake’s early baseball career, I went back to the online news archives I subscribe to. With a few keyword searches, it wasn’t all that hard to find out Jake’s high school and the circumstances of his turning pro. Normally I would tap into Baseball-Reference, but in this case it wasn’t any help. Jake’s early seasons of pro ball was spent with several teams that even Baseball-Reference doesn’t have stats for. Fortunately, I was able to piece together a good idea from the newspaper archive sites. 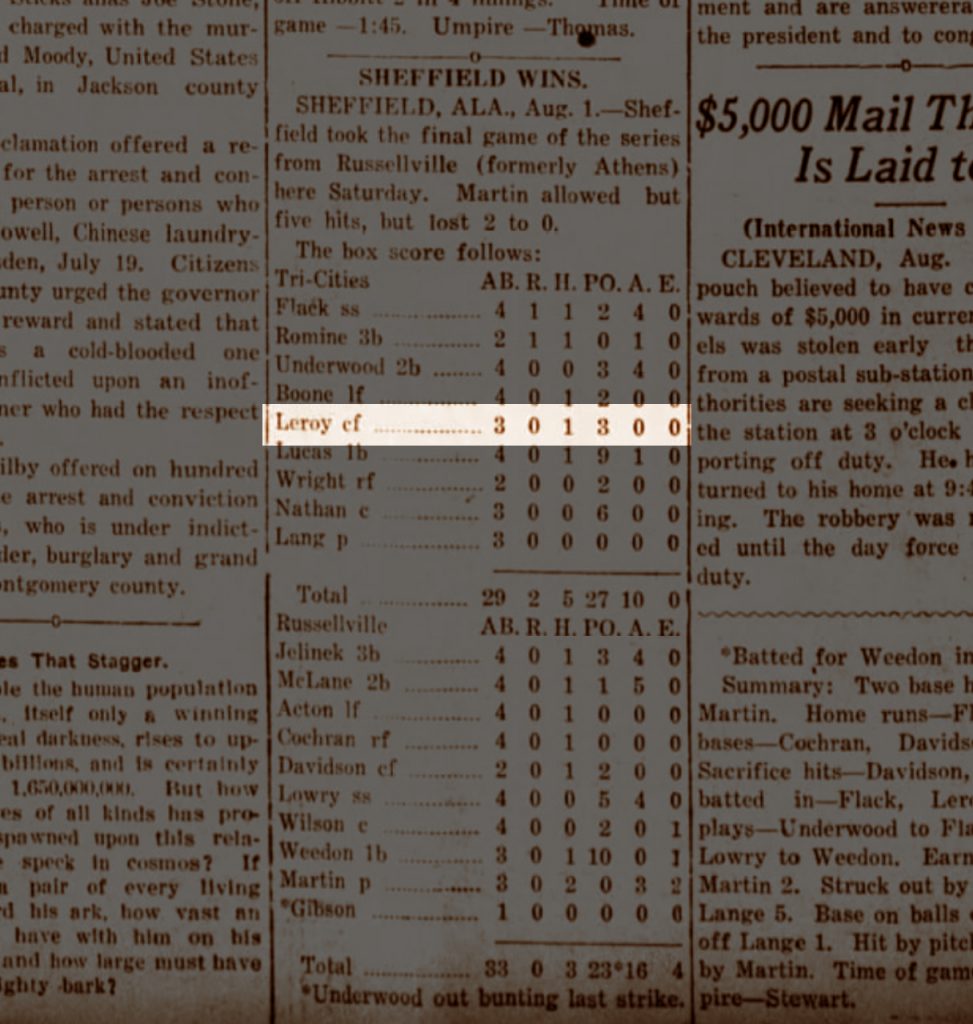 Like most kids in his day, Jacob learned baseball. By the time he was at Birmingham’s Central High, Jake, as he was now known, was the school’s star pitcher. Years later a former classmate, J.B. Watson, reminisced about Jake to a reporter for the Knoxville Journal, “we had a pitcher named Jake Levy who threw the spitter. He chewed something called “slippery elm” to get nice thick juice.” And, “I could stand at shortstop or in the outfield and see the stuff flying from the all in all directions all the way from Jake’s hand to the plate.”

From Central High Jake graduated to the local Birmingham sandlots. Although he was recruited by professional clubs, Jake turned down their offers in deference to his parent’s wishes. Fortunately, there were other options other than turning pro. Just as in most cities across America, Birmingham had a thriving semi-pro scene. Teams of future pros, college athletes and former big leaguers played for teams sponsored by large companies, railroads or municipalities. Jake signed on with the Birmingham Railway, Light & Power Company (BRL&P) team. There he played with a fast crowd that included future major league stars Joe Sewell, Riggs Stephenson and Ike Boone. Jake’s reputation earned him his first professional contract in 1921 when he signed on with the Tri-Cities Triplets of the Alabama-Tennessee League. It looks like this was the point when Jake dropped the “Levy” from his name and chose “Jack LeRoy” as his nom de baseball. 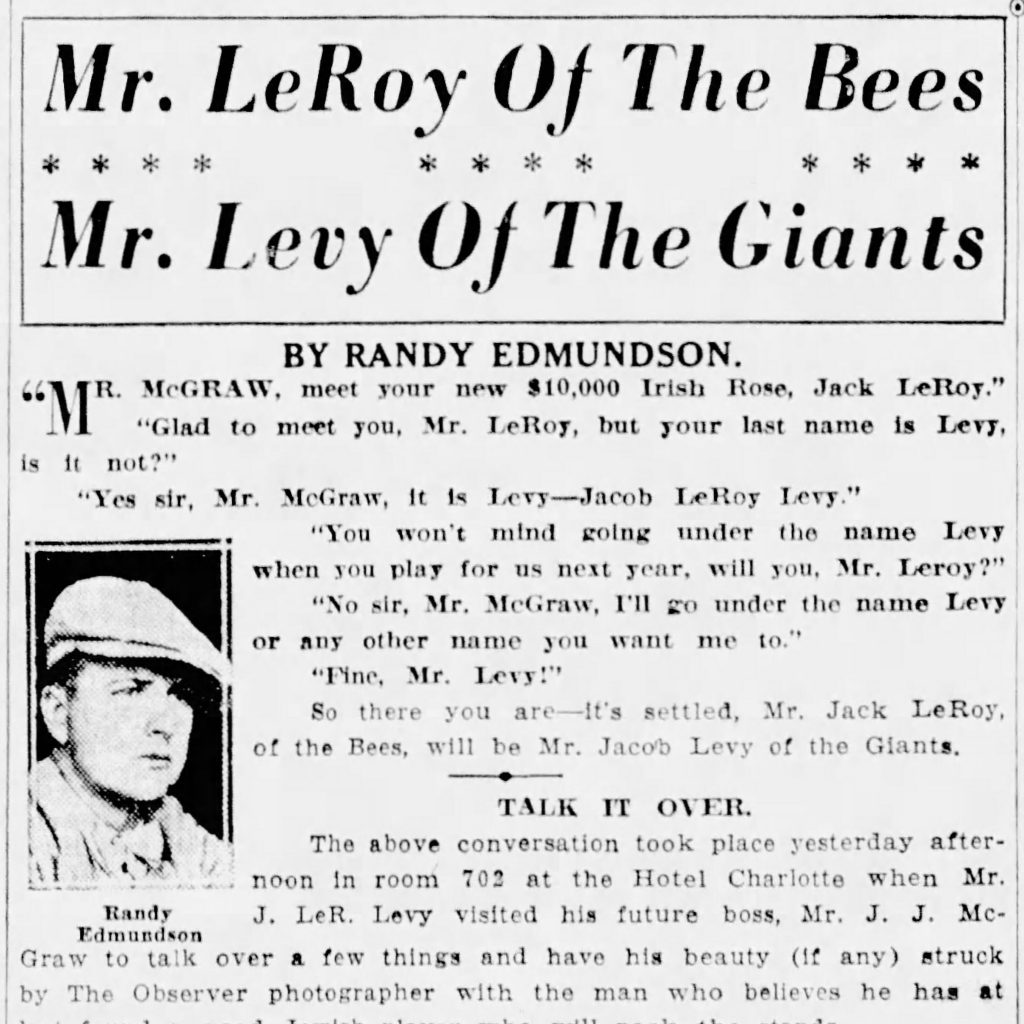 That Jake Levy would become Jack LeRoy when he turned pro was not out of the ordinary for the time. Countless athletes who had ethnic surnames changed them to more “Americanized” versions. Poles, Russians and Italians commonly exchanged their long, unpronounceable names to ones that read better in the sports pages and avoided any nasty ethnic heckling. Thus, Aloysius Szymanski became Al Simmons, John Paveskovich became Johnny Pesky and Francesco Pezzolo became Ping Bodie.

However, blending in was the last thing John McGraw had in mind when he signed Jack LeRoy in 1927. As soon as the ink dried on his contract, Irish Jack LeRoy disappeared from history and the Giants newest prospect reemerged as Jake Levy.