Once I’ve dug up a good amount of research with which to write my story, I begin a parallel search for good visuals to use for my illustration. If I regularly worked on players like Babe Ruth and Stan Musial, this step would be a breeze, but I tend to gravitate towards the more obscure. This, of course, makes finding visual reference much more difficult.

I start the search by just going through my player’s manila folder. If at any point I have come across a newspaper photo of the guy, I would have made sure to have copied it and tossed it in the folder. Being newspaper pictures which were transferred to microfilm and then to digital, very often the resolution and contrast is terrible. But, even if the photo is dark or blurry, sometimes it is helpful to get a glimpse of how a player carried himself, swung a bat or threw a ball. It’s these little details which I think differentiates my work from other sports artists. Instead of basing my illustration on a single photo, I generate my drawings from my knowledge of a player’s personality, style and story which combine with as much photo reference I can find to create an image that has never been seen before. 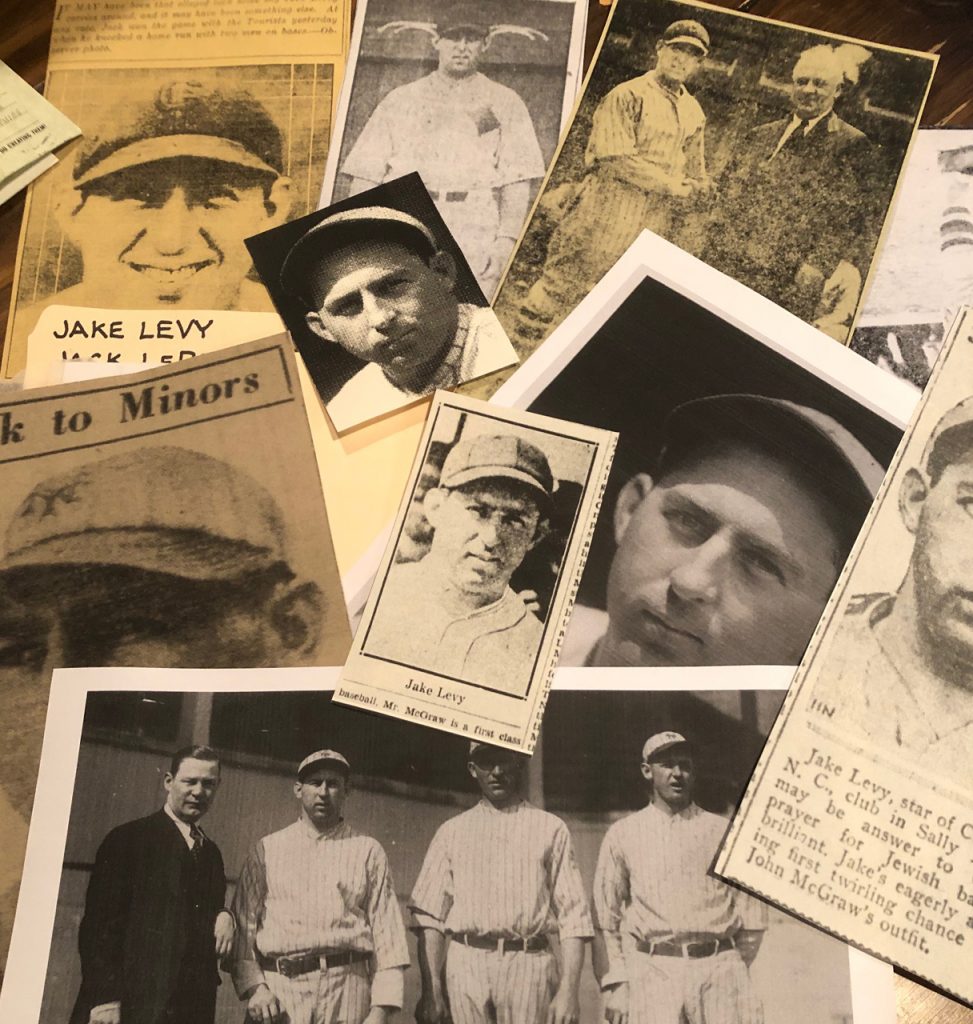 With that in mind, I gathered all the photos I have in Jake’s folder. As you can see, some are ok to work from, while others are dark and blurry.

From this point, I will go to my library again. I try to keep on hand as many books possible that deal with the more obscure leagues and players. For run of the mill MLB stuff I can either find it online or at the Cincinnati Public Library. But, if I want to find a player from, say, the 1928 Baltimore Black Sox, or the 1909 New Orleans Pelicans, I will likely have that on a shelf in my library. Although Horvitz & Horvitz’s The Big Book of Jewish Baseball has a small entry for Jake Levy, there is no picture of him. Having to go deeper, I did a quick look at all the teams he played with over the years (and as you’ll see, it was a lot!) and figured out if I had a book handy that would have an image of him. A quick go to Baseball-Reference gave me a pretty good (though incomplete) list of Jake’s teams. 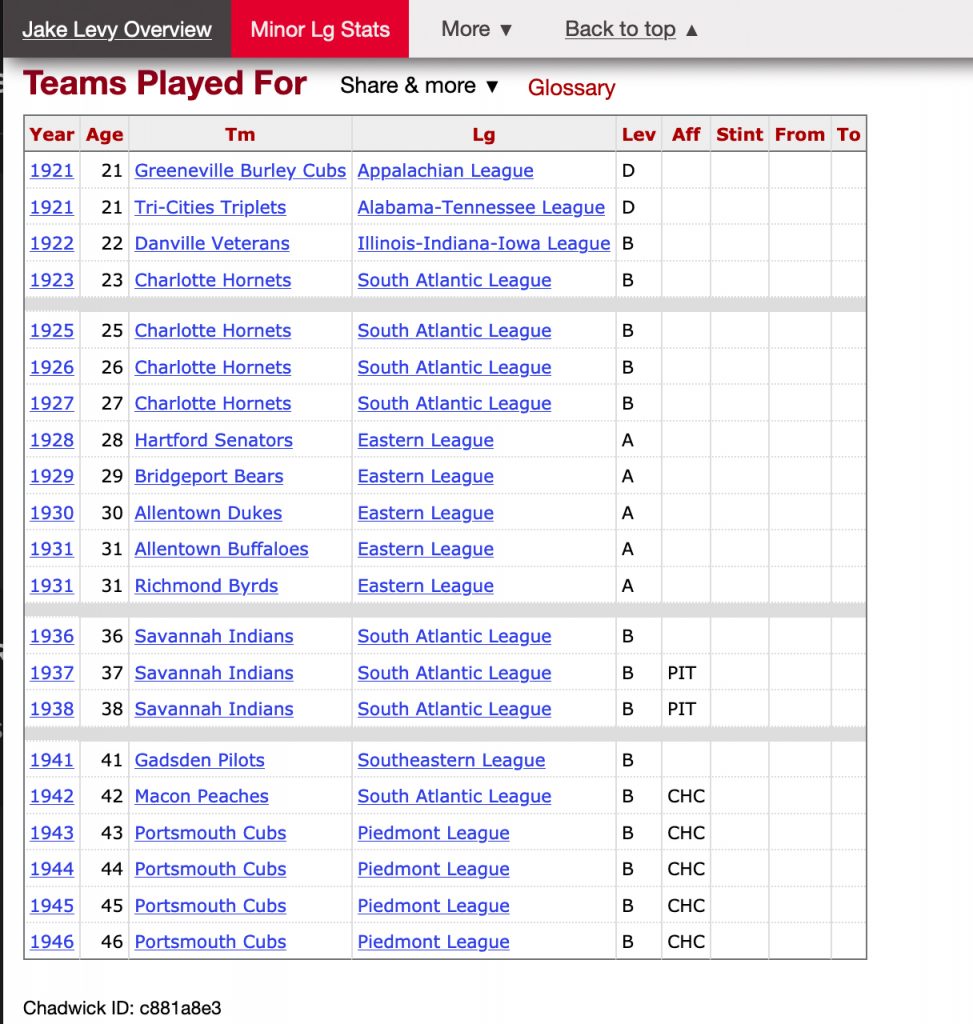 Armed with this list of teams, I figured I’d concentrate on the 1923-1930 period of his career. I want to depict Jake during his hotshot seasons in Charlotte, so I had to keep the search narrow so he wouldn’t be too aged. Ballplayers in Jake’s time really suffered from all their time in the sun and by the time a guy got to thirty he could look a decade or more older than he was.

A great place for images of the more obscure teams are the old Spalding and Reach guides. Published every spring since before the turn of the century, these thick volumes have team photos of not just major league teams, but also many minor league and semi-pro clubs. Usually when these come up for sale they are expensive, but if you keep an eye open you’d be surprised to find them on the cheap at rummage sales and used book stores. Additionally, I’m fortunate in that the Cincinnati Library has many of these guides in their reference section as well. Even better, there is a website, SeanLahman.com, which has links to digital copies of many of these old guides. The guides are digitized by a variety of institutions and libraries and some of their search engines are a bit clunky to use, but if you have the patience, you can find what you’re looking for. 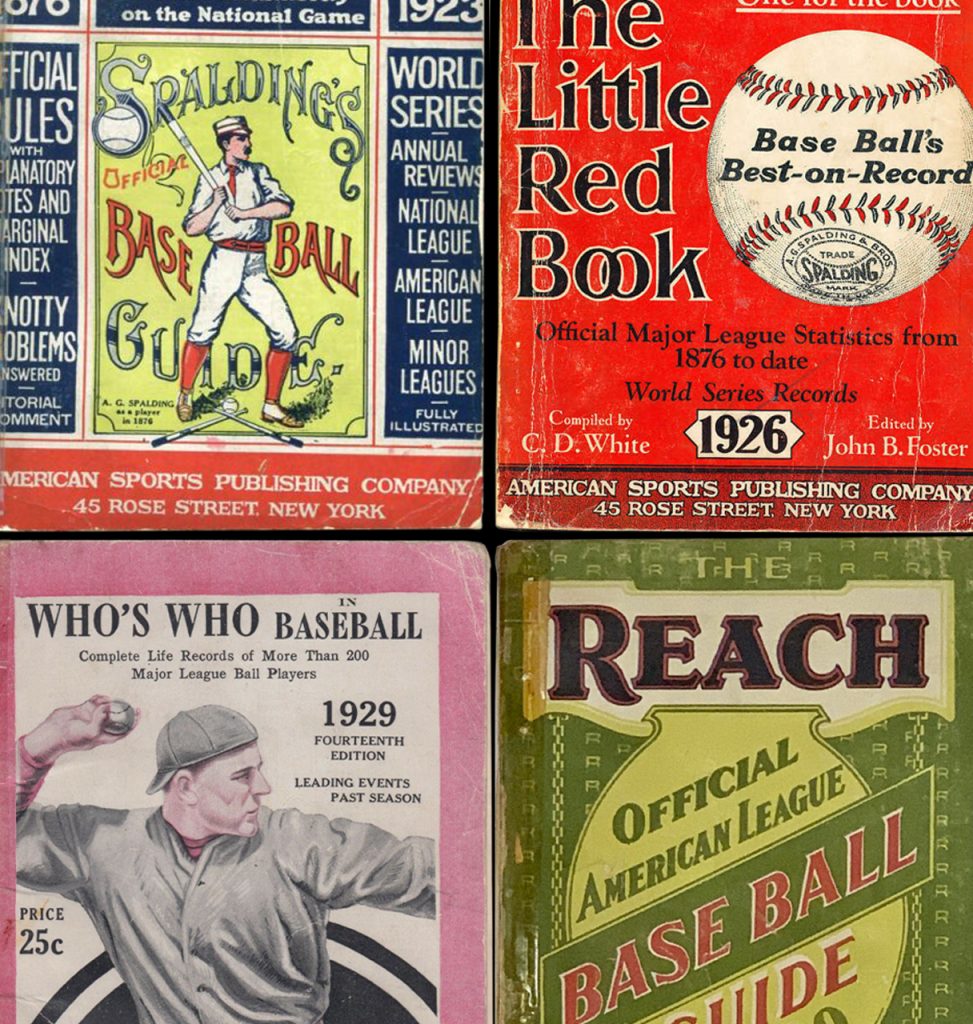 Searching for an image of Jake, I hit pay dirt in the 1923 and 1930 Spalding Guides. 1923 shows him in his first season in Charlotte and 1930 captures him with the Allentown Dukes. Unfortunately I can’t claim to have found them in my own collection of guides, but I actually found them on an auction database site called Worthpoint.com. Worthpoint collects all kinds of past auction sales. The photos I needed were courtesy of an eBay knucklehead who cuts up hundreds of these priceless old baseball guides and sells the individual pages for a few bucks a piece. To add insult to injury, the clown can’t even cut straight. I hate to give this guy any publicity, but I have to admit that in this case it did help me out. 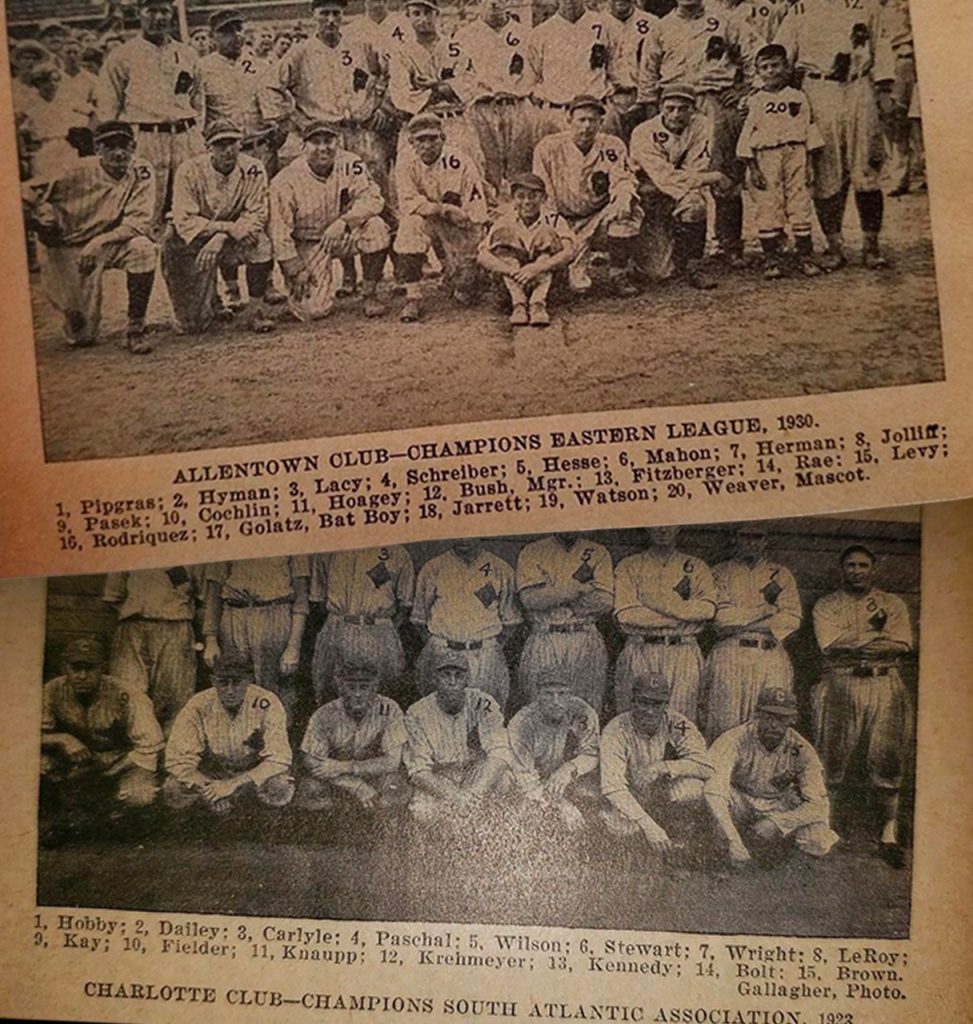 The downside to these old guides are the images are very small and the facial features are often unrecognizable. Even with their drawbacks, these guides do give us an idea of not only how a player carries himself, wears his cap or even if he is left or right handed, one can also make out uniform details for these often forgotten teams.

There are two other online sources I will check when looking for visuals. One is eBay. It seems like at one time or another, anything you’d ever seek in your life has been sold or is currently for sale on eBay. In Jake’s case, I didn’t find any photos, but I did grab something else that will come into play later on for writing his story.

The other online resource are auction sites. The Cadillac of vintage baseball photographs is RMY Auctions. While all sports auction houses sell photos, they often only deal in big name players, and if lesser known players do show up, they’re always bundled together in a larger lot with images you don’t want. On the other hand, in addition to iconic images that they sell for thousands, RMY handles all kinds of hard to find players. With the digitalization of archives and the death of many newspapers, there has been an unprecedented availability of old press photos on the market. Without RMY, many of these photos would have been lost to time. Using their search engine is fast and simple, and if you’re lucky, you might find what you’re looking for. And the best thing about RMY is that many of the photos in the their auctions are very affordable. In my case, before I knew it I found myself with a decent little original vintage baseball photography collection! In Jake’s case, I found that they recently did have a nice clean copy of one of the cropped newspaper photos I had in my manila folder. 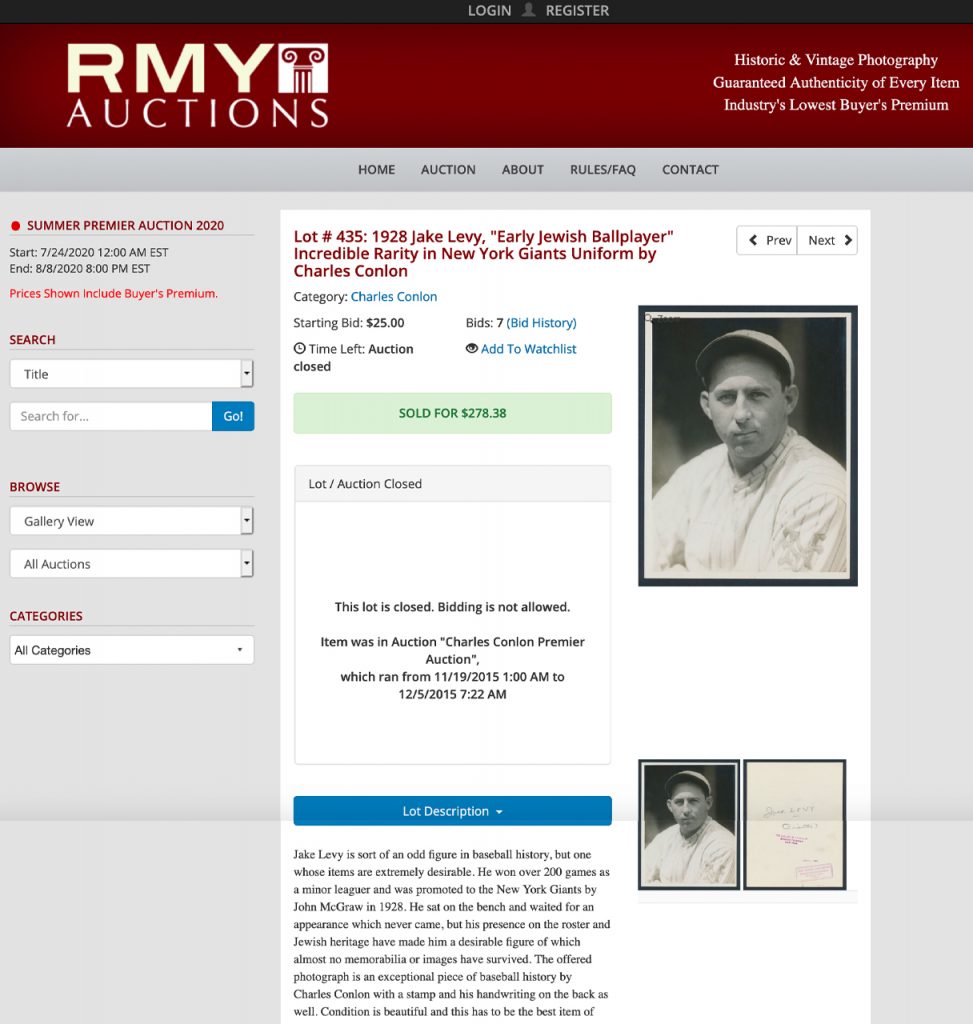 Spreading all the photographs I could dig up in front of me on my drawing table, I can now begin to make Jake Levy come alive.