When it comes time to begin the drawing process, I try to make sure I have all the elements in front of me that I will need to make the illustration as accurate as possible. Like I showed you in the previous installment, I begin with any actual facial images of the player that I can find. That accomplished, I try to find and identify the tiny details that help capture the essence of a particular player.

While baseball players on the same team wear the same uniform, there’s little things that players do, either conscious or unconscious, that makes them distinct from their teammates. A very cool case-in-point is the peculiar way Mexican-American pitcher Adolfo Arguijo would modified the brim of his ball cap. In Jake’s case, after careful study of the photos I had, there was no glaring “personal flair” evident. Looking closer, a few minute, yet important, details begin to emerge.

One is the way Jake Levy wore his belt buckle. Everyone who played baseball or watched the game knows that one thing that makes baseball pants different is the “belt tunnels” on the sides of the waist. These came about around the 1910s so ballplayers could tuck their belt buckles inside so they don’t get in the way while making a play or sliding. Of course, not every ballplayer did so, and a player’s particular placement of their buckle, whether in the front or on the left or right side, inadvertently made them unique. Looking over several photos of Jake from 1925 to 1928, it becomes obvious that Jake favored his in front, off to his right side. 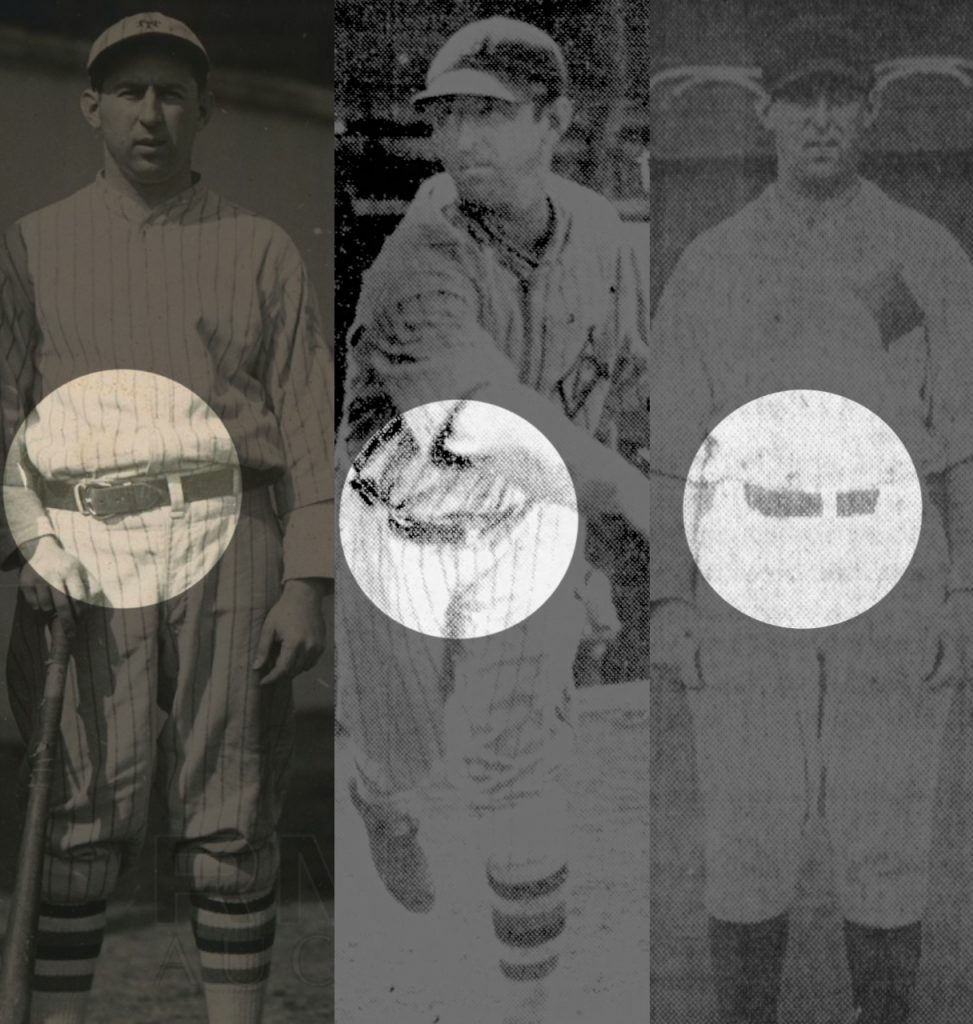 Another thing that typically made a player stand out from the pack was the length of his sleeves. Think Ted Williams or Ted Kluszewski and how they cut their sleeves short. Back in the teens and twenties, companies like Spalding offered their jerseys with different sleeve lengths. The longer, below the elbow length were typically donned by pitchers, while the shorter length was favored by fielders. Some players even did “clubhouse modifications” such as leaving one sleeve long and the other short. Take a look at an old team photo and you’ll see what I mean. Looking at photos of Jake one can see that in the 1923-1928 period he favored his sleeves right at, or slightly below, his elbow. I know something so minute like this doesn’t seem significant, but just think of how off a portrait of Ted Williams would look if the sleeves of his uniform were long and billowing – or a drawing of Manny Ramirez had him sporting stirrups instead of his trademark baggy ice cream man pants. Understand now? 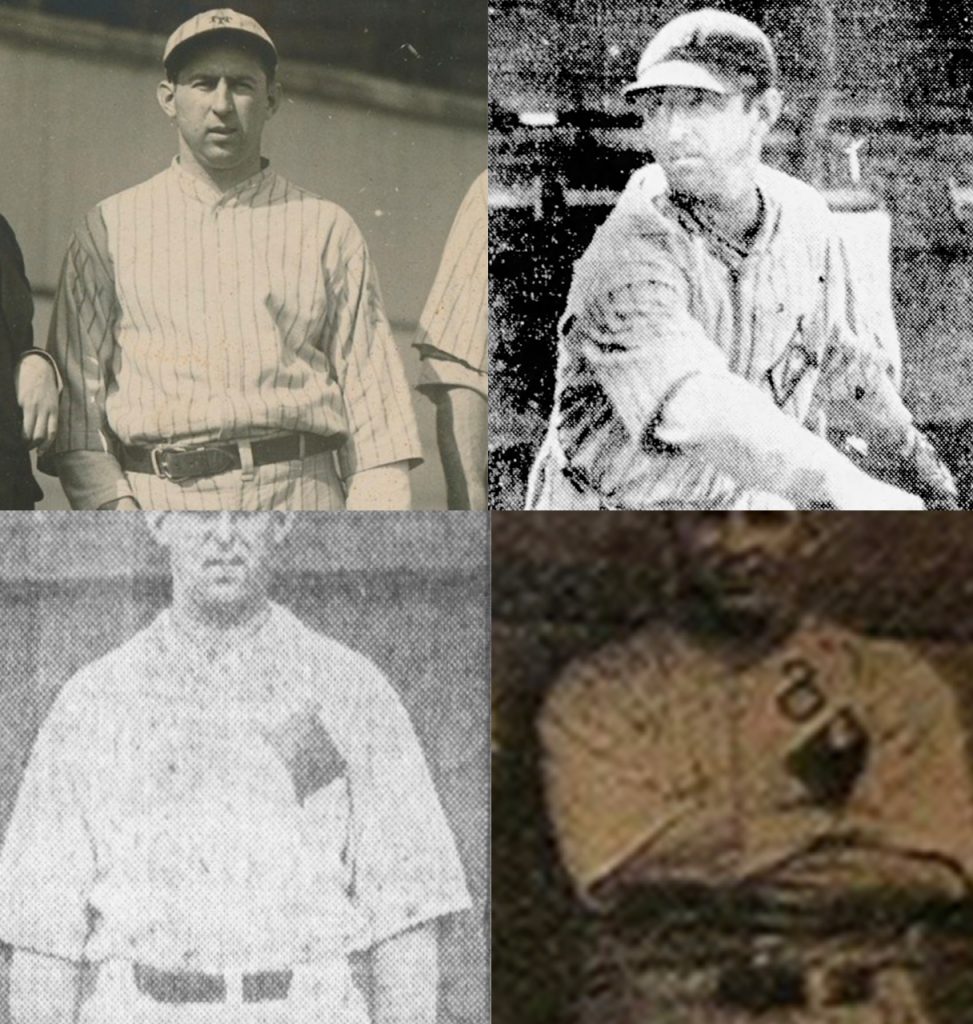 Another personal trademark that I normally look for is the way a player wore his cap. Some players pull it down low all the time, like Joe Jackson did, or keep it back on their head, like Yankees pitcher Red Ruffing. Unfortunately, this is a trait that went away with the introduction of the tin can stiff caps worn today which don’t lend themselves to any kind of personal modification. If you tried tilting one of the modern fitteds back on your head it would fall off. Tilt it too low and forward and you’ll cut your forehead on the hard brim. Anyway, back to Jake – a look at him over the 1923-1928 period shows him wearing his cap both low and tilted back. So the cap’s a wildcard with Jake. 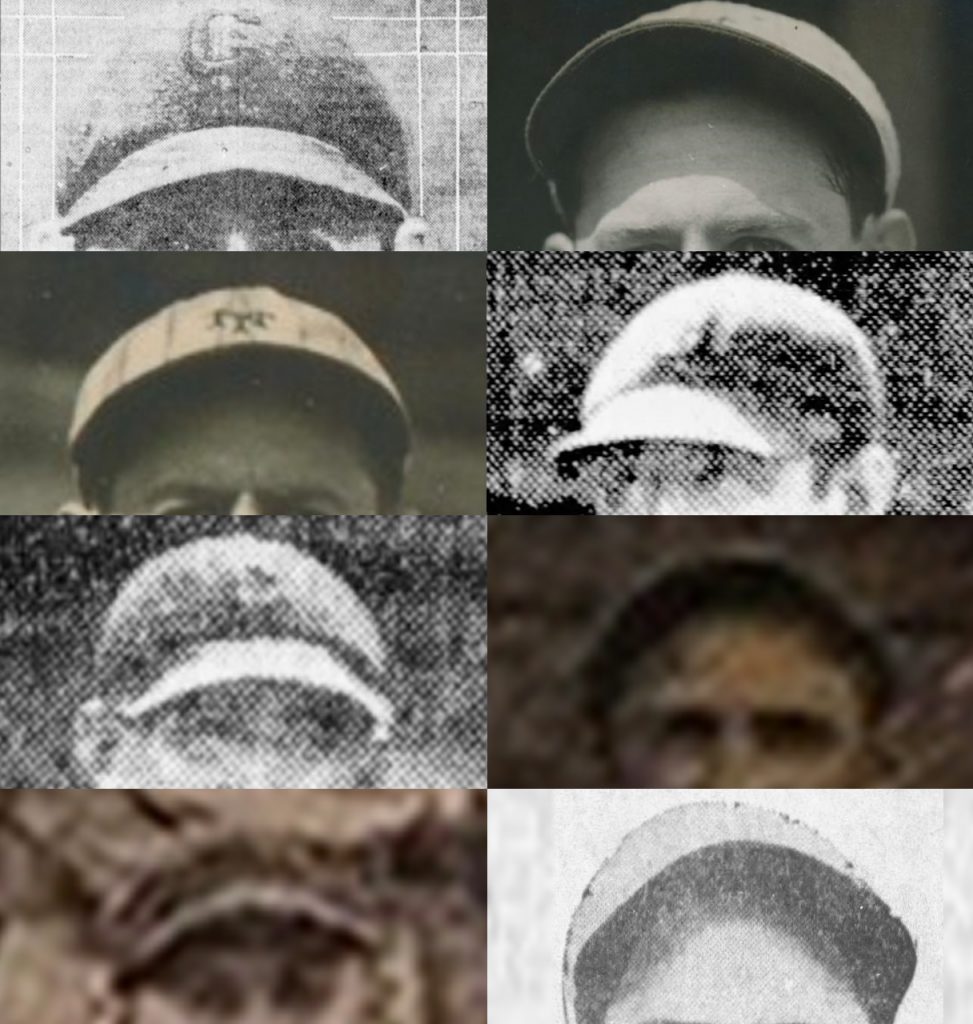 One of the bigger details that I particularly enjoy working on is the uniform. Unlike today where most sports logos look like they were computer generated by the same company, back in baseball’s golden years the variety was simply amazing. Sure, there were some boring block letter-only jobs, but there were so many others with such wonderful creativity that added a certain panache to baseball that no other sport could match. Partly this came from there being so many small companies that manufactured baseball uniforms back then. With so much competition, companies were more willing to get creative with what they offered. Plus, there were many more artists and designers that could hand-letter unique designs. Computers pretty much destroyed the custom or hand-drawn lettering market – just look at the Colorado Rockies or Tampa Bay Rays – anyone with Microsoft Word could typeset the “logos” they wear on their jerseys.

For Jake Levy, I knew I wanted to depict him playing for the Charlotte Hornets. A look at the photo reference already assembled in his manila folder shows several different years worth of jersey and cap designs. For all the years he played in Charlotte, the Hornets wore pinstriped uniforms that had the same basic logo featured prominently on the left chest – a “C” inside a diamond. Photos I could find from 1923 and 1925 show this design in a dark color on top of a slightly lighter diamond. There was no piping on the front, collar, sleeve ends or pants. What I believe is a 1926 photo shows this same logo, this time without the color behind it, with the addition of piping on the front, collar and pants. A definitively 1927-dated photo shows the same piping but this time the logo appears to be in a light color on a dark colored diamond. So, for uniform options there is a lot to go with. 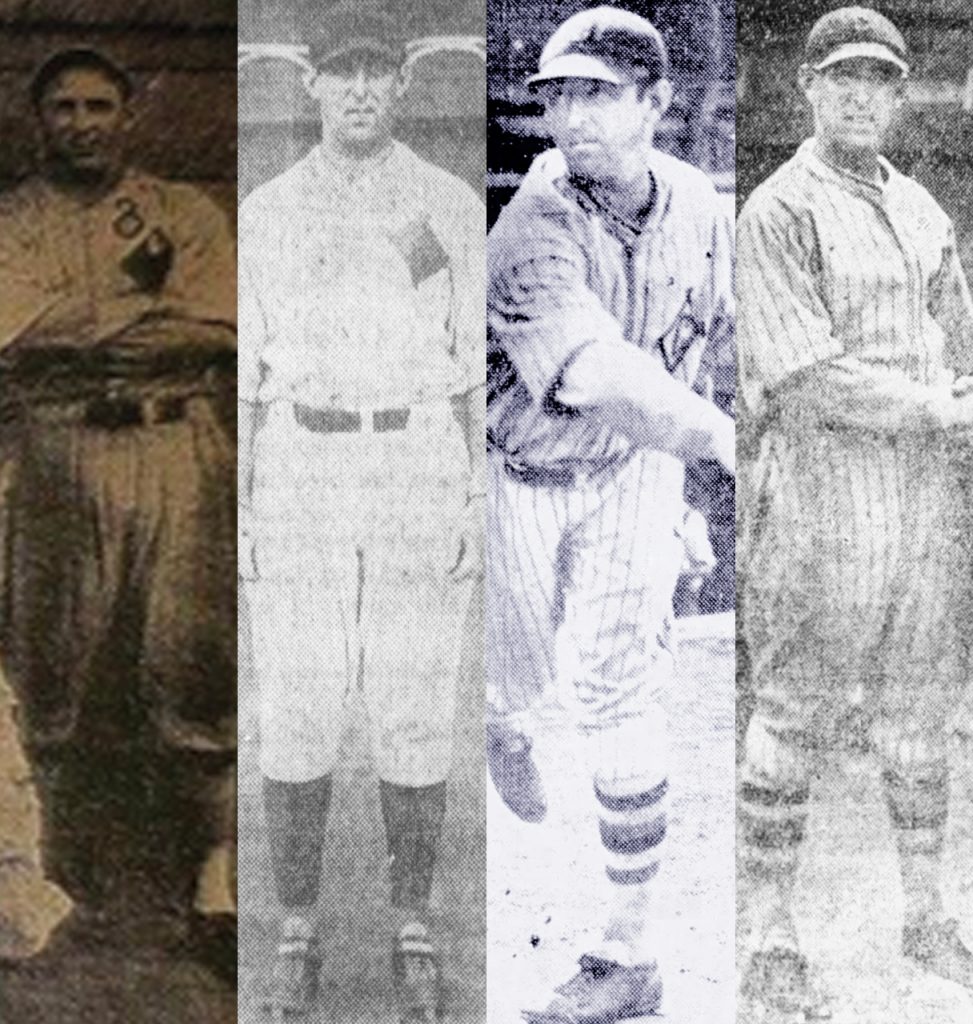 The final part is the most difficult: color. Because of Marc Okkonen revolutionary 1991 book, Baseball Uniforms of the 20th Century, it’s pretty easy to find out what colors MLB teams wore. Except when a team was called the “Blue Sox” or the “Reds,” it gets much, much harder when it comes to the minors and Negro Leagues which were not as well documented. The first step I take when stuck on a color scheme is go to my library and pull down the box with the Cooperstown Ballcap and Ebbets Field Flannels catalogs. Cooperstown Ballcap made old-style caps since the 1980s and each year put out a catalog that featured hundreds and hundreds of caps. Will Arlt, the owner, was a great friend of mine (he passed away last year), and spent a lifetime studying vintage baseball design, so I lean heavily on his vast catalog of historic caps when it comes to color. Jerry Cohen at Ebbets Field has done a great job as well recreating historic jerseys, but even he admits that many times the colors are just a good guess. For what it’s worth, Cooperstown has a 1916 cap with black and white colors and a 1950 cap with black and golden yellow. While Ebbets Field Flannels has done two different Charlotte jerseys, they date from the 1950s and 60s when they used the colors of their parent Senators and Twins of which they were a farm team. In Jake’s time, the Hornets were independent so were free to choose their own colors and logo. 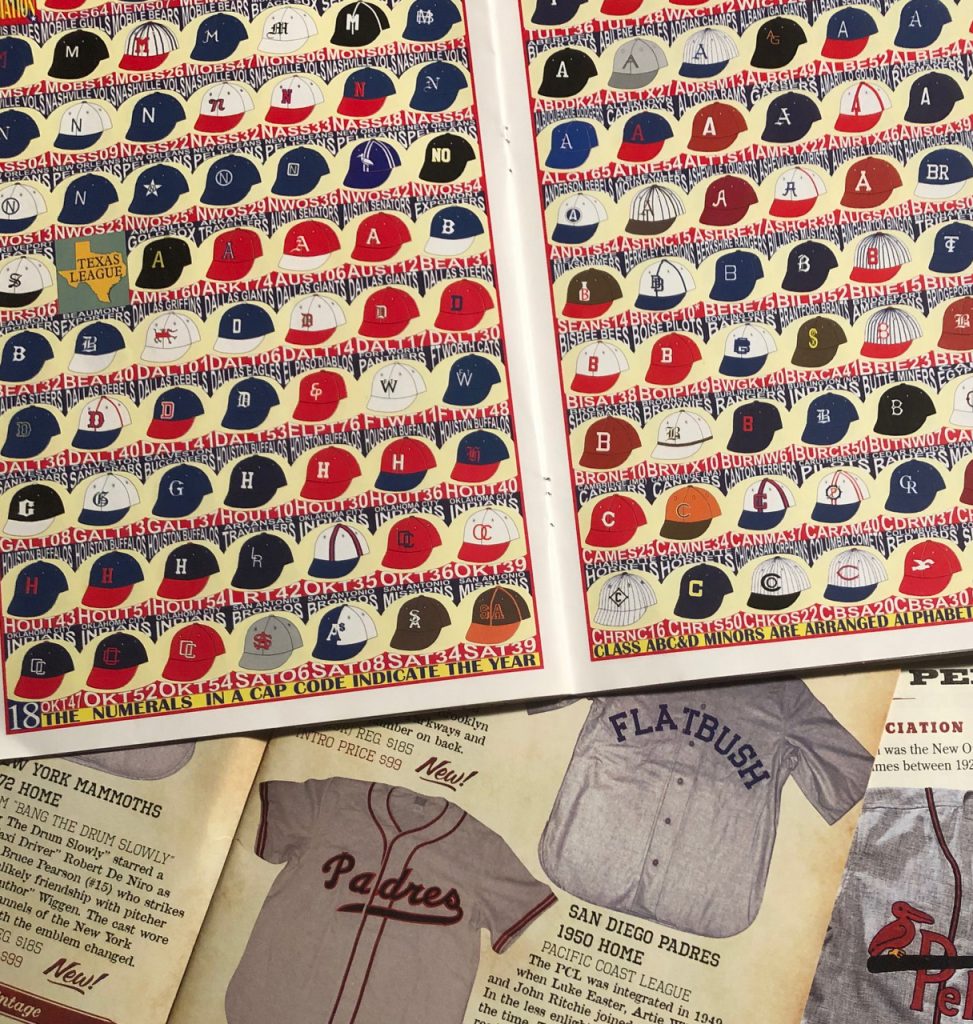 Sometimes you can catch a break by finding a random reference in a contemporary newspaper article, but most of the time an artist is on his or her own when it comes to color. That’s not to say there isn’t clues out there. It’s just a fact that most baseball teams either used navy, royal blue or red as their primary color. Those were just as popular back in 1910 as they are today. So, often it’s a safe bet to choose one of those three when in doubt – but that’s not the way I like to leave it.

Color detail is a topic I discuss often with my pal Graig Kreindler. Graig specializes in bringing the game’s golden years alive in full, vibrant color and is the most prominent baseball artist today. When one of us gets stuck on a color we’ll contact the other to see if we’ve come across it before. Because we’re both sticklers for details, sometimes we get lucky and one of us has the key in our files. When this doesn’t yield any results, it turns into a guessing game, albeit with a few cheats available if you know how to look. One way to guess a color is by the shade or tone it appears to be in a black and white photo. To my eye, royal blue looks slightly different than red. And navy blue will catch the light in a different manner than a black cap. I happen to be very color blind, so my lack of visualizing the spectrum of colors may help me see (or think I see) a difference in the tones of a black and white image. In older pre-1930s photographs, the color yellow often showed up very, very dark. I did a quick comparison chart of known cap colors from the early 1950s. Take a look and see if you can tell the slight differences. Of course, time of day, camera settings, type of film, interior/exterior and a million other factors will throw off this little theory. It isn’t an exact science, and it could be completely unfounded, but you’d be surprised how often an educated guess turned out to be correct. 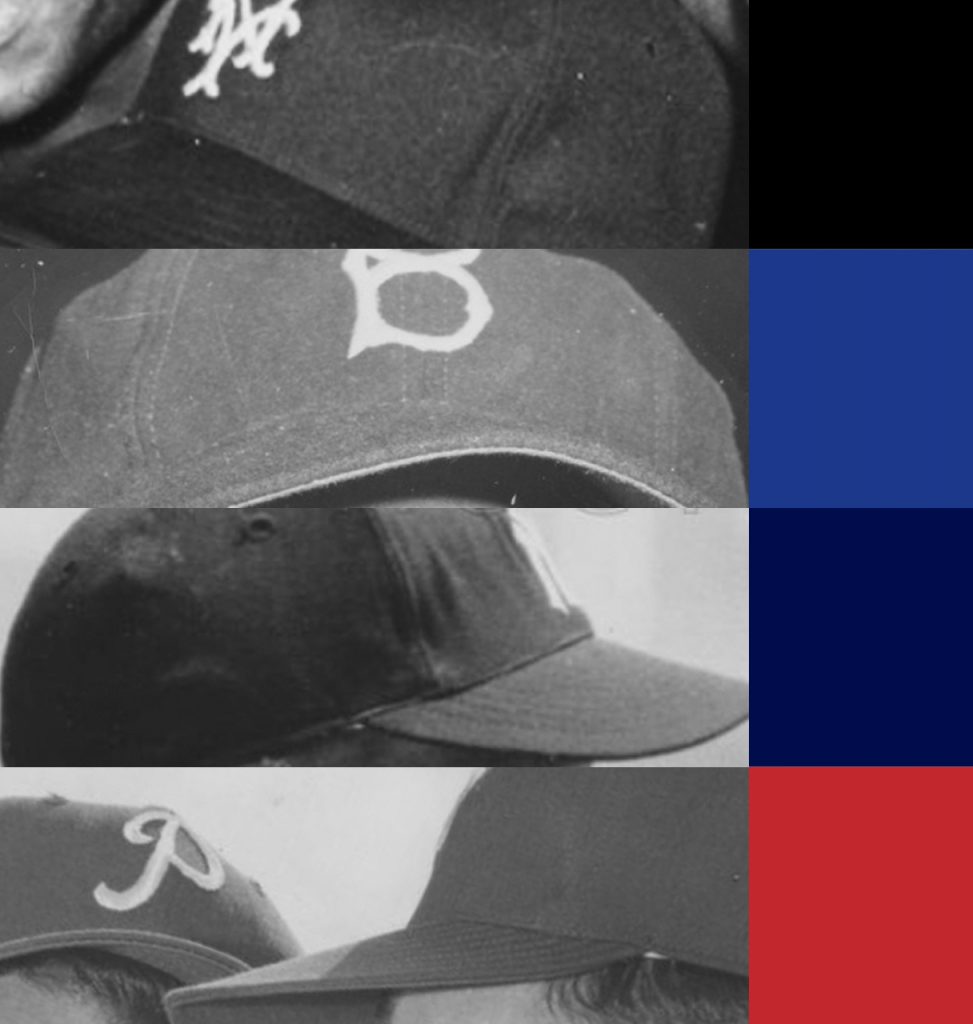 Taking all the information I have amassed to this point, I decided to show Jake in the home uniform of the 1927 Charlotte Hornets. Because of the team’s name “Hornets” and local papers calling them the “Bees,” I made the call that the colors will be black and golden yellow. I could totally be wrong, but that’s my guess based on all I had before me. That means a pinstriped jersey with golden yellow diamond and “C” on a black diamond; black piping on the collar, front and pants; and a black cap with golden yellow block letter “C.” It might not be right, but I feel comfortable with it, and it will look pretty cool.