Ninety-nine percent of the time I already have a good idea in my head of what I want the player’s pose to be. In Jake’s case, I liked the idea that he was both a pitcher and an outfielder. It’s not often a pitcher can hit above .300 like Jake did when he was with Charlotte, so I knew I wanted to depict him in a pose that somehow represented this duel talent of his. After looking at photographs of Jake, I noted his posture – real stiff. That’s not surprising, as most of the photos were for newspapers and not many people look relaxed when flash bulbs are going off. This is the time when all the written research adds to the visual interpretation.

Sometimes it is possible to get little crumbs that let you peek into what type of personality the subject had. With Jake, I found several small bits in contemporary newspapers that allowed me to imagine how Jake would have posed had it been a candid moment. Several writers noted that he was regarded as one of the most likeable players in the South Atlantic League. That makes sense as one of his jobs in the early 1920s was a millinery salesman. One didn’t become a successful salesman of women’s hats if he wasn’t an affable and outgoing person. Another snapshot into the personality of Jake Levy was found in a July 1927 story about him, just after he signed with the Giants. Jake was on the field before a game in Nashville when a bunch of fans started razzing the $10,000 phenom. Jake had his “mic drop” moment by telling the fans, “Next year instead of this across here” he said pointing to the “CHARLOTTE” across his blouse, “I’ll be wearing a big “G-I-A-N-T-S” across here.” As great an insight those little moments are, one more thing really gave me a better picture of the man, and it had nothing to do with baseball.

Besides being a pitcher and outfielder, Jake Levy was a violin virtuoso. You read that correctly. Irish Jack was a professional violinist. I gleaned this little gem from a several articles about Jake after the Giants picked him up. In fact, one story has John McGraw telling him to bring the instrument with him when he reported to the Giants in September. A story in the Sporting News in the spring of 1928 relates the friendship between the Giants catcher Shanty Hogan and the rookie pitcher, their bond formed through Jake’s violin playing and Hogan’s vocals. A little more digging and it turns out that Jake’s off-season job was playing the violin in his own dance band, “Jack LeRoy and his Orchestra!

Stringing all those bits and pieces together I imagined how Jack/Jake would have appeared if you came upon him before a game in 1927. He’s 27 years old, the league’s best pitcher who was also hitting above .300. The mighty New York Giants just shelled out ten grand for his services and he was the leader of his own dance band. Sounds like a guy who had the world by the short hairs. That’s the Jake Levy I wanted to depict.

First thing that came to mind was to have him holding both a ball and a bat to represent his double threat. In my head I saw him as leaning on the bat, shoulders slightly pushed back, comfortable and confident in his own skin. I sketched it out in pencil. 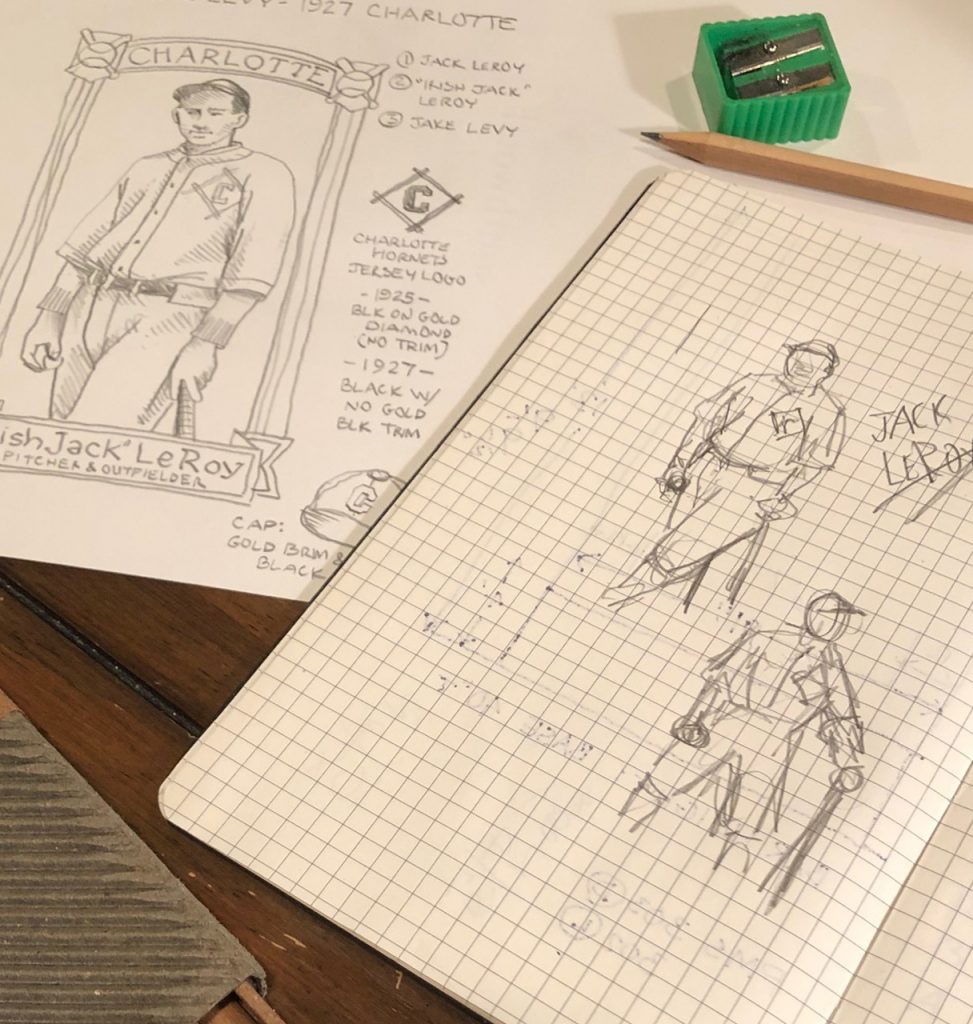 With the idea down, the next step is to refine the drawing. There’s a few ways this part can go down. I first is if it’s a close up portrait, like the illustration I did of Carl DeRose, it’s a straight forward facial study with just a little bit of the body showing. Those are usually the fastest to finish. If I decide to do an action pose, such as the illustration of Bruce Petway, then there’s a little more work involved. If I can, I will try to find a few photographs that gets close to the pose I have in mind and work up my drawing from those. If I can’t find any existing photos to use as a model, I have to enlist my friends or neighbors to pose for me. This is what I had to do for Jake’s illustration.

I stopped by a friend’s house, and for the price of a sixer of Miller High Life, got several good photos of him in the pose I envisioned for Jake’s illustration. Later, I had another friend hold a baseball and bat in a few different poses to get the hands the way I wanted. Soon I had my final sketch. 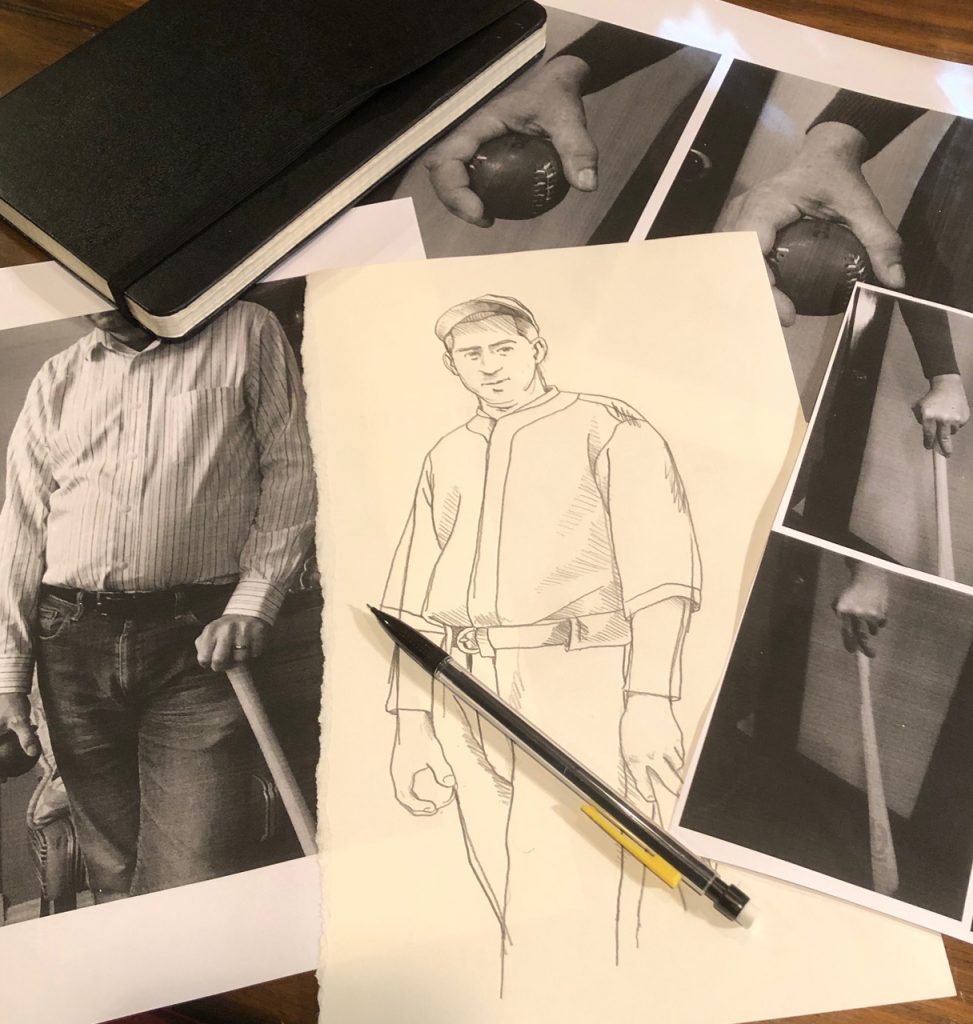 One thought on “My Process Part 6: Let the drawing begin!”