Because I’ve been doing my baseball card illustrations for over ten years, I have developed a system of sorts.
Back in 2010 when I started, I had to not only do the player drawing themselves, but also come up with the whole design of the “card.” There’s many artists out there who repurpose the classic look of particular vintage baseball cards like the 1933 Goudey, 1909 T-206 tobacco cards or the 1952 Topps. While I can’t deny that those all have iconic looks to them, when I started The Infinite Baseball Card Set, my whole idea behind it was that I wanted it to be the baseball card set I always wanted to find as a kid, not just an extension of another set I was already familiar with.
So, with this in mind, I developed the design you see today. The green framework harkens back to my days when I was a designer on Oriole Park at Camden Yards. I always had a soft spot for the dark green color Orioles VP Janet Marie Smith picked for the color of the structure and seats in the ballpark; it always said “baseball” to me, so I just had to use it for the framework of my cards. The simple name of the city or ball club found in the arch on top of each card was my way of getting away from slapping a team logo on the front. For every great looking Dodgers, Yankees and Cubs type of logo, there are a million bad ones that I did not want to appear anywhere near my art. The player’s name was placed conventionally at the bottom, easy to read and with his or her position below.

The size I chose was deliberately different from the standard 2 1/2″ x 3 1/2″ format that has been trading card standard since 1957. While run of the mill collectors might not like this non-conformist size, I wanted my cards to stand out from the rest – because I did them.
On my computer I have a saved template that has the card frame design as well as the back design (I’ll tell you about the backs in a later installment). Along with the card frame, I have other odds and ends that will come in handy, such as color palettes. I am very color blind and if it ain’t a primary color, it looks brown or grey to me. The saved palette I use consist of the colors I use for skin tones, flannel uniform shades, leather hues and popular team colors such as navy blues and reds. Besides helping me make avoid a mistake due to my colorblindness, the palette brings some color consistency to my illustrations. 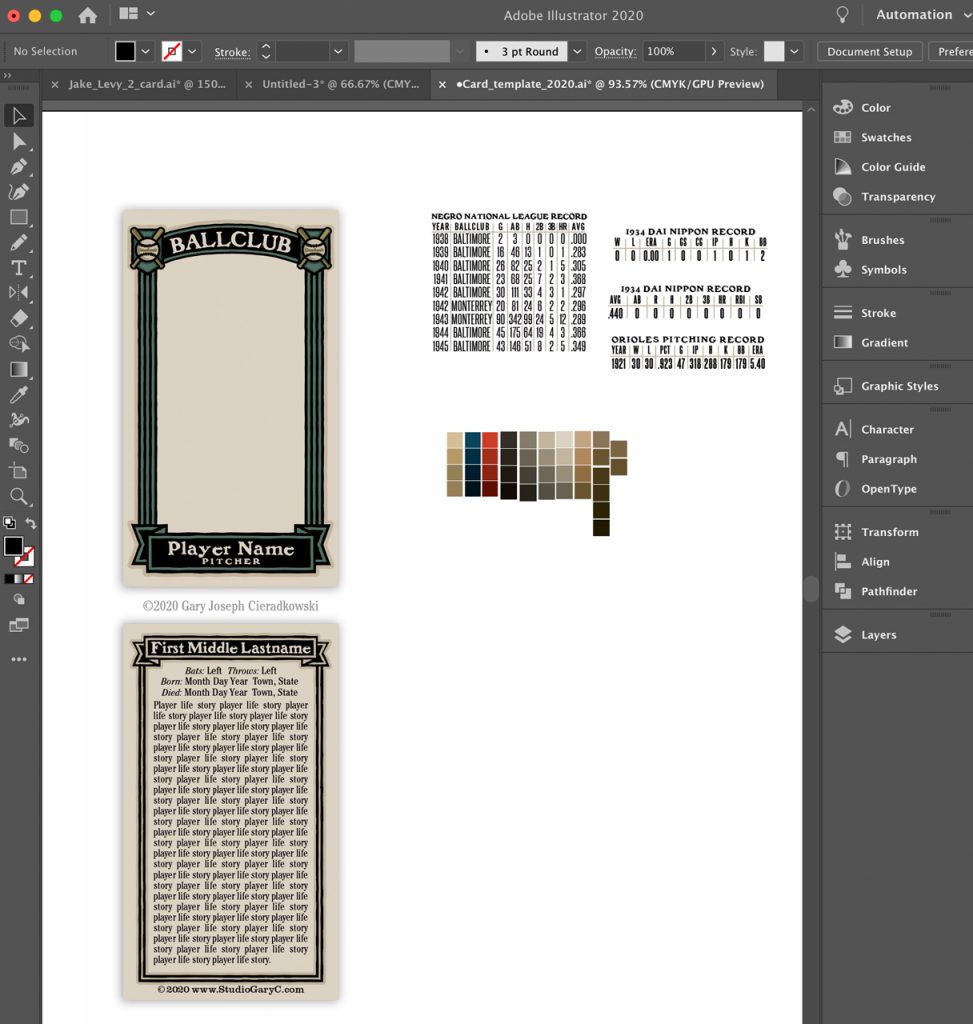 Also found on the template file is the typefaces I use for the team and player titles. Most of the time, adding the player’s name and ball club is the first thing I do when I begin the computer stage of my illustration. Although it might look easy, adding these are not as simple as typing them in. There is a lot of manipulation done to the size and letter spacing in order to get them to fit just right. I also frequently customize a letter or two to satisfy my typographic perfectionism. To most people’s eye, there wouldn’t be much of a difference, but to someone trained in classical typography, sloppy kerning or an awkward serif looks as wrong as a misspelling.
Now I add the scans of my ink drawings to the template. The cross hairs that you saw in the previous step allow me to line every layer up correctly (in Jake’s case 3: the player outline, pinstripes and uniform details). Once adjusted, I assemble the layers and size them to fit the proportions of the prepared card frame. When there is pinstripes, as in Jake’s case, I make them about 20-30% transparent to mimic the look of actual pinstripes. 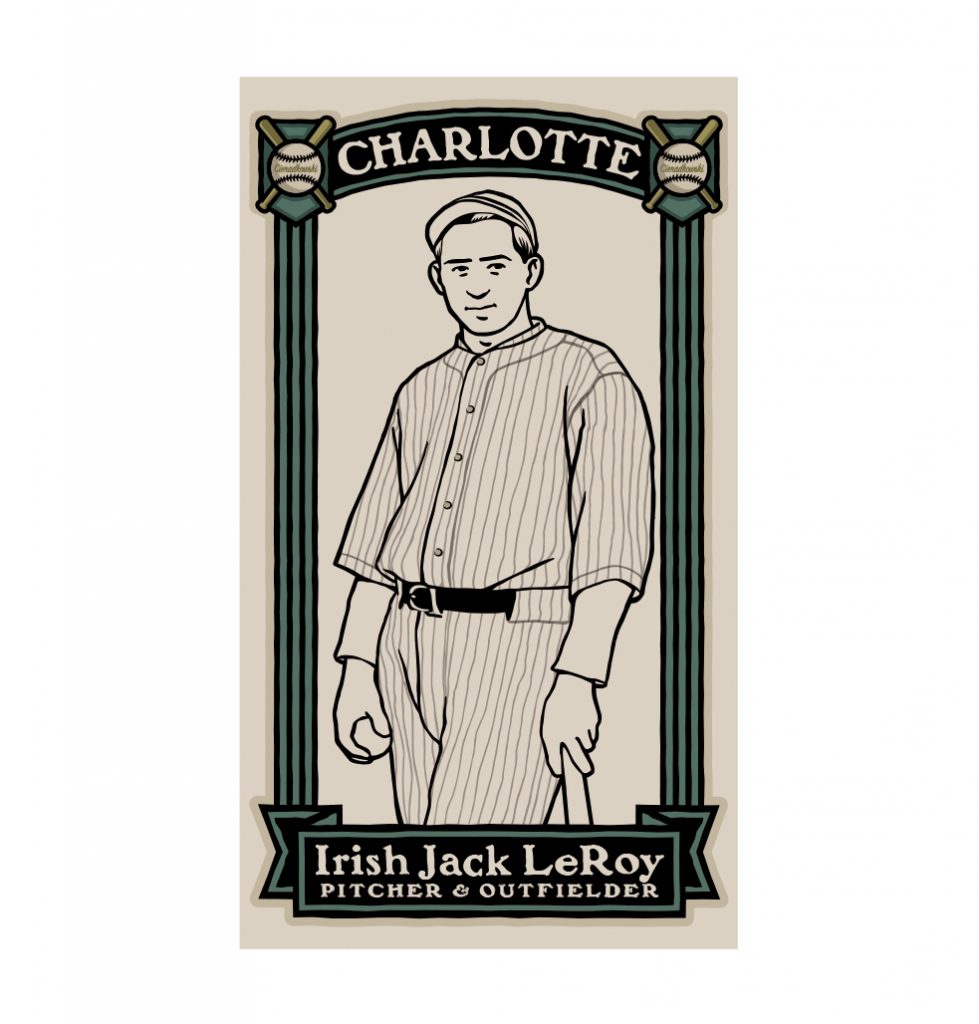 The next step is to add colors. First I make the background a neutral color. There’s no reason for this other than I think it looks nicer while I’m working. For the figure, I start with the large blocks, such as the off-white of the uniform, colored undershirts and cap, face and hands and ball, bat and glove. 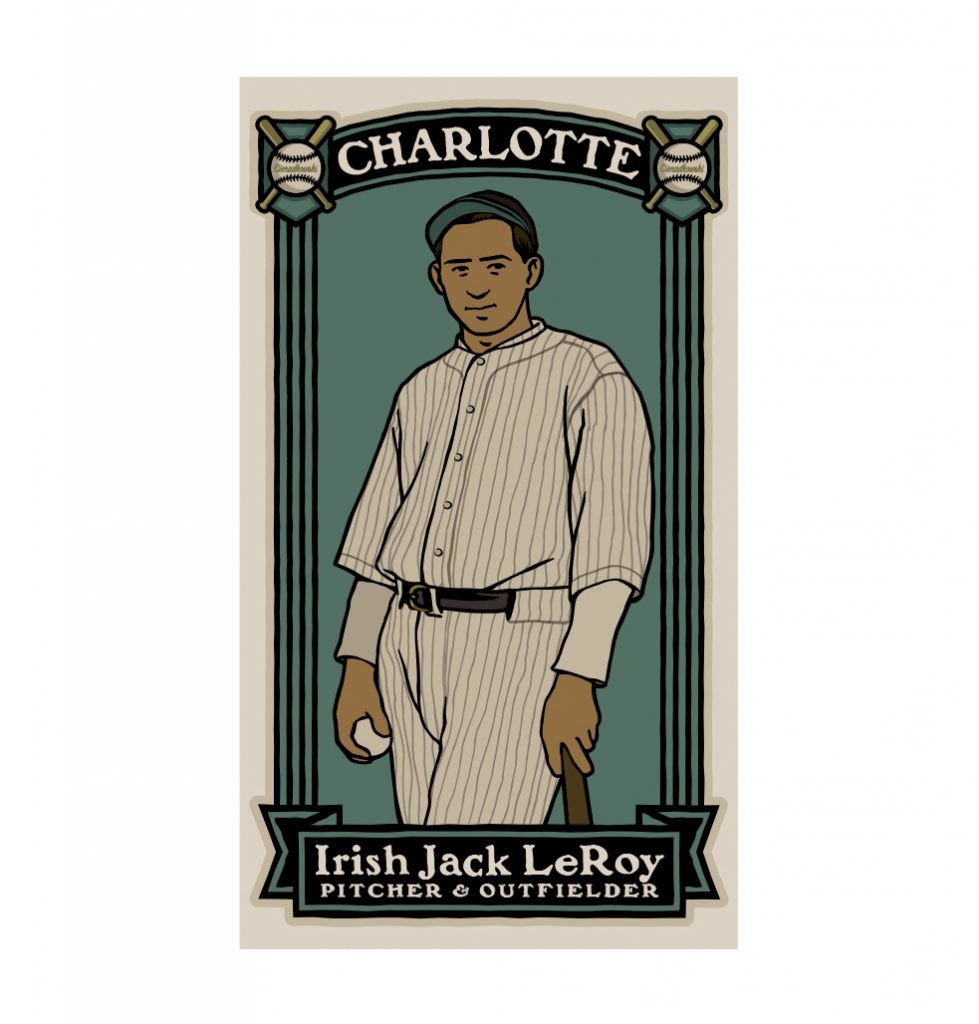 With these large areas blocked off, I begin adding the details such as folds in the uniform and the colors of the cap. 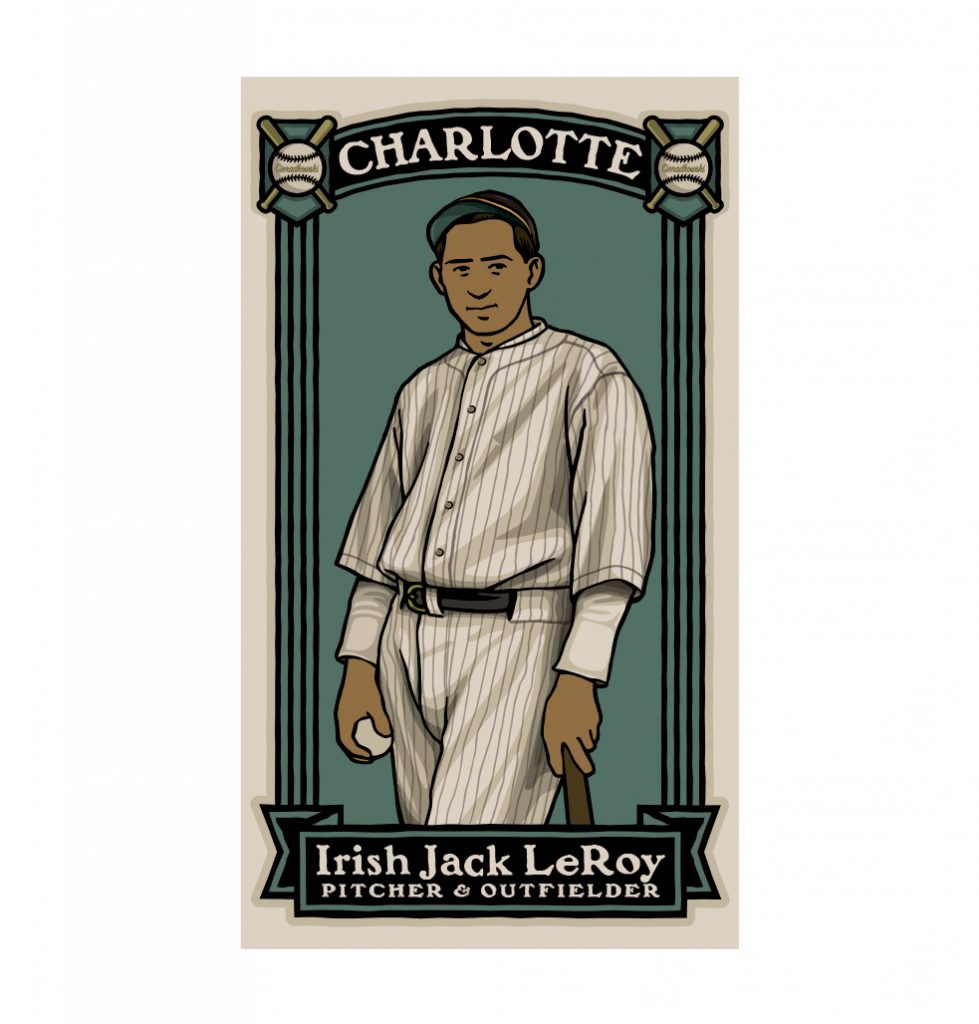 Usually the next to last step is the facial and hand features. This is where the original pencil drawing is most important. Because the basic features of the face are rendered in just a few ink lines for the nose, mouth and eyes, I had to give them as much character as I could. If I did that correctly, adding tones of color will immediately bring the subject’s face to life. If I didn’t get the drawing or ink step right, it won’t look like the person I am trying to portray, no matter how much color I add. Same with the hands. Every artist has his or her nemesis; hands are mine. Can’t tell you how many hours I spent in my life practicing hands and fingers. Still do. Again, if my pencil drawing didn’t get those right, the black outline is useless and I have to start over again. Fortunately with Jake, the hand studies I did from the impromptu modeling session paid off and it all went pretty quick. 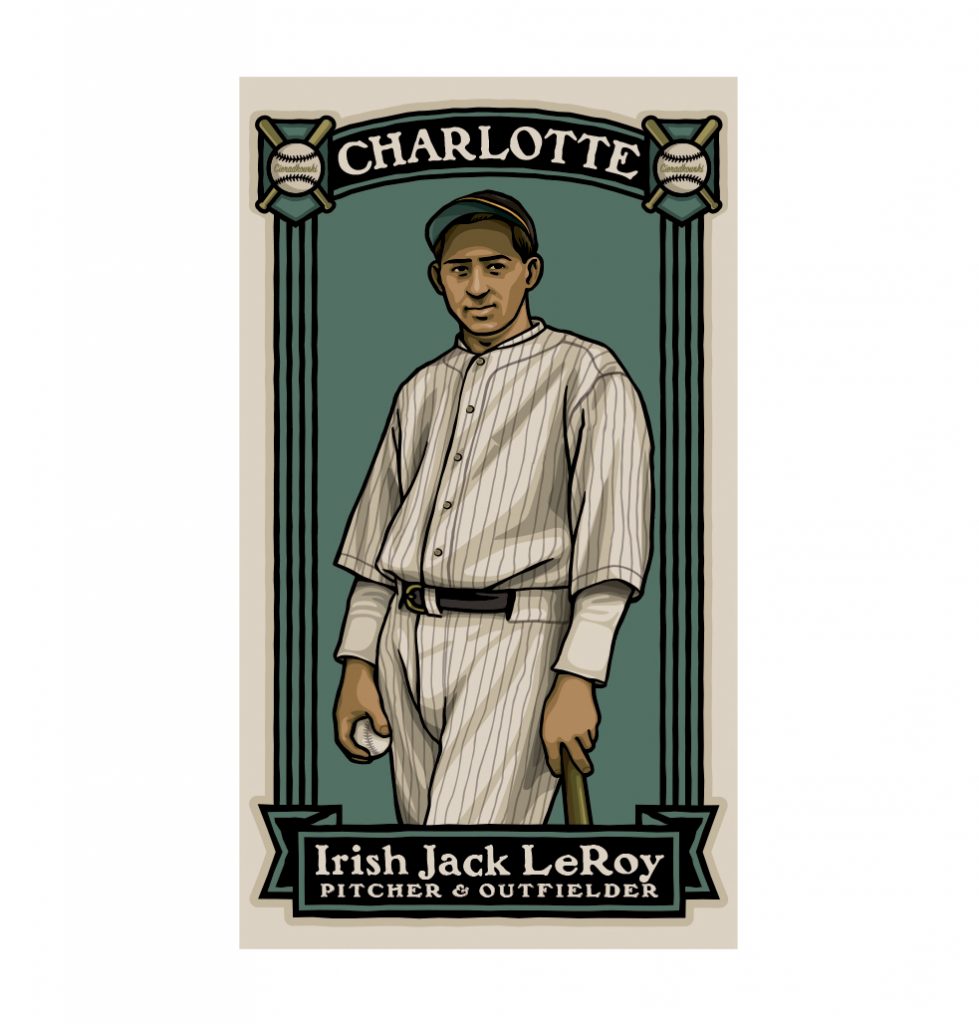 The final stage is to add the uniform logos and details. In this drawing the process was pretty simple because I had already drawn the chest logo and cap letter on one of the three layers of ink drawings that I had scanned in to start with. The piping on the jersey and pants were also already drawn and inked up so all I had to do was add color where needed. 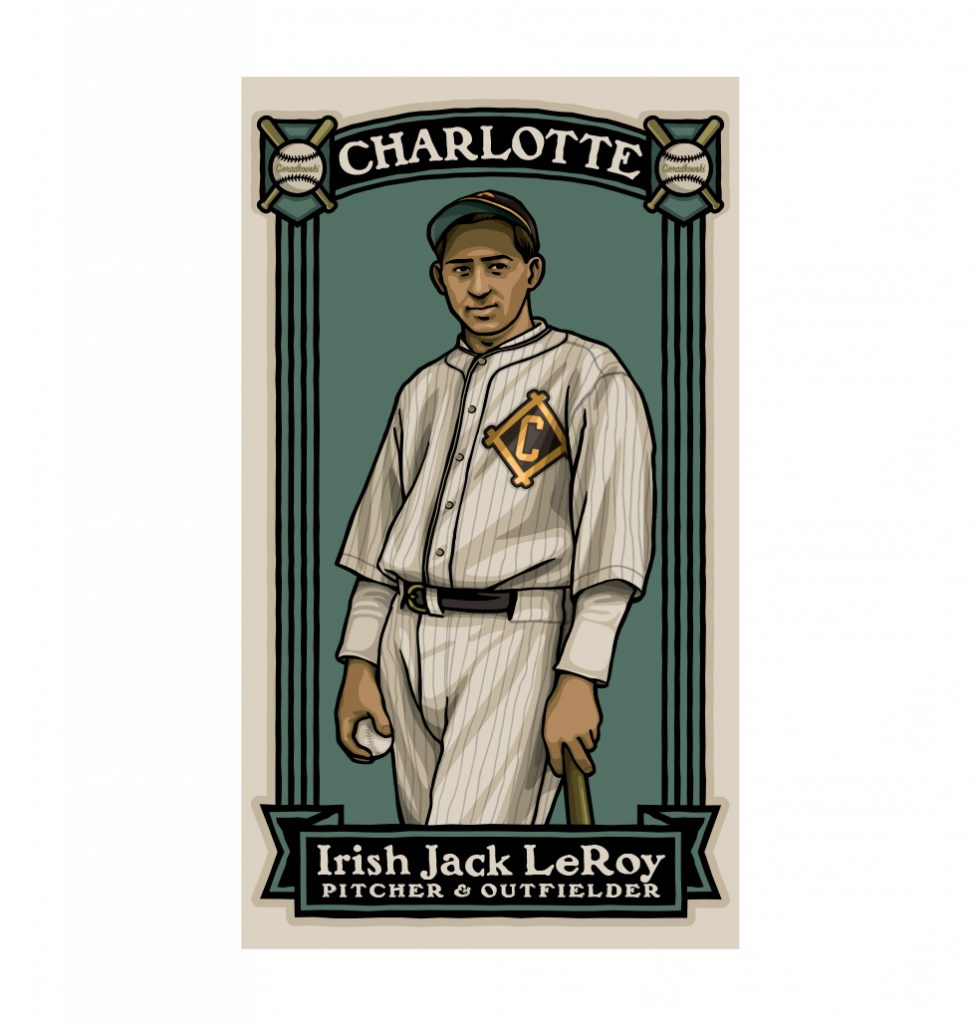 After taking a break to have a cup of coffee and read the papers, I go back to the color drawing of Jake and tweak anything I think is off. When that’s done, I begin work on the background.
Tomorrow: Where in the world is Jake Levy?