Over the years, many people have remarked about the backgrounds I have in my illustrations. I’m happy people notice them because I go out of my way to make sure they compliment the players. I want them to appear comfortable in the world they inhabit. Sometimes you can see a panoramic view of the ballpark behind the player, other times it’s a close up in the dugout. My favorite is to show bits of the outfield advertising that once was a staple in every ballpark. I have always been a student of the history of graphic design, and I love the raw creativity and custom typography some of those old ads had.

Most of the time I don’t have a set idea of what I want in the background of an illustration until the figure is underway. Usually when I’m working on the color I’ll start getting an idea in my head, and by the time the figure is complete, I know what I want to do. In Jake’s case, I really wasn’t absolutely sure on a direction. My first inclination was to put him in front of a cool looking outfield billboard. The old “Hit Sign–Win Suit” ads always intrigued me. Back in the day, ballparks at every level seemed to have one of those signs sponsored by the local men’s shop or tailor. It’s as synonymous with a ballpark as hot dogs, and for some reason, after illustrating hundreds of ballplayers, it is something I haven’t done yet.

For the ad, I drew a circle and hand lettered the “Hit Sign Win A Suit,” added a few bats leaning against the wall, then scanned it into the computer. Using the same drill as I did for the figure, I turned it into vector art and added color. To give it depth, I placed a shadow behind Jake. 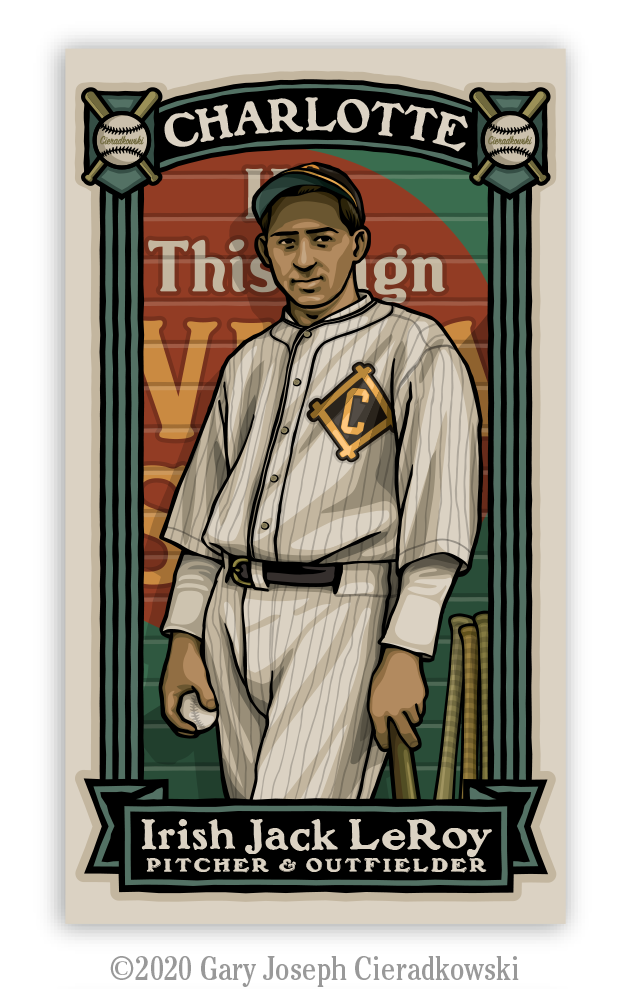 After living with the drawing for a bit, I decided that maybe it wasn’t what I wanted. I thought that maybe there needed to be some grass and sky around the figure. I added an outfield wall, some trees and grass. A base path gave the landscape some depth. Now, from the few photos I was able to find of Charlotte’s ballpark in the 1920’s, it looked like the outfield wall was a ramshackle barrier of wood planks. When possible, I try to be as true as possible to the actual ball park the player played in. You can see this in such illustrations as my interpretation of the Polo Grounds in Ralph Branca’s illustration. However, when there is little to work with or the reality is kind of boring, artistic license comes in. For Jake, I liked the perspective of the outfield wall and trees, but a run-down wood fence would be too anti-climactic. I decided to fill it will old advertising.

Sometimes when I do ads in the background I used real period products, like the Bull Durham billboard behind Walt Malmquist or the Bull Dog Twist ad painted on the factory wall in the Smoke Justis mural. Other times I amuse myself by making up the product and naming them after my friends and family. Chances are, if you’re a friend of mine, you name appeared in one of my illustration, even if you haven’t found it yet. That’s part of the fun, letting someone stumble upon their name by accident. A fun example of this is my the illustration of Steve Dalkowski in my book, The League of Outsider Baseball. See the car tire Dalko is throwing the ball through? Well the words around the edge of the tire are actually my wife’s three nieces and nephew, Charlotte, Jackson and Remi. And on the billboards behind Steve Dalkowski you can find Scott and Cathy, my brother and sister-in-law.

For the ads in Jack’s illustration, you can just make out “Sophia,” “Mike” and “Caden” – the names of my brother-in-law and his two kids. 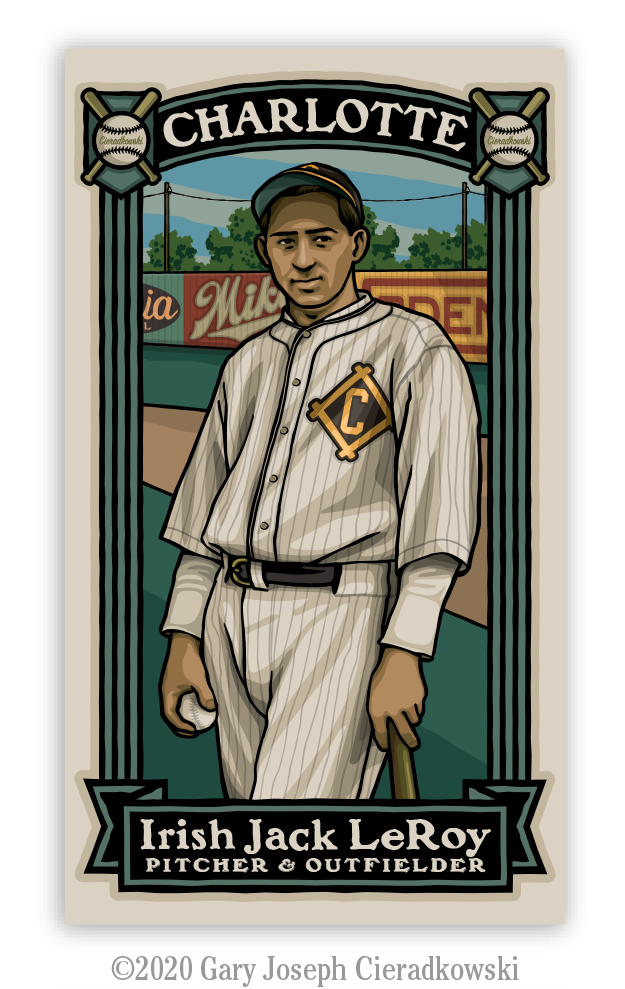 The problem now is that I had two versions of Jake Levy which I though both had merits. When this happens, I’ll text or email a couple of people whom I think have a good eye. Sometimes it’s my wife, other times it’ll will be an old designer buddy or longtime friend. In this case, I enlisted my wife and my pal Christian, the librarian who often helps me out with hard to find research material. My wife will always choose the version she prefers with no explanation, just “the one on the top” or “the one with the blue.” Today, she texted “the one on the left,” which meant she liked the “Hit Sign-Win Suit” version. Christian on the other hand will include a little narrative why he chose the one he did: “The first one. More of my focus stayed on LeRoy whereas the second one, I was looking around at the the background more. Plus, I like the pile of bats in the first one.” was his reasoning today.


If you don’t have your scorecard in front of you, the score was 2-0 for the “Hit Sign–Win Suit” version. At first this surprised me because I thought the landscape version would win out. On the other hand, I usually find that my first idea is the most successful one. It’s not because I’m some kind of artistic genius, but because the background is something I have given a lot of thought to while colorizing the player. I try to imagine the type of world my subject would inhabit and how he would fit into it. That’s why I say my first idea is usually the best; it’s more thought out. I should just listen to myself and save time, but sometimes it’s good to get a second or third opinion so I’m sure. Besides, developing the second background wasn’t a waste of time because I’ll save it for possible use in another illustration down the line.

3 thoughts on “My Process Part 9: Where in the world is Jake Levy”