Probably the most difficult part of doing my stories and illustration is the write-up that goes on the back of the card.

Despite what you might think, it’s really hard to tell a story in 185 words. I believe the thing that makes what I do different than anyone else is that I write the story as well as illustrate the player. While the drawing gets you in the seat, it’s the story on the back of the card that drives the engine that gets you there. But what do you do when you have collected over a hundred pages of newspaper articles, statistics and notes? How do you condense it all down to 185 measly words? And why the heck does it have to be 185 words? 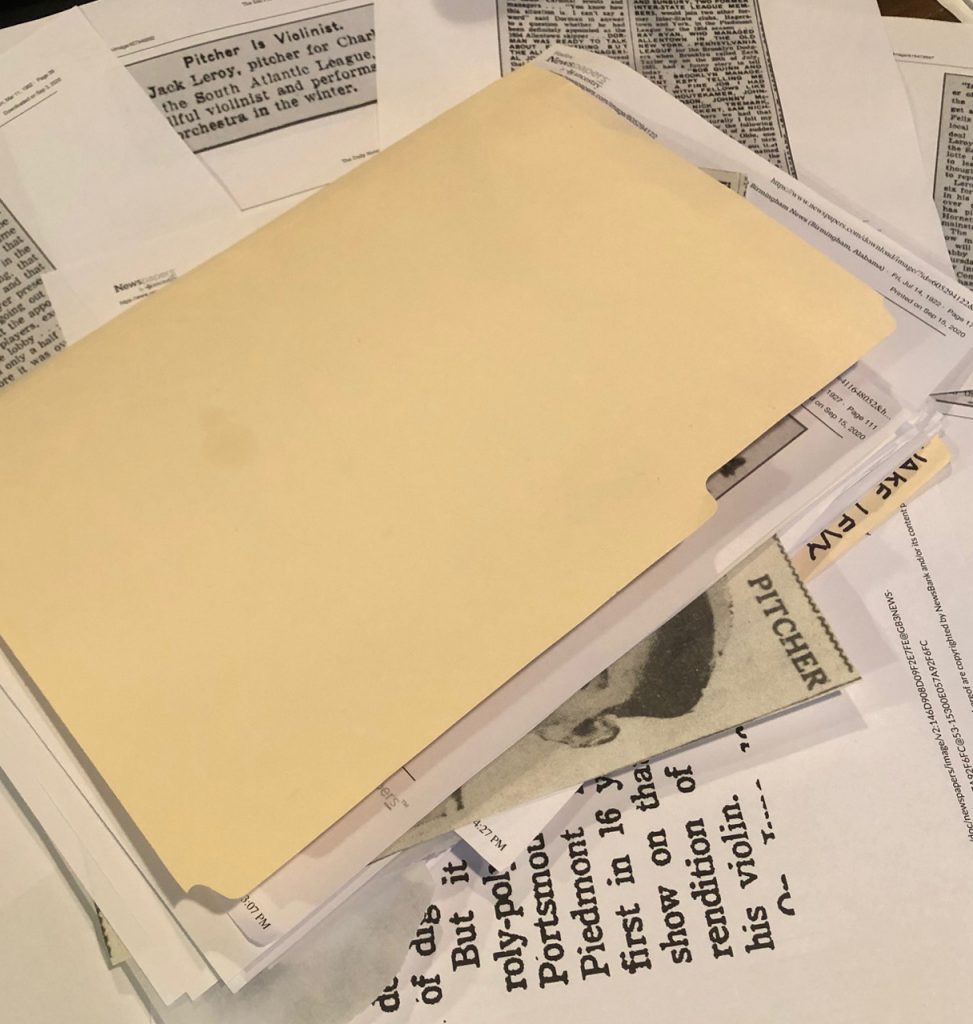 When I first started doing my cards and stories, I developed a back design at the same time I did the front. I knew the essentials I needed: the full name of the player, date and place of birth and death and whether he or she was a lefty or a righty. That out of the way, I dedicated the rest of the back to the story.

Picking the right typeface for the card was a tough job. Since space was cramped, I wanted to be able to pack as many words as possible into it. The key was not to make it too small. I felt that 7 to 7.25 point size was the smallest it could be while still being readable. To gain a little more space, I decided to look at condensed typefaces. I normally wouldn’t use a condensed typeface for the text in a design, but since this was less than 200 words I figured I could get away with it. The next step was finding a condensed typeface that was not only readable, but complimented the aesthetics I established in the design.

Serif typefaces are usually easier to read so I began with those. A “serif” is the little extending stroke or line at the ends of a letter. I believe these came about when Roman stone cutters were carving Latin letters into marble. These little strokes capped off a letter, cleaning up the ends of the lines as they were chiselled into the marble. On the other hand, a “sans-serif” typeface does not have these extending strokes. The sans-serif most people are familiar with would be Helvetica. Because it is as non-emotional as you can get, it is the go-to typeface for everything from fire alarm instructions to street signs. I like sans-serifs for headlines and titles, but used too much, as in the text of an article, and it gets hard to read. Serif typefaces are usually easier to read due to the serif itself; it helps guide your eye from one letter to the next, a very helpful thing to have working for you when there is a lot of text. 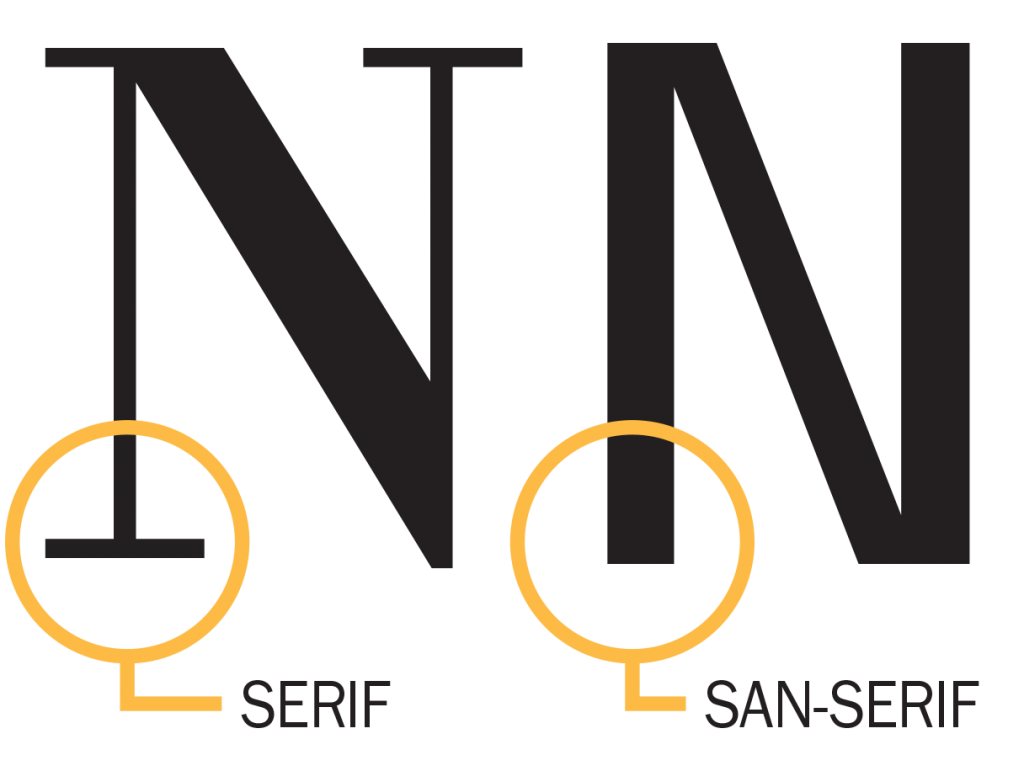 There are thousands of serif typefaces, all having their own character. With the small size needed, I knew I had to keep it simple. I found that the turn of the century typeface Cheltenham checked all the boxes; it came in a well balanced condensed version that did not look forced, the thick and thins were designed in such a way that it lends itself well to small sizes and its look fit the whole classic design I was going for. It also comes with an italic and bold version, good to have just in case it is needed for some variety.

Believe me, I know that this is probably way more than you signed on for, but I mean it when I say that the typeface a designer chooses is very important. Your subconscious responds differently to various styles of typefaces when comprehending a message. Use a sans-serif like Helvetica and you’ll read that as sterile and plainly informative. Try a fancy serif like Bodoni and you run the risk of spending more time trying to comprehend the dramatic thick which may cause the reader to overlook the message. A workman-like serif typeface like Cheltenham, while not beautiful in any way, is pleasing to the subconscious eye. This is due to there being not much of a difference in weight to it; there are thick and thin parts to each letterform, but they are not too dramatic. The serifs smoothly lead the eye from one letter to the next, allowing the mind to easily understand the message. In such a small confined space, I couldn’t think of a better typeface than Cheltenham.

Here’s a quick visual to show the differences between Helvetica, Bodoni and Cheltenham. 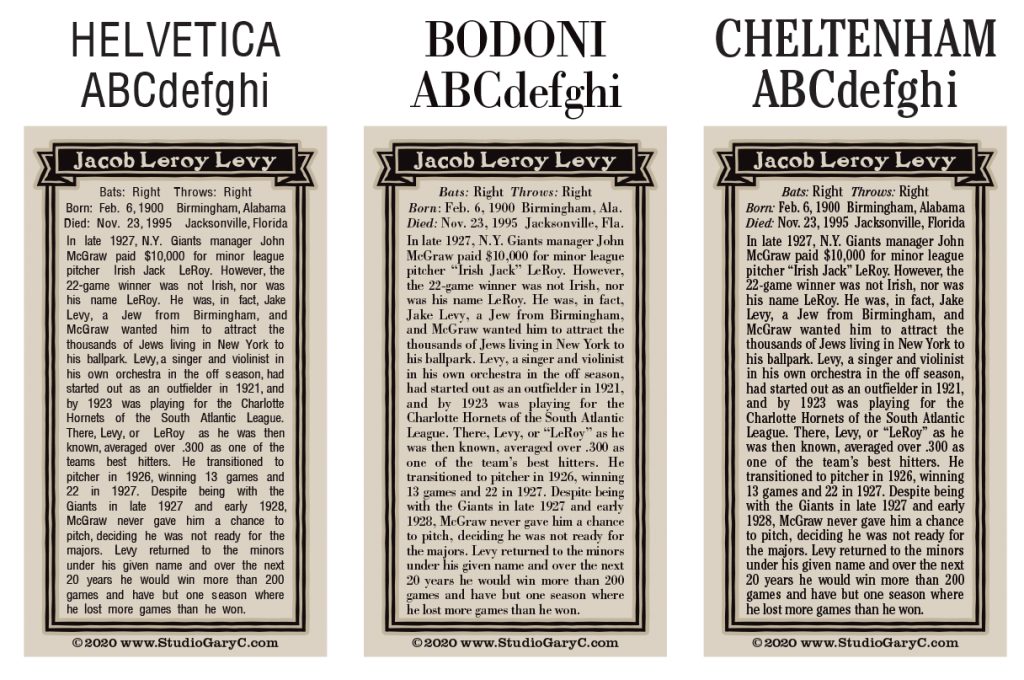 Alright, alright. Typography class is adjourned. Let’s get back to Jake.

As I said in the beginning, it’s really hard to tell a story in 185 words. Generally, I amass hundreds of pages of articles and notes for each of my stories. While all that research is great when sitting down to write the long-form story, it sometimes becomes overwhelming when I have to distill it all down to 185 words on the back of the card.

When I begin to write the back of the card, I try to come up with a good hook to start it off. Something like “Jake Levy was born in 1901” may be informative, but it’s like having toast with no butter. Because the players I write and draw are so often of the forgotten variety, the reader might not be familiar with him or her. Starting off the story of why this player mattered in such a stale manner runs the risk of making the reader not care. So, that’s why I try to search for a dramatic or intriguing first sentence or two to hook the reader. Sometimes it will be the odd fact or bit of trivia that makes the player is significant; for instance, the back of Eddie Mathews’ card starts out:

“Besides being a Hall of Famer and member of the 500 Home Run Club, Eddie Mathews’ career is one for the trivia books.“

It ain’t Tolstoy, but it’ll spark interest and make one ask, “well, why was his career one for the trivia books?”

In Jake’s case, the first two sentences practically wrote itself, since it is the reason that drew me to his story in the first place:

While again, it ain’t Tolstoy, but will you give me Dashiell Hammett?

With the hook set up, the rest of the story flows off of it. First step is to answer the question posed by the first two sentences, then give a run down of the player’s career. When doing this, I try to include any notable stats. I have to pick and choose wisely because add too many and it becomes like a Baseball-Reference page, too little and the reader might not understand the significance of the player. Sometimes, if a player had one or two outstanding seasons, I will add a stat line to the bottom of the card. Jake’s does not have this, but you can see how I use it on Jesse Baker’s card.

Because I get excited when telling the tale of the players I cover, my first run at the text for  the back of the card tends to be overly verbose. It’s disheartening to see that what I thought was a bare-bones telling of the player’s story was actually 310 words. Now the hard part begins, cutting and re-writing the text to fit within the 185 work limit. It’s tough to have to cut what I think are interesting parts and facts, but by the time I’m through, I do end up with a text that works either as a stand-alone biography of the player or as a teaser to read the long-form story. Here’s what I came up with for Jake: 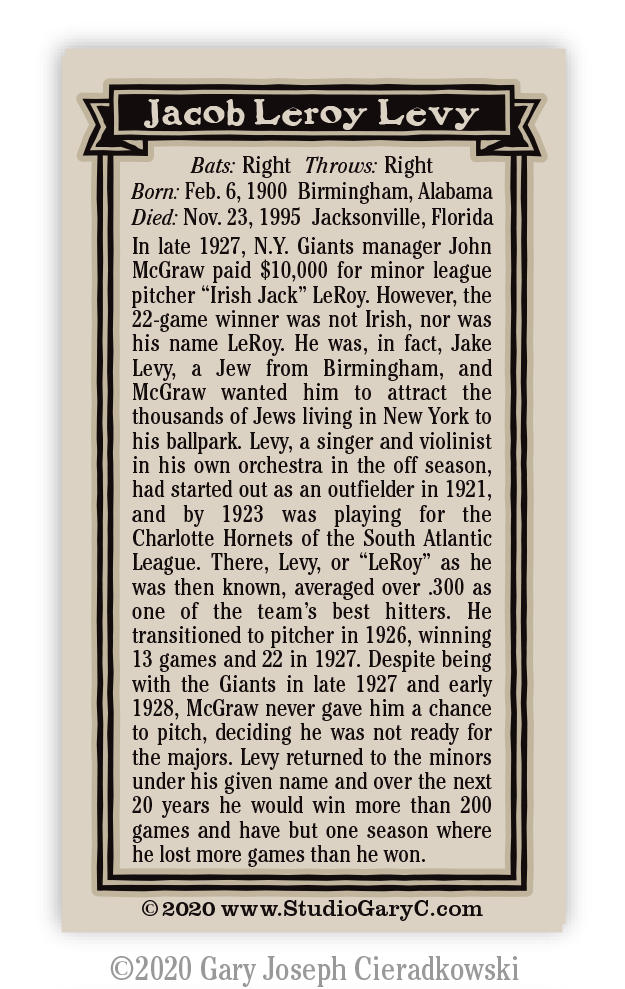 Writing and editing the 185 word limit story is arduous, but what it does do is give me the outline and structure I will use when writing the long-form story.

Monday: Read all about it!