NOTE: I will be resuming the “MY PROCESS” series in a week or so. I needed to take some time to go through all the research and develop an outline of the final story of Irish Jack LeRoy/Jake Levy. When the series resumes, you will be able to see how I finish the story as well as how I make the booklets. Until then, please enjoy this story about one of the more interesting ballplayers I’ve come across…

When no suitable offers came in, Eddie went the rogue route, signing with the Louisville team in the new and outlaw Columbia League. This league, saddled with the “outlaw” descriptor because it was not affiliated with the National Commission which oversaw the minor leagues, rejected organized baseball’s reserve clause and allowed its players freedom to choose who they signed with. The Columbia League folded before a game was played and Eddie began trying out for a couple of teams in the United States League. The USL was founded with the same ideas as the Columbia League, but unlike the other outlaw loop, managed to get off the ground. Sabrie spent spring training with Reading but wound up with the Pittsburgh franchise, called the “Filipinos” after their manager, former Pirates ace Deacon Phillippe. Despite its lofty ambitions, the league lasted only 26 games, with the Filipinos finishing in first place, 19-7.
NOW 31 and a veteran of ten bush league seasons, Eddie was running out of options. Over the winter he was mentioned as a possible manager of the re-formed Charleston Sea Gulls, but in the end he chose to stick with the outlaws and signed on again with the Pittsburgh club. The United States League had merged with the backers of the Columbia League to form the Federal League which Pittsburgh then transferred to. The Filipinos were unable to replicate the magic of the year before and finished at the bottom of the 6-team league. Sabrie hit .281 and swiped 19 bases in 115 games.
Sabrie did not sign with the Filipinos in 1914, instead returning to Charlestown where he had maintained his residence since 1911. Resuming his old spot as the Gulls first baseman, Sabrie turned in another good year which he closed out in style by performing a dramatic game-winning steal of home that beat Savannah on the last day of the season. The next year he took over as the Gulls’ manager, where he hit .264 and skippered Charleston to a second place finish. He spent 1916’s spring training with the team but was released after five days.
He apparently spent the rest of the season outside the game but resurfaced the next year in the Texas League where he took over the first base post for the Galveston Pirates. In an exhibition against the Chicago White Sox, Eddie went 1 for 4 against Eddie Cicotte and reportedly almost “killed a good third baseman with his crack in (Buck) Weaver’s vicinity in the ninth.”
Sabrie lasted 10 games and was batting .235 when Galveston released him. At the age of 35 and the Dr. Sullivan’s Sure Solvent failing to keep his malaria and rheumatism in check, Eddie Sabrie retired from the game.
WITH ONE CAREER at an end and WWI raging in Europe, Eddie enlisted in the army. He got in a little baseball as manager of the Camp Gordon team before he was shipped to France in May 1918. Eddie served with the 327th Ambulance Company, 307 Sanitary Train of the 82nd Division and returned almost exactly a year after he left. He umpired in the South Atlantic League until 1924 when he switched to the Piedmont League. By 1926, a lifetime of baseball had taken its toll on his legs and he had to give up professional umpiring. Fortunately, Eddie had invested his baseball earnings wisely, and he lived off this nest egg for the rest of his life. A life-long bachelor, Sabrie remained a popular character around Charleston where he occasionally umpired an amateur ballgame and pined for the old Dead Ball days. Hobbled by arthritis, Sabrie spent his last years at a veteran’s home in Mountain Home, Tennessee. Eddie Sabrie, baseball wanderer, passed away at the age of 76 on July 10, 1956.

This week’s story is Number 27 in a series of collectible booklets. 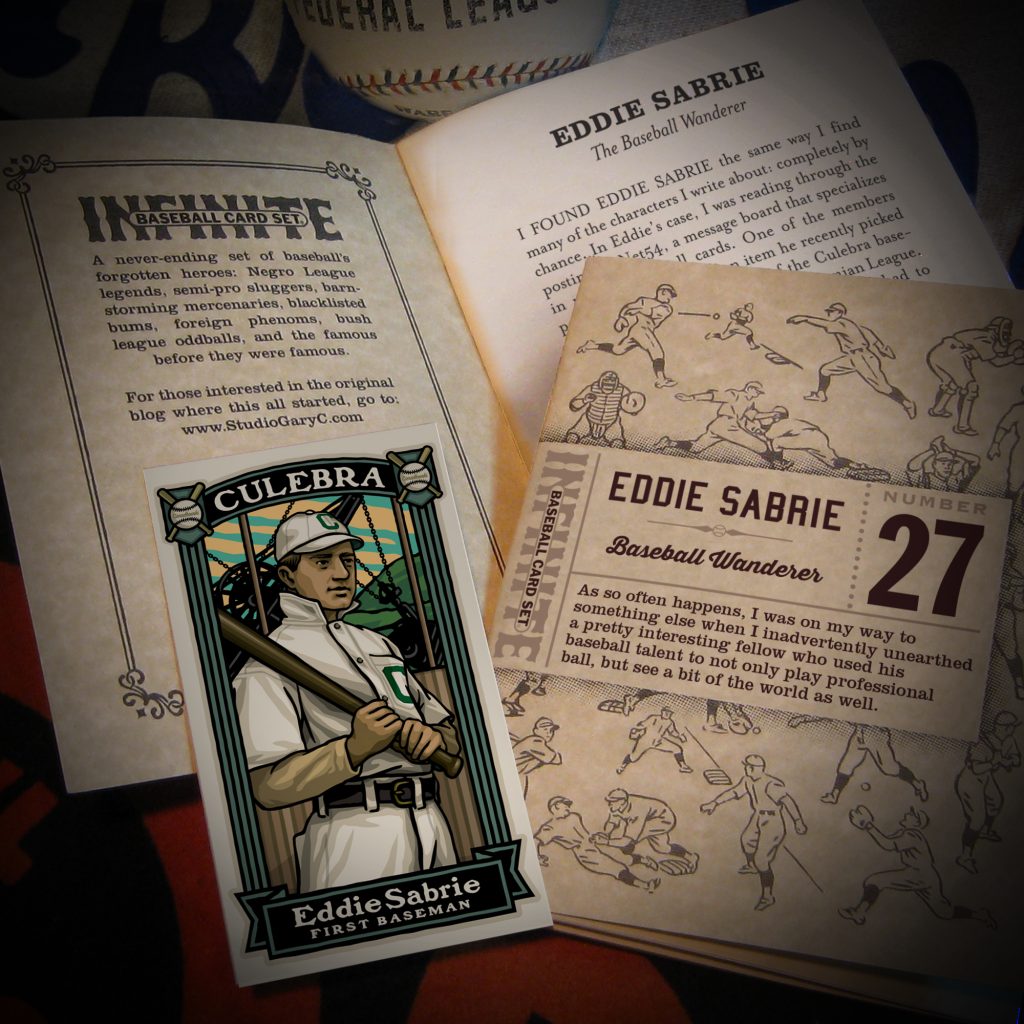 Each of the hand-numbered and signed 4 ¼” x 5 1/2″ booklets feature an 8 to 24 page story along with a colored art card attached to the inside back cover. These mini-books can be bought individually, thematically or collected as a never-ending set. In addition to the individual booklets, I envision there being themed sets, such as the series I did on Minor League Home Run Champions. You can order a Subscription to Season 2 as well. A year subscription includes a guaranteed regular 12 issues at a discounted price, plus at least one extra Subscriber Special Issue. Each subscription will begin with Booklet Number 018 and will be active through October of 2020. Booklets 1-17 can be purchased as a group, too.