This year has been a very interesting one for me as far as work goes. In my career as a designer and illustrator, I’ve been fortunate to have done packaging, environmental graphics, branding and logos, architectural installations, editorial illustrations, public sculpture, apparel design – pretty much if it’s a discipline of design or illustration, I’ve done it. But one niche I have very rarely been asked to do has been book covers.


I’ve found that of all the design disciplines, book cover design is the most sovereign. What I mean by that is while a logo designer might be able to cross over into the package design realm, book cover designers are an island to themselves. It seems that either you are one or you ain’t. I don’t know why, but that’s the way it’s been since I started back in the 1980s, and I’m sure it was so long before that. So, with that unwritten ban in place, I’ve only done a couple book covers over the years. And that is why it has been such an interesting year for me. 2020 saw me doing no less than THREE book covers, with a fourth on my drawing desk right now. The first was Sol White’s Official Base Ball Guide, which I talked about HERE. But today, I’m going to talk about the second book cover I did: That Lively Railroad Town: Waverly, New York and the Making of Modern Baseball, 1899-1901 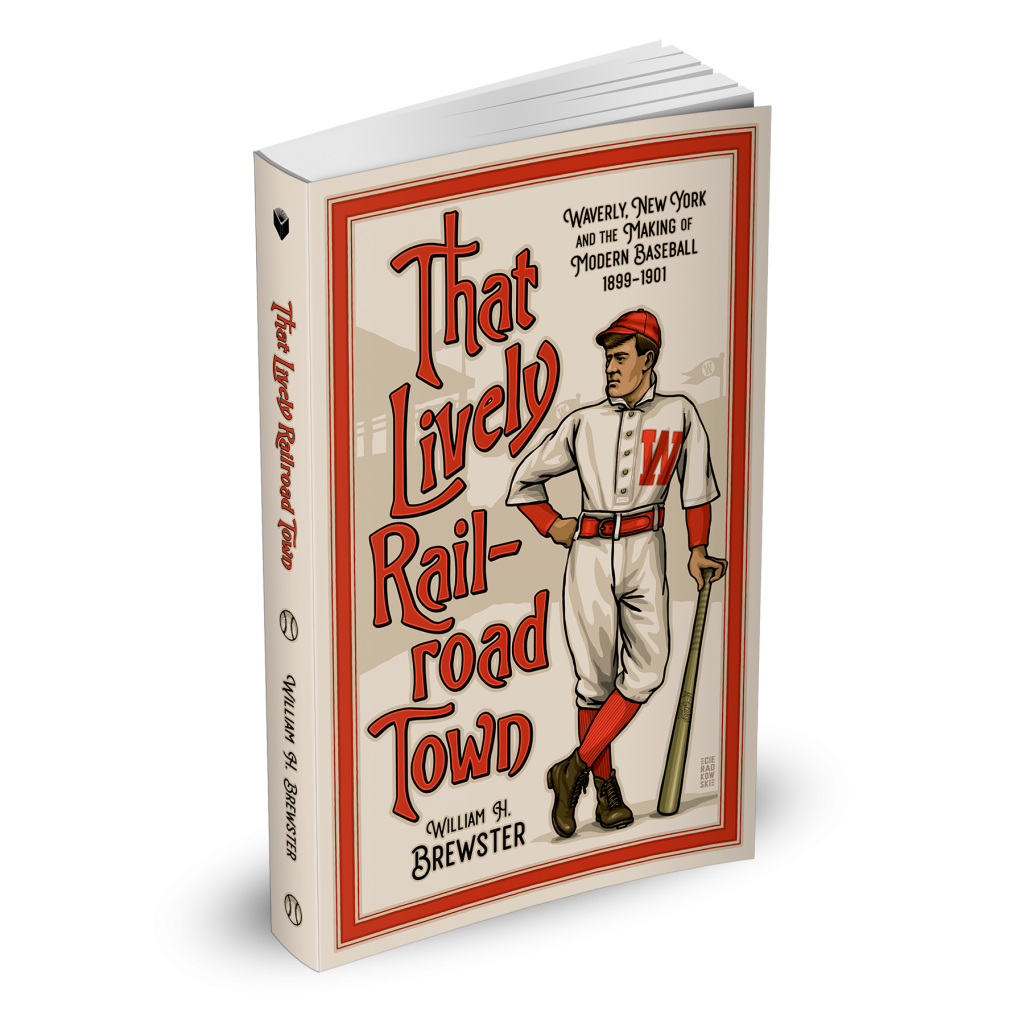 How I came to work on the book is that the author, Bill Brewster, sent me an email. This is important to note, because rarely does an author have the foresight to source his or her own illustrators for their book covers. Most publishing houses employ their own in-house art department, and they throw in that service for free. The last thing most authors have in their mind after completing the arduous task of writing and publishing a book is the cover. Sometimes, however, you get an author like Bill who has a specific look and feel in mind for his creation. And since That Lively Railroad Town: Waverly, New York and the Making of Modern Baseball, 1899-1901 is the sequel to his earlier book, The Workingman’s Game: Waverly, New York, the Twin Tiers and the Making of Modern Baseball, 1887–1898 , Bill is completely invested in the story he has taken on the task of telling. What is that task you may ask? Well, I’ll let Bill tell you:


“That Lively Railroad Town” is how a Sporting News reporter described my hometown of Waverly, NY, in early 1901, when discussing it as a haven for top baseball prospects. At the time, Waverly was at the center of multiple railroad lines, with an aggressive semi-pro team competing with similarly ambitious regional towns for talent, commerce, bragging rights, and a coveted franchise in the New York State League.

That The Sporting News considered little Waverly to be a baseball destination was not completely surprising, as the major league situation at the time was in disarray. Attendance and popularity were plummeting, and many viewed the National League’s monopoly as debilitating. In an effort to assert their rights and grow the game, major league players in 1900 organized the Players’ Protective Association (PPA). This coincided with Ban Johnson positioning his American League as a rival to the National. At the very center of this major league activity was former Baltimore Oriole Captain Harry L. Taylor, the PPA’s counsel, a Cornell University graduate and a former Waverly second baseman.

The intertwining of these stories is at the heart of the book. Although the main characters are minor league journeymen with their own unique stories, many future Hall of Famers like Christy Mathewson, John McGraw, Hughie Jennings, Clark Griffith, Vic Willis, Sol White and Frank Grant also play important roles. In addition, there are plenty of “cup-of-coffee” major leaguers, like Bill Ging, Sandy McDougal and “Moonlight” Graham, as well as bona-fide major league stars like “Wild Bill” Donovan, “Wildfire” Schulte and “Heinie” Wagner.

Most of these players, regardless of level, found themselves in many very compelling game situations. Righthander Bill Ging, for instance, a native of Elmira, New York, had a major league stint with Boston in late 1899, twirling a magnificent complete game victory over the New York Giants before a wind-swept autumn crowd at the Polo Grounds. Despite the success, he never received another major league shot.

The book was very enjoyable to research and write, and I hope that baseball fans and history buffs alike will find it enjoyable and interesting, especially against the social and political backdrop of the tumultuous 1900 Presidential campaign, its tragic aftermath, and the major leagues’ subsequent climb to unprecedented attendance, popularity, and stability.

So, with an author like Bill Brewster, who has mined the obscure corners of history to bring a story like that to life again, you have a guy who recognizes the need for a unique and appropriate cover to house his ambitious work.

I began work on the cover by first talking to Bill. Since this is the sequel to his previous book on late 19th century Waverly baseball, he is thoroughly familiar with the subject and had some solid ideas for the “feel” of the cover. One reference he kept coming back to was turn of the century sheet music. 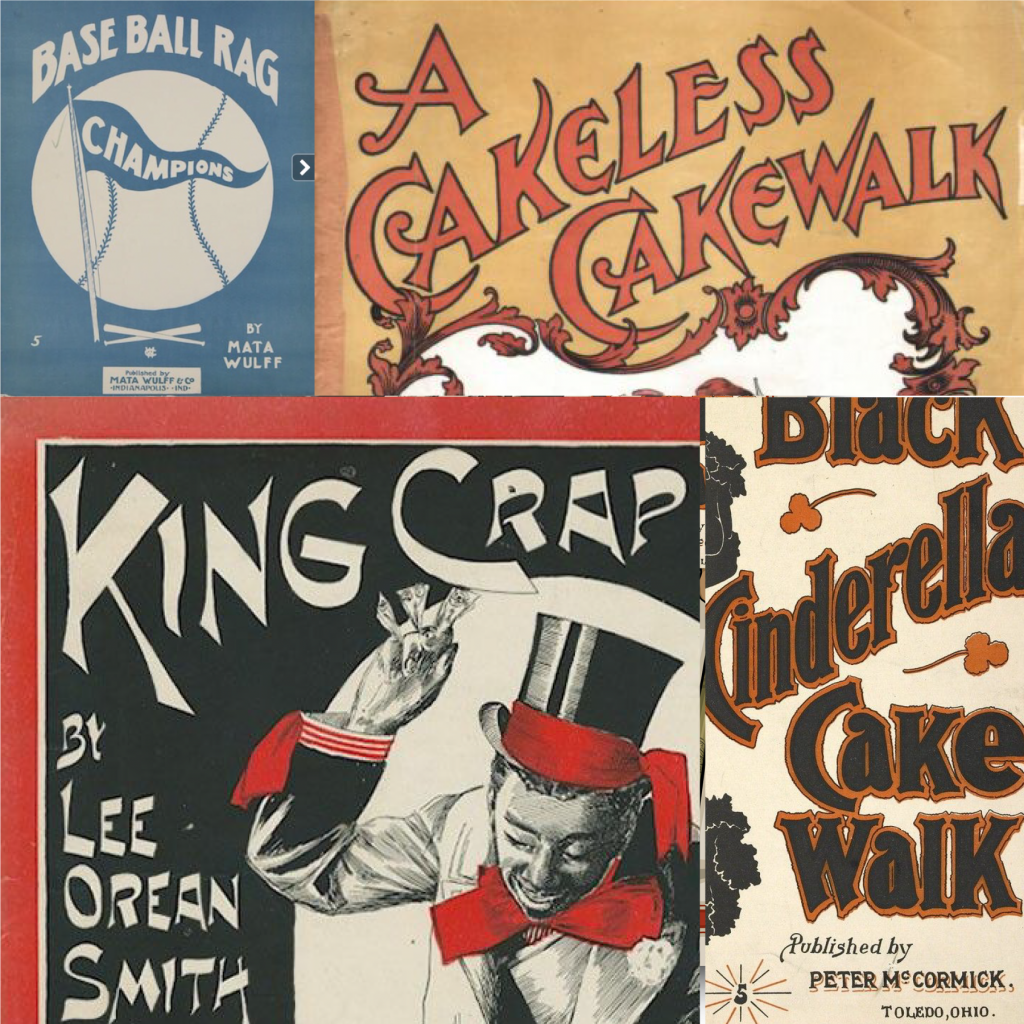 These thin paper booklets featured the finest illustrative covers which served to attract consumers just like record covers did in later years. I instantly knew what Bill was talking about because I was very familiar with vintage sheet music. I envisioned some nice hand drawn, playful lettering for the title that was evocative of the idea of Waverly, NY being “That Lively Railroad Town.” I felt the main focus should be one of the team’s star players, and Bill suggested Fred Tucker. With all the elements identified, it was just a matter of juggling them to come up with the best composition. In the end, I liked the typography of the title “dancing” down the left side, framing a heroic-looking Fred Tucker. 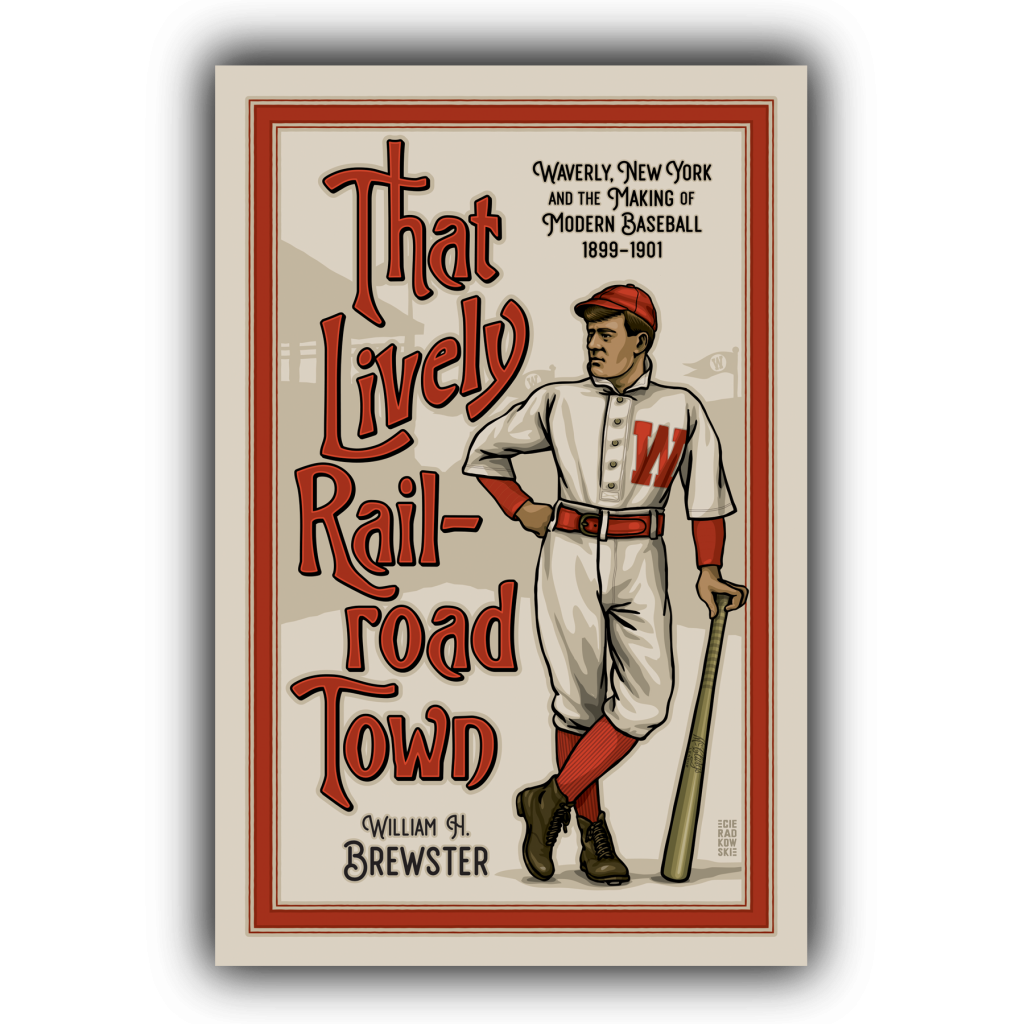 I thought the final gave it that vintage sheet music look Bill was envisioning, while remaining entirely baseball in nature.

Next, I had to illustrate more than a dozen ballplayers to accompany Bill’s text. Because photographs of Waverly’s ballplayers are hard to locate, and when they are they are usually of very poor quality, Bill wanted to have clean portraits of some of the key characters. I went with a simple black and white ink drawing style, with shading added with halftone screens. Halftone screens are the dot pattern you see in comics and newspaper photos. They give a good shadow effect while also keeping the illustration from greying out too much or getting too dark. It has the additional effect of mimicking the illustration style you would see in a book published around the time That Lively Railroad Town takes place. Below is a mock-up I did to show Bill how one of my portraits looks when inserted into the text of the book: 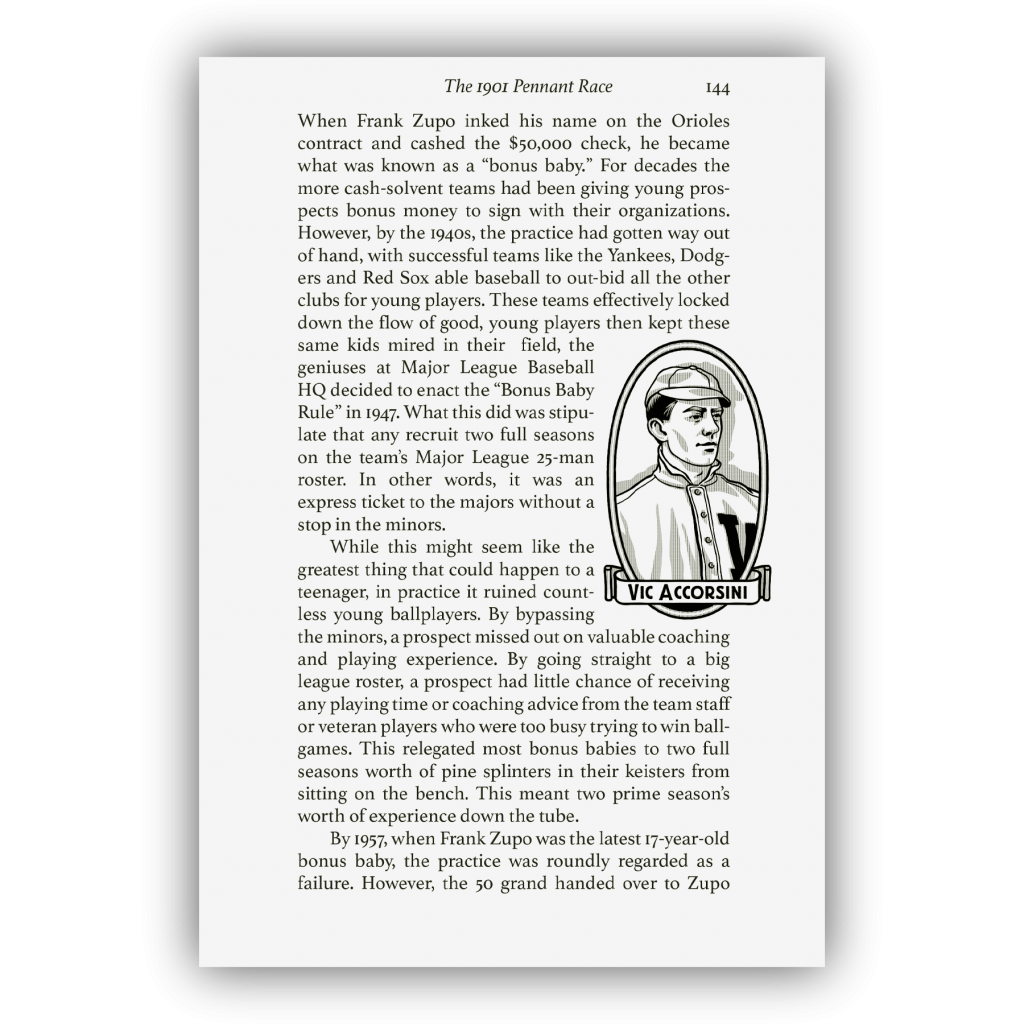 The final part of the assignment was to do a full-page illustration of Bill Ging, the Waverly pitcher who had a cup of coffee in the majors. Bill asked me to illustrate Ging on the mound against Albany. It was enjoyable working with Bill to get the little details correct, such as the local beer advertisement on the scoreboard and the distinctive New York State Capitol building beyond the outfield wall. The illustration in the book is done in the same black and white style as the smaller portraits, but I also created a color version that Bill could use for advertising and promotions. 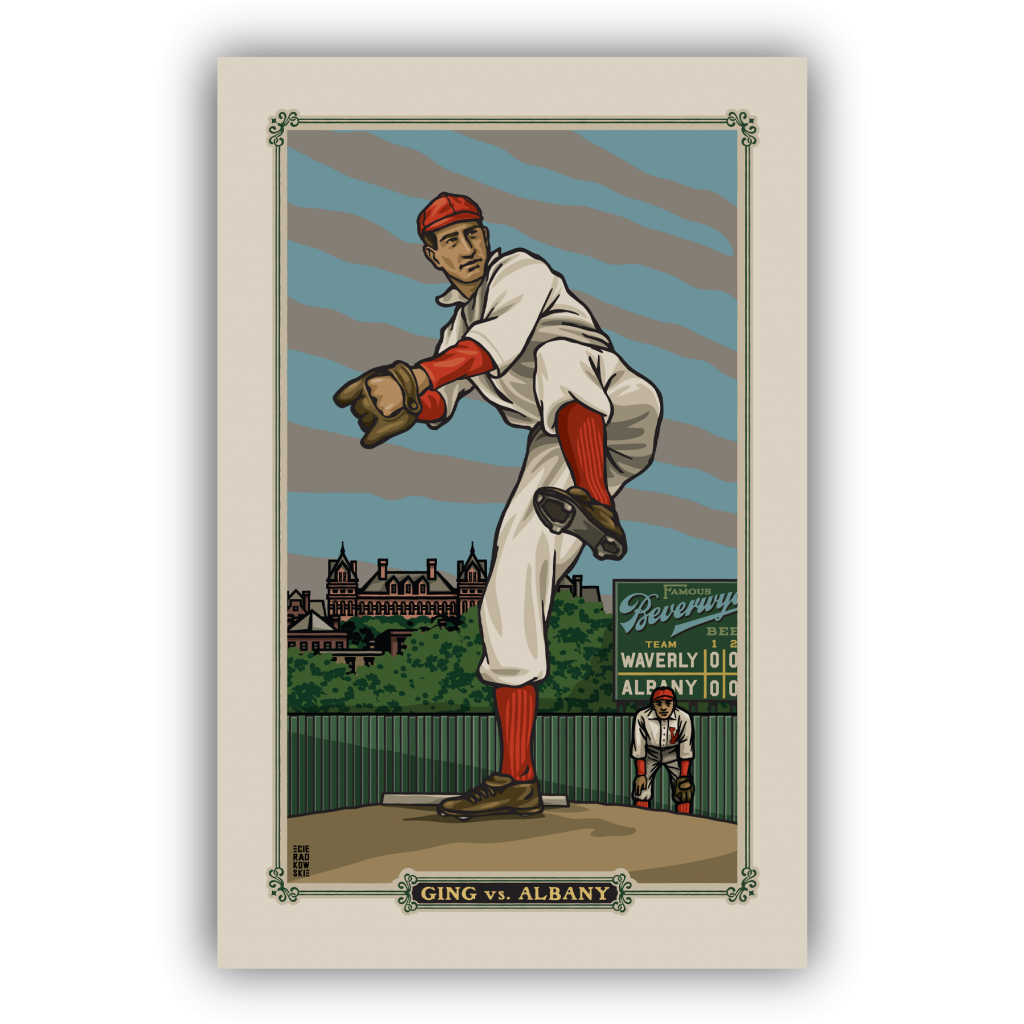 All in all, this was a fun project to work on. I enjoyed working with Bill, and especially appreciated his passion for this small corner of Outsider Baseball history. I highly recommend both of Bill’s books, The Workingman’s Game: Waverly, New York, the Twin Tiers and the Making of Modern Baseball, 1887–1898 and the sequel That Lively Railroad Town: Waverly, New York and the Making of Modern Baseball, 1899-1901. I’m thinking if you order soon, it’ll get there in time for the holidays…

One thought on “Recent Work: That Lively Railroad Town Book Cover and Illustrations”