IT WAS HALFWAY through the 1932 season when Vince DiMaggio finally suited up for his hometown San Francisco Seals. It had been a hard road to get there – he was the third son of Giuseppe, a strict, tradition-bound fisherman from Sicily who had zero tolerance for sports. Vince had to leave home in order to pursue his diamond dreams, bringing down the wrath of Giuseppe, who disowned his wayward son. But now, after a good showing with the Seals’ farm team in Tucson, Vince was called up to the Pacific Coast League, one rung away from the majors.

With three games left in their 1932 schedule, the Seals found themselves short-handed when a couple of the regulars jumped ship to barnstorm in Hawaii. Risking even more enmity from his old man, Vince recommended his younger brother Joe to the manager as a fill-in shortstop. Just 17 at the time, Joe was already a neighborhood legend for the way he could hit the hell out of the ball.

The younger DiMaggio batted just .222 in 9 at bats, but remember, he was still a teen and was playing in what could almost pass as a third major league. Anyway, it was good enough to merit a call back the next spring when the Seals opened their training camp.

THE FIRST THING the Seals did was move Joe to the outfield; he had a great arm but was wild. In the outfield they could make better use of his long legs and that strong arm would be an asset instead of a liability. Free from the pressure to perform in the infield, DiMaggio concentrated now at destroying the Pacific Coast League pitching.

On May 28th, he went 1 for 4 against the Portland Beavers, and continued to have a hit in every game for the next 61 games! The younger brother was becoming the star of San Francisco, and along with the thousands of strangers who followed his career closely was his father Giuseppe, whose negative view of the game of baseball had quickly dissipated when he found out Joe was making more money a month playing ball than he did as a fisherman. The old man welcomed oldest brother Vince back into the family as well, and Giuseppe remained a fan of the game until his dying day.

On a side note, Vince, the sole reason Joe was even wearing a Seals uniform to begin with, was released by San Francisco after the start of the season, his place in the outfield taken by his little brother. Fortunately, he was quickly snatched up by the Hollywood club, and his career remained on track, reaching the majors in 1937, a year after Joe.

SO, JOE’S FIRST full season in organized ball not only saw him shattering the league record for hitting safely in continuous games, but he also hit a monstrous .340 with 28 home runs. Not bad for an 18 year-old! Baseball fans throughout the country were becoming transfixed by the young Italian from the coast as news of his great talent splashed across their sports pages.

Italian-Americans, one of the fastest growing ethnic groups on the west coast, embraced Joe as a hero. Right at that same time, Hank Greenberg was emerging as one of the greatest hitters in the major leagues, giving Jews a sense of pride that one of their own was making good in America’s Game. In the modern context, it is hard for us to fully comprehend how important the sense of belonging was to recent immigrants and their children. Unlike today, when many people hyphenate their nationality in an attempt to separate themselves from the fabric of the country, players such as Hank Greenberg and Joe DiMaggio gave the newest Americans a star of their own to rival any player who came before him, proving religion or ethnicity doesn’t matter. The Greenbergs and DiMaggios made them belong

SIDEBAR: WHAT’S IN A NAME?
The first thing that jumps out at you when you look at Joe DiMaggio’s rookie card in the 1936 World Wide Gum set is his photo. You couldn’t have coached the rookie to give a more despondent gaze than the one on the front of the card. But it is the back that is particularly interesting; there, his name is given as:
JOSEPH “DEADPAN JOE” DIMAGGIO
Wait – what? Deadpan Joe?
For a guy who would later be known as “The Yankee Clipper,” one of the most majestic nicknames in all of sports, “Deadpan Joe” comes as a shock. It seems more fitting for a guy who hangs around a poolhall taking bets on college basketball games than it does for the most promising prospect in baseball. But, as far back as 1933, Joe was indeed known by that name. The reason why has a few slight variations, but this one from the February 24, 1934 New York Journal is typical: “The kid from North Beach hadn’t been with the Seals for more than a few days when his teammates nicknamed him “Dead Pan Joe.” He had nothing to say. Fisherman are seldom loquacious… for the sea teaches silence.”
* * *

THE NEXT YEAR, Joe’s career almost ended as quickly as it began. The official story went he was getting out of a cab while visiting his sister and twisted his knee in the gutter between the taxi and curb. Later stories came out he was injured while getting into his own car after a big night out at Frisco’s Market Street nightclubs. Whatever the real story was, the result was that he tore all the ligaments in his knee, a possibly career-ending injury back in 1934. Surgery for such an injury didn’t come about until decades later, and all the doctors could do was put him in a cast and hope for the best.

Because of his 61 game streak and great season the year before, Joe DiMaggio was already a known name in the baseball world, regarded as the next big thing. The Red Sox, Dodgers, Cubs, Indians and Giants had all put in bids for the 19 year-old, but now their scouts warned them to keep their distance. One wired his boss:

As Joe sat on the sidelines hoping for the best, one team remained interested. This particular ballclub, known for their shrewd headhunting of talent, recognized that the best baseball prospect in the land could now be had for a bargain basement price.

Their scouts quietly took the wounded prodigy to a battery of doctors who all gave the thumbs-up for a full recovery. Unaware of the positive prognosis, the disappointed Seals ownership agreed to sell their biggest attraction for a quarter of what they were asking before the accident.
A $25,000 check was cut, five bush league nobodies were transferred to Frisco, and Joseph “Deadpan Joe” DiMaggio became property of the New York Yankees.

JOE’S KNEE healed up just fine, and he played the last half of the 1934 season, batting a reassuring .341. When the Yankees bought DiMaggio’s contract, the plan was to have him play with their top farm club in Newark, but later agreed to let him remain with San Francisco for the 1935 season.

There was one problem: Joe refused to play for the Seals unless he received 15% of what the Yankees had paid for his contract. Whereas today this does not seem unreasonable, back in 1935 players did not expect to see any part of the big money that exchanged hands when they were dealt between clubs. Joe also broke with tradition by enlisting his older brother Tom to act as his agent. The holdout lasted well into spring training before it was resolved, the terms of which were undisclosed. Tom would remain as Joe’s agent in later years, and was a participant in his brother’s disastrous 1938 contract holdout with the Yankees.

DIMAGGIO FINISHED his minor league career by batting a colossal .398 with 34 home runs as the Seals won the pennant and he was voted the league’s MVP. By this time, there was no doubt Deadpan Joe from the Coast was ready for the big time – but it wouldn’t be the last time his Hall of Fame career would be threatened by a freak accident…

This week’s story is Number 29 in a series of collectible booklets. 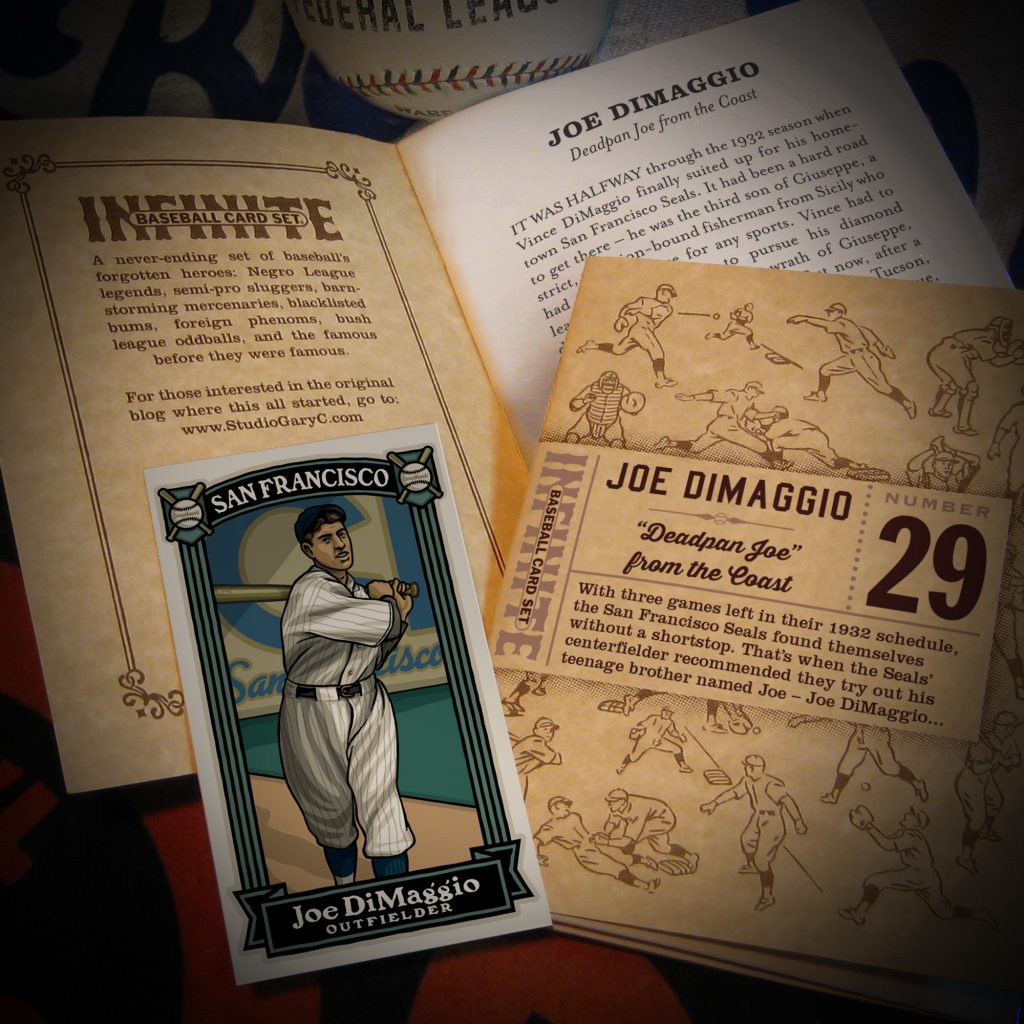 Each of the hand-numbered and signed 4 ¼” x 5 1/2″ booklets feature an 8 to 24 page story along with a colored art card attached to the inside back cover. These mini-books can be bought individually, thematically or collected as a never-ending set. In addition to the individual booklets, I envision there being themed sets, such as the series I did on Minor League Home Run Champions. You can order a Subscription to Season 2 as well. A year subscription includes a guaranteed regular 12 issues at a discounted price, plus at least one extra Subscriber Special Issue. Each subscription will begin with Booklet Number 018 and will be active through October of 2020. Booklets 1-17 can be purchased as a group, too.

As I was working this story, an interesting new book came in the mail, Dave Berger’s Take Me Out to the Ball Game. This fun book catalogs the seemingly endless ways big league ballplayers have injured themselves both on and off the field. I really enjoyed Berger’s book, it’s a perfect balance between storytelling and statistics, making it an ideal book to pretty much any baseball fan. The reason I’m bringing up Dave’s Take Me Out to the Ball Game is that one of the entries in the book talks about Joe DiMaggio’s  other injury that almost ended his career before it began. Here’s what Dave’s book has to say about that:


Joe’s second brush with a major injury occurred in the spring of the 1936 season. Joltin’ Joe wasn’t joltin’ after this incident. During an exhibition game, someone stepped on his foot and as a result his began to swell. He received treatment that included placing the foot in a diathermy machine, where we was left unattended. How in the world does someone leave the Yankee number one prospect unattended? The heat control was not adjusted properly, burning his foot so badly that DiMaggio had to have two large blisters pricked. He then spent two days in the hospital. He missed the first 16 games of his 1936 season with first-degree burns on his foot. He did make a nice comeback to hit .323 with 29 home runs and 125 RBI’s.

If you’re looking for a good read that’s equal parts entertainment and history of the game, then pick up a copy of Dave Berger’s Take Me Out to the Ball Game. I found it perfect for my afternoon coffee break, the entries being the right length to allow me to read a few before I head back into the studio, reinvigorated with caffeine and a couple good baseball stories to think about. You can find out more about the book at Dave’s website and by going to Amazon. 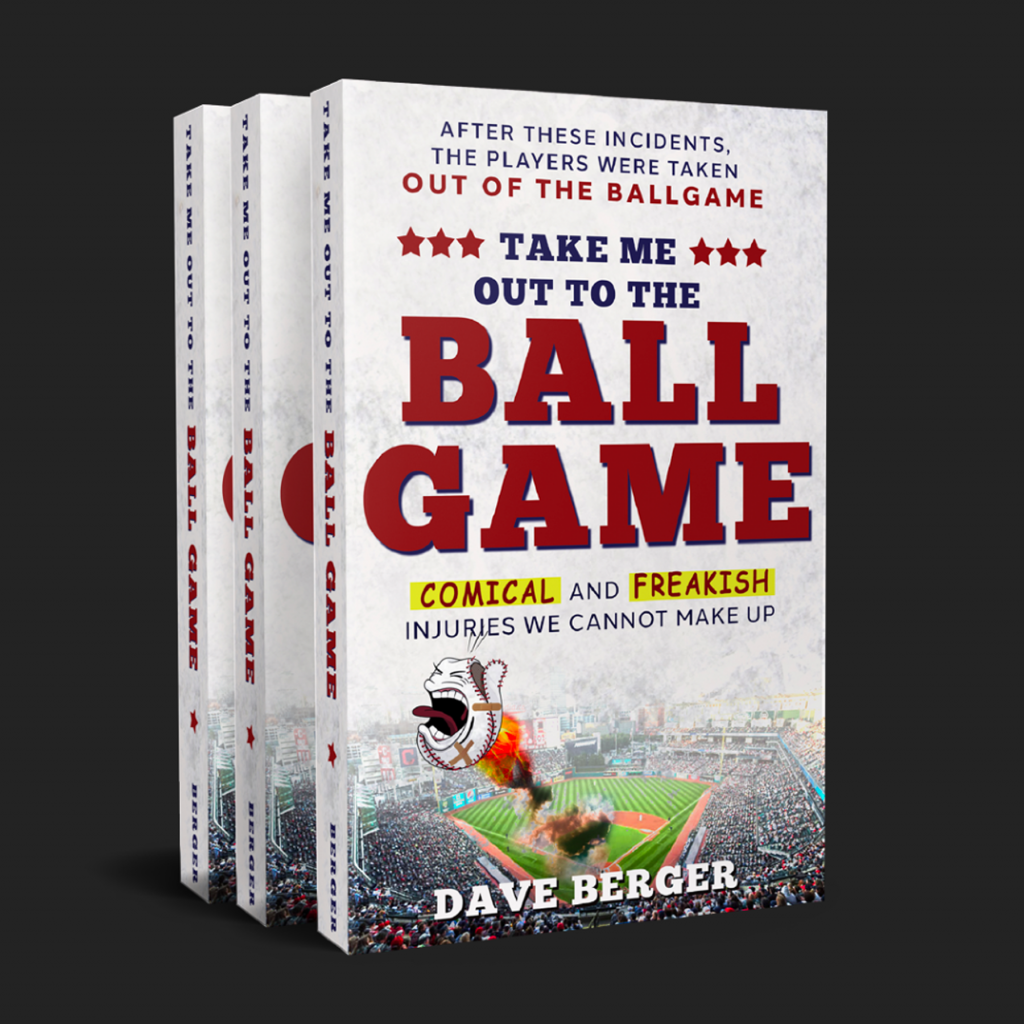