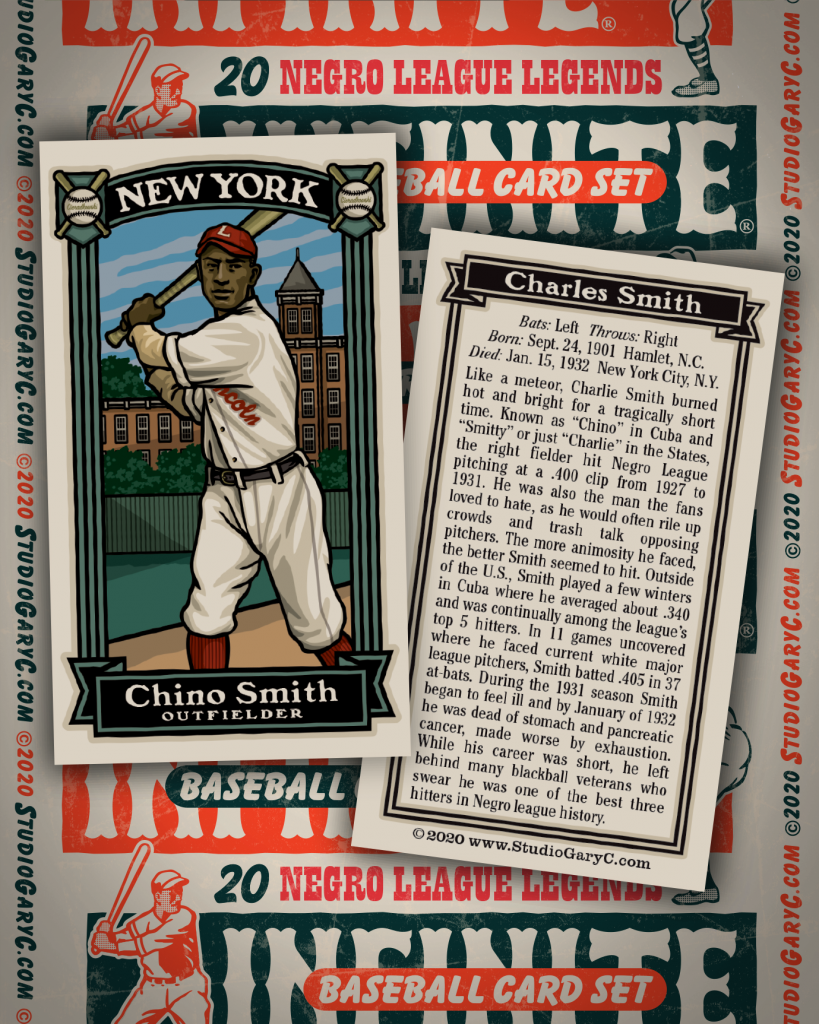 The air was electric. With the score tied up for the past 6 innings, the crowd had settled in the sticky late afternoon heat. After the first batter struck out, the number two man had just hit a cheap single that dropped behind the shortstop who was playing for a bunt. Now the crowd came to life. They knew who the man on deck was and what he could do. Chino Smith could break a ballgame wide open with a single swing of his bat. The stands were filled with taunts, screams, insults – even a few hats were launched onto the grass, but Chino Smith didn’t care.

Savagely throwing the two extra bats he used to warm up behind him, he strode slowly towards the plate. Instead of walking in a straight line, he swung deliberately out of his way towards the hostile crowd. The noise got louder and he paused at one point to gaze menacingly over his shoulder. His eyes, slightly slanting at the corners, gave him a faintly Asian look, and from that sprung his nickname – Chino. Turning back, he continued his walk to the plate. He kicked savagely at the dirt, digging a hole for his spikes to get traction. He swung the bat back and forth and finally pointed it at the pitcher.

His voice was loud, booming and eerily even. The crowd ate it up and yelled louder than before. They cried for the pitcher to stick one in his ear. The catcher said something, but no one could hear for the crowd. The pitcher didn’t say a word. He checked the runner on first.

The first pitch was close, a brush-back, up just beneath his chin. Fully expecting it, Chino dodged it and unleashed a foul stream of tobacco juice at it as it hissed by. The runner on first had taken off and took second standing up. Chino pointed at the runner, silently taunting the pitcher. The crowd loved it and hated it.

The pitcher pounded his glove and eyed the man on second.

“Cause if that’s all you throwin’, I’m gonna kill you today.”

The stands erupted with an even louder torrent of hatred. Someone threw a soda bottle. Chino suddenly made towards the box seats along the first base line but stopped after a few steps. A smile curled up from the edge of his mouth and he turned back towards the plate. The umpire kicked the bottle back towards the crowd.

The next pitch sailed in just a bit outside but still within reach. With a flick Chino smashed the ball straight back at the pitcher who feebly stabbed at the ball while instinctively jumping out of the way. The runner on second crossed the plate before the center fielder made the play and Chino stood on first base like he owned it. When the crowd quieted down he motioned at the pitcher.

The pitcher threw the ball in the dirt and charged towards first. The slight curl in the corner of Chino’s lips turned into a full-blown smile as he braced for the coming fight.

When it comes to Blackball, you take it for granted that due to lack of newspaper coverage, record keeping and plain-old racism that it’s tough to discern truth from myth. With a guy like Chino Smith, the waters become as murky as Lock Ness. His career was so meteoric and short that over the years he took on an almost King Arthur-like reputation. And like the Medieval knight, whose story is based in fact, much of what is repeated is not. Often called a small man, listed in most books as 5′-6″, if you just look at a team photo you can see he was most likely 5-11 or 6 foot. Not a giant, but average for a ballplayer in 1930. I reckon somewhere in some newspaper many years ago there is a typo that just kept getting reprinted. Even his great nickname “Chino”, which he is universally known by today, is not quite correct. While the Spanish language press and fans in Cuba dubbed him Chino, after his “Chinese-looking eyes”, in the States he was known to fellow players by the less racy “Smitty”, and to the public as just plain-old “Charlie,” his given name.

Though said to be from Greenwood, South Carolina, baseball archaeologist Gary Ashwill uncovered that Charlie Smith really came out of Hamlet, North Carolina. As a teen he added muscles by lugging baggage in New York’s Pennsylvania Station and honed his baseball skills playing for the ball club made up of porters like him called the Redcaps. Boasting quite a few future and former blackball players, the Redcaps were a valuable training ground and after a few seasons playing for second-tier teams, Smith turned pro in 1925. Smitty’s team, the Brooklyn Royal Giants, were one of the old independent blackball teams, but by 1925 they’d joined the Eastern Colored League. Playing alongside aging vets like Dick Redding, Bill Holland and Jesse Hubbard, Smith spent 1925 and 1926 getting his bearings and learning his craft. By 1927 he emerged as one of the most dangerous sluggers in the game.

In an era filled with hard characters, Smith quickly earned a reputation as one of the toughest. He was the grandfather of trash-talkers and decades later when old-timers tired of waxing poetically about Smitty’s skills with a bat, they often turned to talking about the verbal abuse he slung like line drives. Once in Cuba he’d had a bust up with the Yankee’s ace Johnny Allen which over the years turned into something of a legend. While some blackball players like Satchel Paige delighted crowds with good-natured antics, Smitty made them angry and dangerously on the edge. He deliberately riled up the crowd which in turn made him play harder.

Playing for the Royal Giants, Smitty averaged above .400 in league games in ’27 and ’28. In 1929 Smith moved from the aging Royal Giants to the New York Lincoln Giants, a younger and more competitive club. Just 28 and at his peak, Smith crushed the ball, going .465 and then .429 in 1930. He was the most feared batter outside the major leagues, which some might argue doesn’t mean a whole heck of a lot. A common argument is made that the Royal Giants and his next team, the Lincoln Giants, played their home games in an oddly shaped ballpark called the Catholic Protectory Oval up in the Bronx. It was shaped, as it’s name suggests, like an oval, much like the Polo Grounds where the New York Giants and Yankees played. The field had very shallow left and right field dimensions, making many modern historians look disparagingly at Smith’s Ty Cobb-like averages. On the surface that’s a great argument, but the Royals and the Lincolns didn’t play the majority of their games “at home”. Negro League teams traveled more than professional white teams and even league games were scheduled at neutral parks. The Lincolns, for instance, played some of their home games at Yankee Stadium during Smith’s career. In games played against the other big names of the day, Smitty hit as good or better than the best outsider baseball had to offer.

Like many of the big stars of the Negro leagues, Smith was invited to play winter ball in Cuba. Down in the Caribbean the Blackballers got to test their mettle against not only the best Latin players, but also against touring major leaguers and up and coming white stars. In the handful of winters spent on the island, Smith batted in the range of .340, putting him right about the top 10 of the time. In addition, pioneer blackball historian John Holway tracked down a slate of Stateside games in which Smith got to face off against active major league pitching (active big league hurlers, not washed up retreads throwing for semi-pro teams). Smitty clipped them at the same pace he did the Eastern Colored League pitchers: In 11 games against big leaguers, Smith had 15 hits in 37 at bats – that’s a .405 average.

The two best pitchers of Smith’s day, Baltimore’s Laymon Yokely and the eternal Satchel Paige, whose career spanned the 1920’s to the 1960’s, both put Smith in the top 3 of the toughest batters they faced. When Colonel Ruppert opened up Yankee Stadium to black teams in 1930, Charlie Smith was the star of the inaugural game. Facing the Baltimore Black Sox, defending champs of the American Negro League, Smith walked in the first, hit a two-run homer in the third, smashed an RBI triple in the fifth and then wrapped it all up with a three-run homer in the seventh. Nothing it seemed, could stop Smitty.

Sometime during the 1931 season, Smith started to feel sick. Self-medicating with a variety of different elixirs failed to prevent his batting average to plummet. Traveling to Cuba for the winter season, Smitty played a few games and then returned home to his wife in the Bronx. Less than a month after Christmas he was dead. Some attributed his illness to a game against the Homestead Grays when he took a knee to his stomach during a savage collision with Walt Cannady; others say it was yellow fever picked up in Cuba. Baseball archaeologist Gary Ashwill however put an end to the speculation when he uncovered Smith’s death certificate which stated he died of stomach and pancreatic cancer. He was just 31 years old.

Call him Chino, Charlie or Smitty, he was no doubt one of the best.