One of the best perks of being a member of the Society for American Baseball Research (SABR) is the two publications they put out each year: National Pastime and Baseball Research Journal. National Pastime used to be more of a general baseball history journal with very interesting and wonderfully random articles about historical players and teams. Many of the deans of baseball history today got their start with an article in National Pastime. In the past 10 years or so, the NP changed course to become the yearbook for the annual SABR convention, with all the articles pertaining to whichever city it is held in. Although I miss the wild randomness of the earlier volumes, it’s still a happy day in the Cieradkowski household when the new National Pastime shows up in the mail.


During this past summer, I was contacted by Scott Bush, Chief Executive Officer of the Society for American Baseball Research, who asked if I would be interested in doing a redesign of the other SABR publication, Baseball Research Journal. The assignment consisted of designing a new masthead as well as the cover illustrations for upcoming issues. The Baseball Research Journal, or BRJ, is SABR’s flagship publication. Now over fifty years old, BRJ was, as its website states, “created so that members could publish and share their research with like-minded students of baseball.” There’s no other journal or publication like it, and my back copies reside on an easy to reach shelf in my studio.


It’s not often that I get to design or illustrate something I actually use or subscribe to. And while some may think this would be a slam-dunk kind of a job, I find these assignments difficult. Sometimes being close to a subject becomes an obstacle that makes seeing a solution challenging. In my case, I become flooded with too many ideas and concepts, and I have to find a way to mentally brush all of them aside and start fresh. One of my longtime “clear the cobwebs” solutions is to get a haircut. Seriously. It’s a thing I started thirty years back when I was working my first design job back in Baltimore. I can’t recall how it started, but I found that sitting in a barber’s chair really relaxed my mind. So I went to see Marc, who’s been cutting my mop since 1995. I think I’ve known Marc longer than most of my close friends.


Thirty minutes and a trim later, I was good to go with a clear path of how I wanted to proceed.

For the masthead, I had discussed with SABR CEO Scott the idea of keeping it simple, with just a straight line of type which the cover illustration can interact with, kind of like the old Saturday Evening Post and other covers did back in the 1920s-50s: 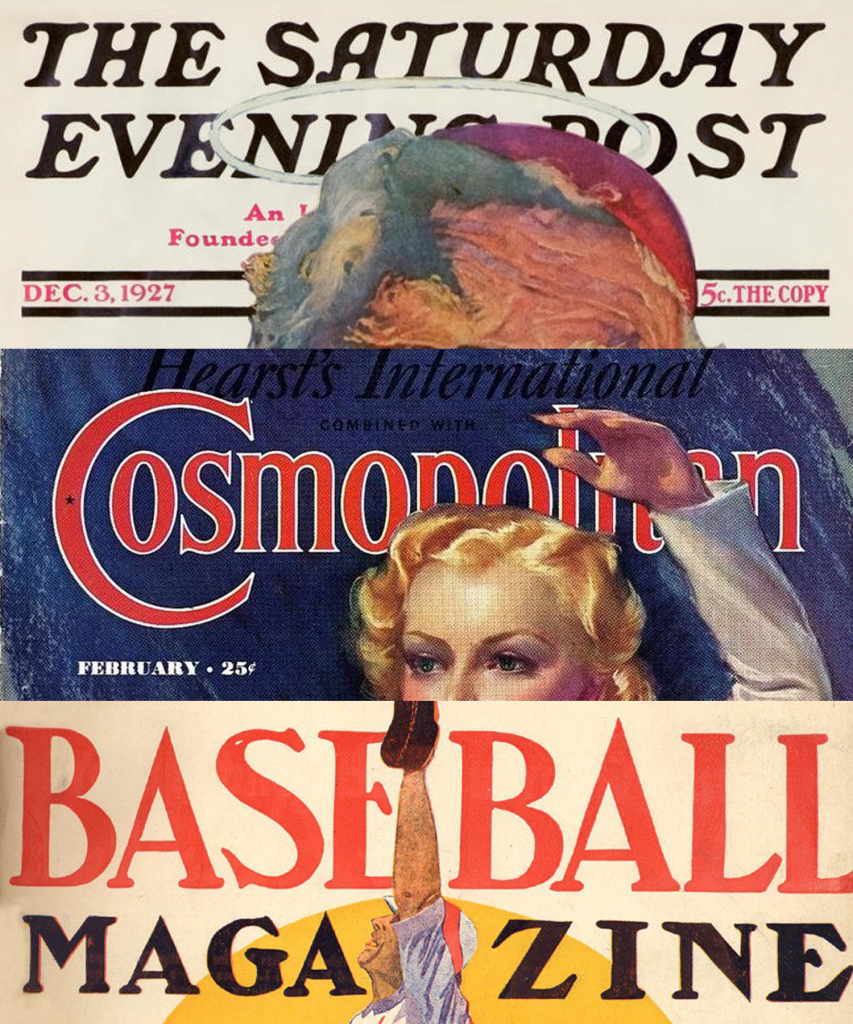 Not wanting to do just a line of computer type, I liked the idea of varying the widths of the typefaces to reveal a secondary meaning. I know, that’s a lot of designery speak, but stay with me. The Baseball Research Journal has long been referred to by its initials, BRJ. What I wanted to do was include both the full name in the masthead along with the secondary BRJ title.  I thought the simplest way to do that would be to use a modern version of the old broadsheet poster typography style from the first half of the 1900s. These posters commonly use a bolder or larger letter at the beginning of each word in the title to attract the viewer’s eye. Here’s a few examples: 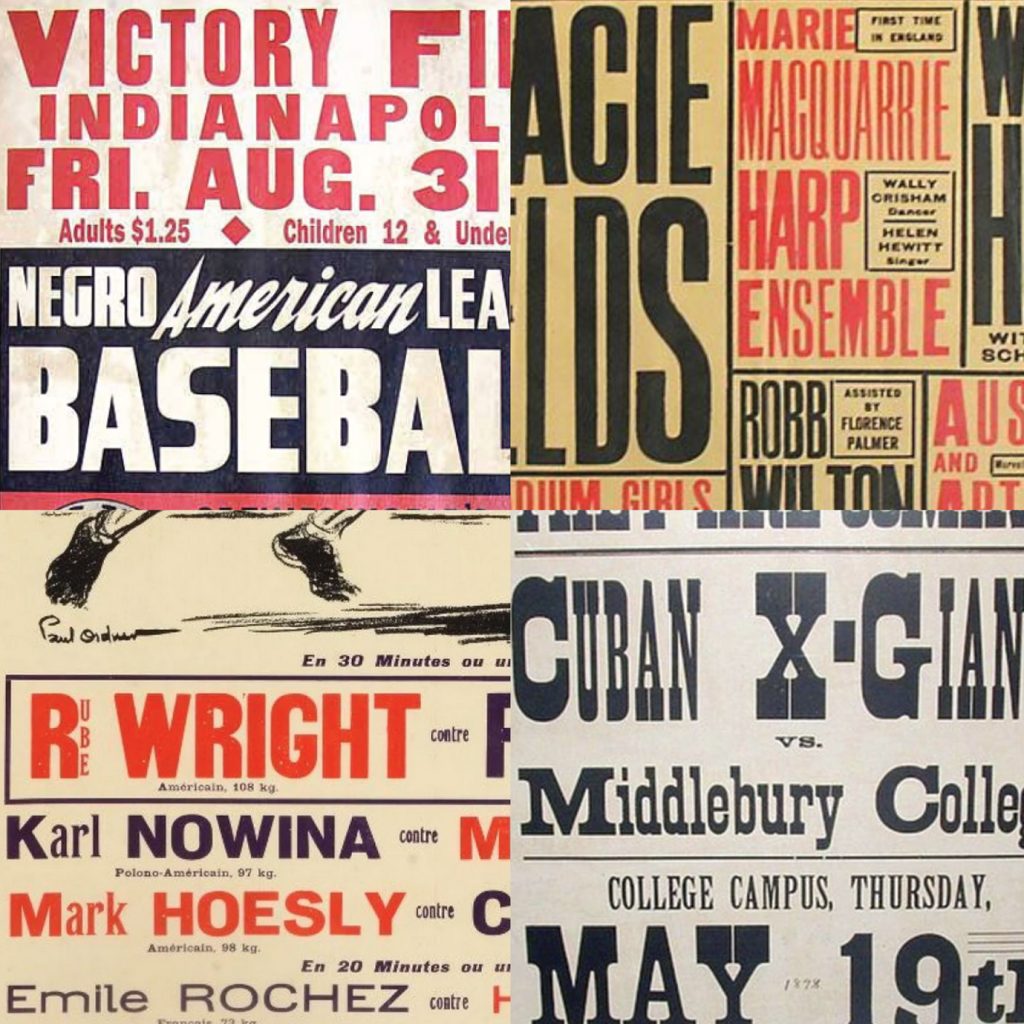 Using the big first letter method I was able to call out the letters B, R, and J in the title, giving me the secondary meaning I was looking for:

With the masthead settled, I now was ready to tackle the first cover illustration. Every magazine and journal has their main article in every issue, and this is what appears on its cover. BRJ is no different, and I looked forward to hearing what the topic for the Fall issue would be. I was pleasantly surprised when SABR’s Publications Director, Cecelia Tan, gave me the topic for the Fall 2020 edition: Josh Gibson. The issue features an article by Alan Cohen called Josh Gibson Blazes a Trail: Homering in Big League Ballparks, 1930–1946. If you haven’t guessed by the subtitle, Cohen’s story is about the home runs Gibson hit in big league parks.

The trick to doing the cover for BRJ is that I wanted to illustrate the topic of the featured article, but at the same time create a stand alone piece of art that would not need the title of the article to make the viewer understand what is being depicted.

Like I do for much of my work, I came up with the cover idea while on my morning walk. I knew I wanted it to be a heroic version of Josh Gibson, a bold, confident pose of the great catcher with a stylized Yankee Stadium as his backdrop. I also envisioned a golden yellow monochromatic background against which Gibson in his white uniform could stand out. I did a quick sketch as soon as I got home, which included my specific color notes. I then collected all the Josh Gibson photos I had on hand and did a gestural drawing of the pose I felt looked right. 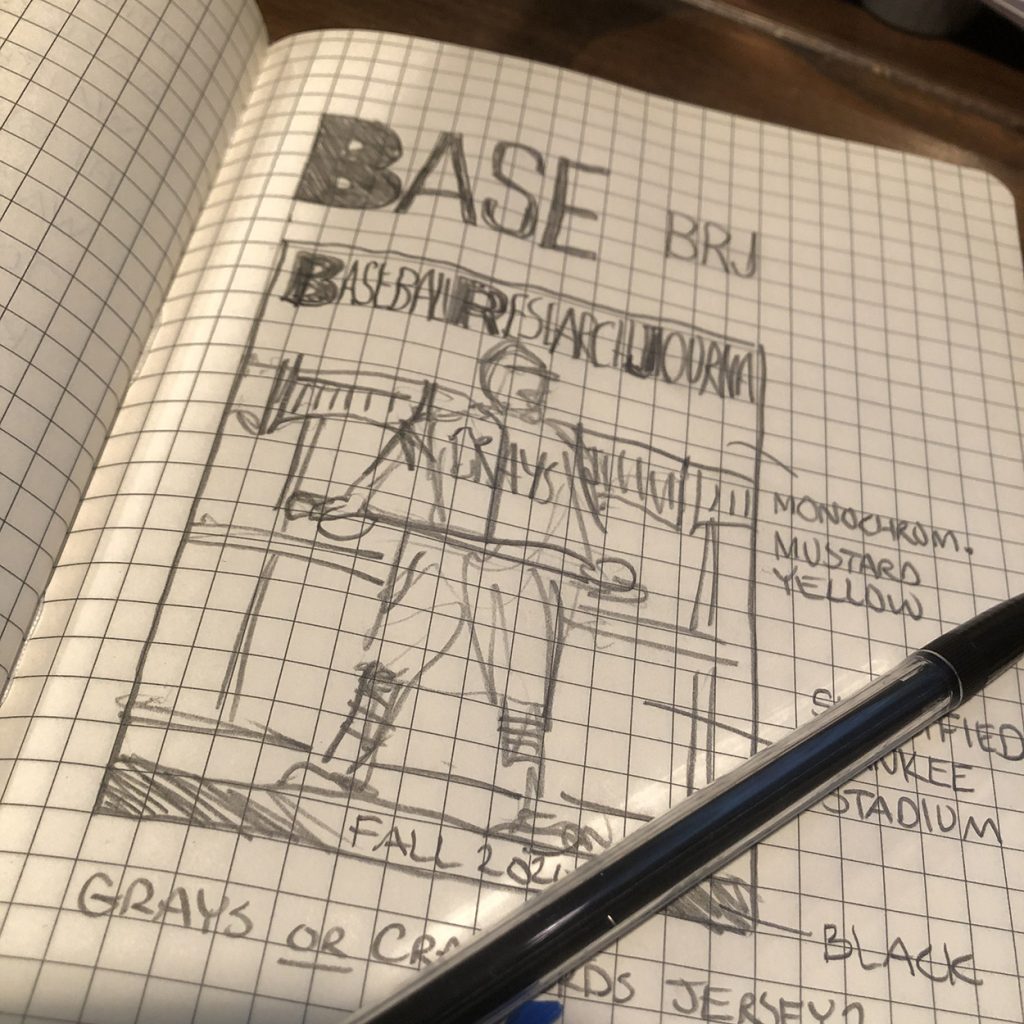 For the style, I went away from my usual realistic and detailed portraiture and employed a more paired down, gouache painterly style in the same vein as the great German and Austrian plaketstil artists of the early 20th century. The thick, hard line work draws from Lucian Bernhard, the facial aspects from Louis Oppenheim and the play of the light and shade in the background are a nod to Ludwig Hohlwein and Hans Rudi Erdt.

Once I started working on the illustration, it went pretty quickly, mostly because I had an exact idea in my mind beforehand, and all it came down to was executing what I saw in my head. The finished design looked like this: 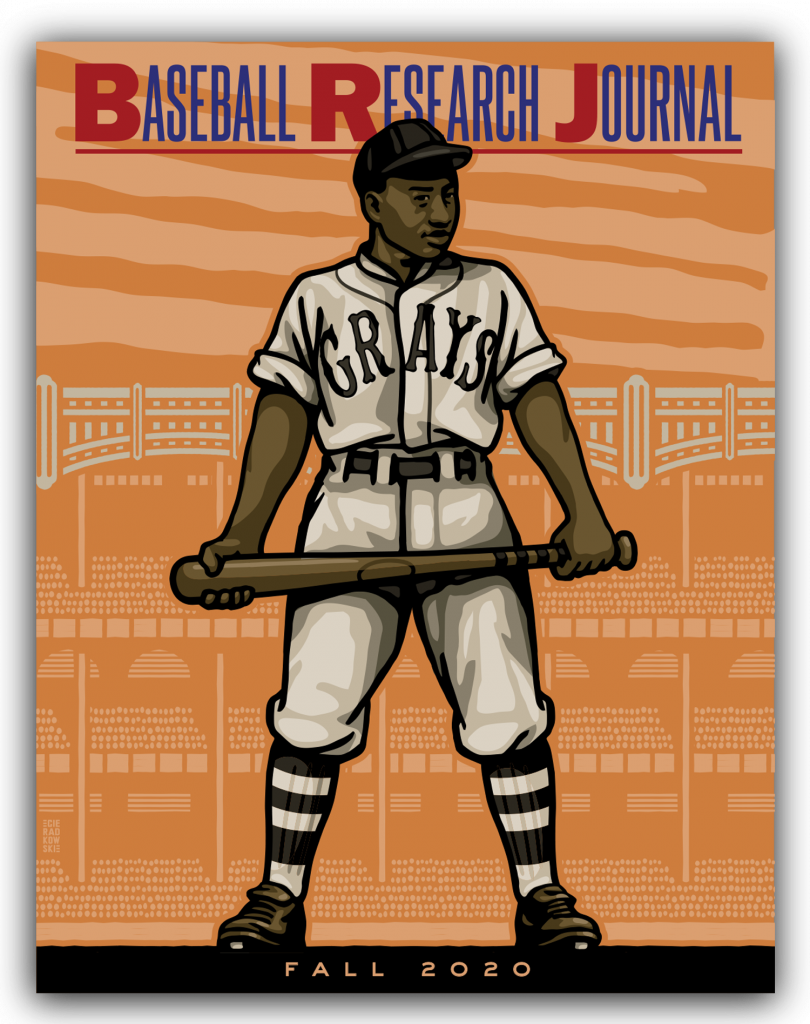 Now I usually stick with my first idea because I often find that it was the best one. This isn’t because I’m brilliant or anything, but because I spend much time thinking a concept through before I even take up a pen. Most artists will use a sketchbook for this phase, but over the years I had moved towards doing it all cerebrally. It saves money on paper but, then again, I don’t have those flashy sketchbooks that many artists like to show off on Twitter and Instagram.

So anyway, when it comes down to doing the actual piece, I have gone through many concepts and ideas already, only it was all in my head. However, when I finished this piece, I had a desire to see what would happen if I added one more color. I chose blue, which I added to the sky. I surprised myself by actually liking the outcome: 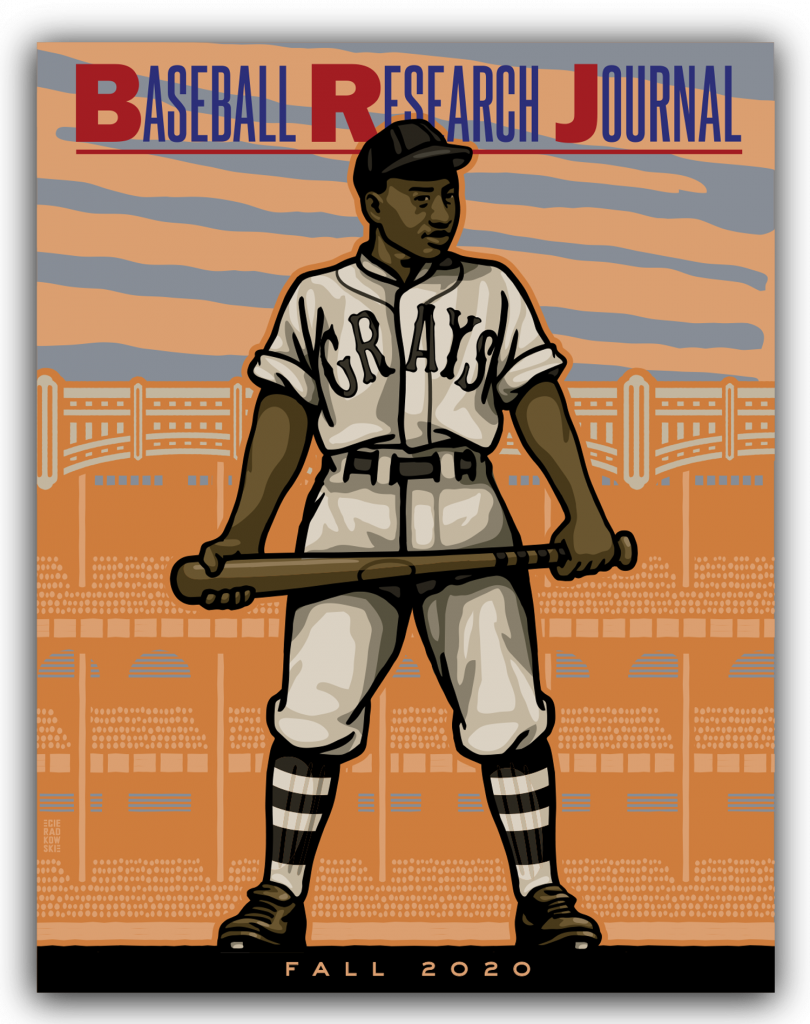 I felt it added a little something extra to the portrait, without totally going away from my original idea of a monochromatic golden yellow color background. To see which one was better, I sent both covers to a circle of my friends to see what they preferred. The blue version won out by a wide margin. I then sent the cover out to SABR president Scott Bush and editor Cecelia Tan to see what they thought. Again, the blue version won out. I wrapped things up by adding a small SABR logo to the front, doing the production art for the printer and submitting it.

I hope you enjoyed the story of my first cover for the Baseball Research Journal, and I look forward to seeing what the topic for the Spring 2021 edition will be…