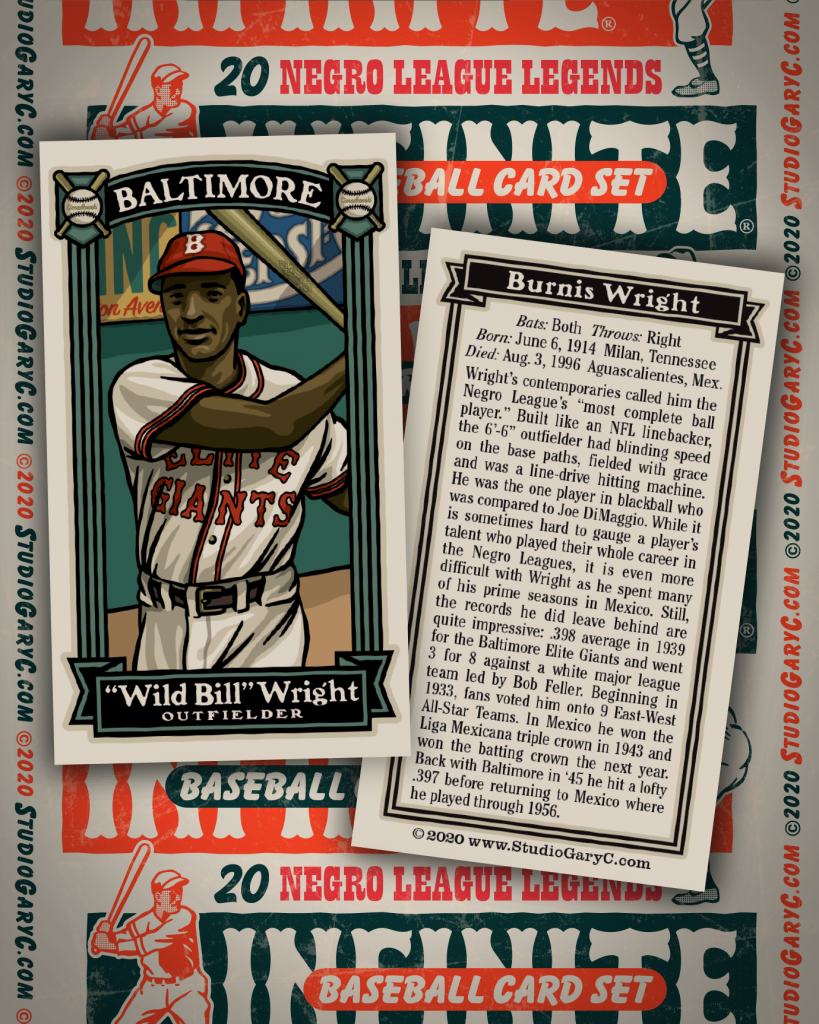 Ever since I was a kid researching the Negro Leagues on microfilm and ancient bound newspaper volumes, I always wondered how certain players would have done had there not been a color barrier. I’m not talking about guys like Josh Gibson, Satchel Paige, Leon Day or Martin Dihigo – those guys were sure-fire big league stars. I’m talking about those second-tier stars, you know, the Dale Murphy’s to the Wade Boggs’.

One of those players I often wondered about was a fella named Wild Bill Wright. I had first discovered Wright through old box scores, but it wasn’t until I met a few oldsters in Baltimore who saw him play firsthand that I really came to appreciate him. For a time, Wright was one of the premier stars of the Negro National League, and looking at his numbers and testimony from his peers, the name “Wild Bill Wright” should be well-known today. Yet. for a few reasons, it isn’t.

Burnis Wright was born in Milan, Tennessee in 1914. By the time he reached his teens he grew to the then enormous height of 6′-4″. Because of his imposing stature, Wright was put to work as a pitcher where he earned the moniker “Wild Bill” from his inability to find the strike zone. In spite of being built like a football player, he possessed lightening speed and graceful agility, making him perfect for covering outfield pastures.

Somewhere along the way he taught himself to hit from both sides of the plate, and word got around that Wright was something special. Being from Tennessee, it was only natural that the big kid signed with Tom Wilson’s Nashville Elite Giants in 1932. Wilson was a typical 1930’s Negro League owner – he made his money through a combination of legit businesses and illegal enterprises like the illegal lottery, called “the numbers” back then. Although Wilson kept his base of operations firmly rooted in Nashville, he was forced to move his Elite Giants through a succession of different cities in search of the most lucrative market. The teenager they called “Wild Bill” began working out with the Elite Giants, then eased into exhibition games, all the while learning about professional Negro League ball by watching the veterans.

Finally, in 1933, he began playing against other top-shelf Blackball clubs. The 19 year-old hit .328 – today a respectable average – but in 1933 Negro League offensive numbers were sky-high, so Wright was considered still a novice. This changed when he went West during the winter and played in the California Winter League. This loose semi-pro circuit was made up of a few all-white teams that featured major and minor league stars who lived on the coast and one all-black club filled with the best talent Blackball had to offer. This time Wright held his own not just against the white professionals but also the Negro League stars – his .351 average was bested only by Cool Papa Bell and Willie Wells, two future Hall of Famers.

In 1935, Tom Wilson moved his Elites to Columbus, Ohio trying to find a larger black audience for his team. Wright was batting close to .300 when he was voted to his first East-West Game, the Negro League’s All-Star classic held in Chicago’s Comiskey Park. Representing the East, Wright struck out as a pinch hitter. 1936 saw the Elites relocate again, this time to Washington, D.C. and again Wright was voted to the East-West Game. As a nod to his burgeoning talent, the 22 year-old was asked to join a Blackball all-star team that competed at the 1936 Denver Post Tournament, the World Series of semi-pro baseball. Five of the players on the champion Negro League team – Josh Gibson, Satchel Paige, Cool Papa Bell, Ray Brown and Buck Leonard, are now enshrined in Cooperstown. 1937 was probably Wright’s best year, at least in the Negro Leagues. Besides hitting .387 and being among the leaders in all offensive categories, Wright had two singles and a double in the East-West Game and his running catch of Newt Allan’s line drive saved the game for his team.

In 1938 the Elite Giants finally found a permanent home in Baltimore, Maryland. Wright had an off year, hitting under .300 and going hitless in four at bats in the East-West Game, but rebounded in 1939. Finishing second in batting with a .398 average, Wright and the Elites won their first and only Negro National League pennant. It was Wright’s double in the final game that sparked an Elite Giants’ rally that won them the Championship. Facing white big leaguers in a post-season exhibition game, Wright went 3 for 8 including a double off Bob Feller of the Cleveland Indians. At this point Bill Wright was just reaching his prime as a ballplayer. Due to his gracefulness in the outfield, Sportswriters referred to him as the “Black DiMaggio” and his speed on the base paths saw him finish at or near the top in steals each season. While he didn’t possess the slugging power one might expect from a 6′-4″ giant, Wright was always among the leaders in extra base hits. He mastered the art of the drag bunt, using his speed to beat out any throw to first. Although it can’t be definitively documented, legend has it Wright was clocked circling the bases in 13.2 seconds – the world record is 13.3 set by minor leaguer Evar Swanson in 1932. With a combined average of .371 against white big leaguers in post-season exhibition games, Wright undeniably demonstrated that he could not only hold his own against the best Blackball had to offer, but white professionals as well. Had he played out his entire career in the Negro Leagues it would be much easier for us to gauge the level of his talent and put it in easy to understand and translate figures. However, beginning in 1940, Wright left the Negro Leagues and went to Mexico to play ball.

Playing against the Negro League, Cuban and Puerto Rican stars who were lured south by lucrative contracts, Wright hit .360 and led the league with 30 doubles, finished second to Cool Papa Bell in hits and second to Sam Bankhead in steals. The following season his .390 average beat out Hall of Famers Josh Gibson, Martin Dihigo, Cool Papa Bell, Willie Wells and Ray Dandridge for the batting crown. That winter Wright played for San Juan in the Puerto Rican Winter League. Again, playing against the best players outside the major Leagues, Wright was a standout, being named to the All-Star Team and hitting the home run that put his team ahead in game one of the two-game series.

Due to the war and draft regulations, Wright returned to the United States for the 1942 season. Having an off-year, he barely managed .300 as the Elites lost the second-half pennant in the last weekend of the season. Wright was off to Mexico again in 1943 where he won the Triple Crown and stayed the following season as well. He was back in Baltimore for the 1945 season where he finished second in the batting championship. This would be Wright’s last season in America.

In interviews he gave after his retirement, Wright stated that he preferred the absence of racial animosity in Mexico. South of the border he was an acknowledged star, while in his own country, no matter how good he was, he was only a marginal figure, known only by those who followed segregated baseball. Besides, life was easy for a ballplayer in Mexico. Unlike the Negro Leagues where playing two games in different towns on the same day was not unheard of, the Liga Mexicana played only on Friday, Saturday and Sundays. The travel was by train or airplane, a world apart from the bone-rattling bus rides that were the normal mode of transport in the Negro Leagues. Age also has something to do with Wright’s decision to stay in Mexico.

When Jackie Robinson integrated organized baseball in 1946, Wright was 32, too old to be seriously considered for a shot at the majors. This, combined with the quick collapse of the Negro Leagues after 1946, kept Wild Bill Wright in Mexico. The Mexican League had one last great season, 1946, when not only Negro League players, but also white big leaguers, ventured south. In what can be called his last hurrah, Wild Bill outhit all the white major league imports. He played through 1951, then opened a restaurant with his Hawaiian-born wife in Aguascalientes. Called “Bill Wright’s Dugout,” the restaurant capitalized on the familiarity of his name to Mexican sports fans. Wright raised his family in Aguascalientes, venturing back to the States only later in life to attend Negro League reunions. For his contribution to Mexican baseball, Wright was elected to the Mexico’s Salon de la Fama in 1982.

So that’s the story of Wild Bill. It’s always bothered me that not only was this fine athlete denied the big league career his skills surely merited, but he’s not even widely known today because the same mindless racism that kept him from the majors also forced him to move to another country where he played out his career in relative obscurity. While his contemporaries who played the bulk of their career in the U.S. have belatedly received the recognition they deserved, Wright, despite his statistics, remains a largely forgotten figure. I think it’s fair to say that it is his time spent alternating between the Negro and Mexican Leagues that hindered any late recognition of his career and rendered analysis of his talent difficult. I’d always wanted to do a story and illustration of Bill Wright, but it wasn’t until I was at a book signing in Tennessee last summer that I put Wild Bill on the front burner. Among the people who turned out for the event was a nice group of Knoxville SABR members. One of the fellas struck up a conversation about Wild Bill Wright which, of course, peaked my interest. Turns out he was part of movement to get Wright elected to the Tennessee Sports Hall of Fame. Unfortunately, at the time, Bill Wright has not been elected to this organization. No doubt his career spent in the shadows of baseball history has everything to do with this hometown oversight. Fortunately, within a few years, some hard work and campaigning (I’m proud to say my baseball card of Wright was part of the presentation) by local baseball historians saw Wild Bill’s appointment to the Tennessee Sports Hall of Fame.