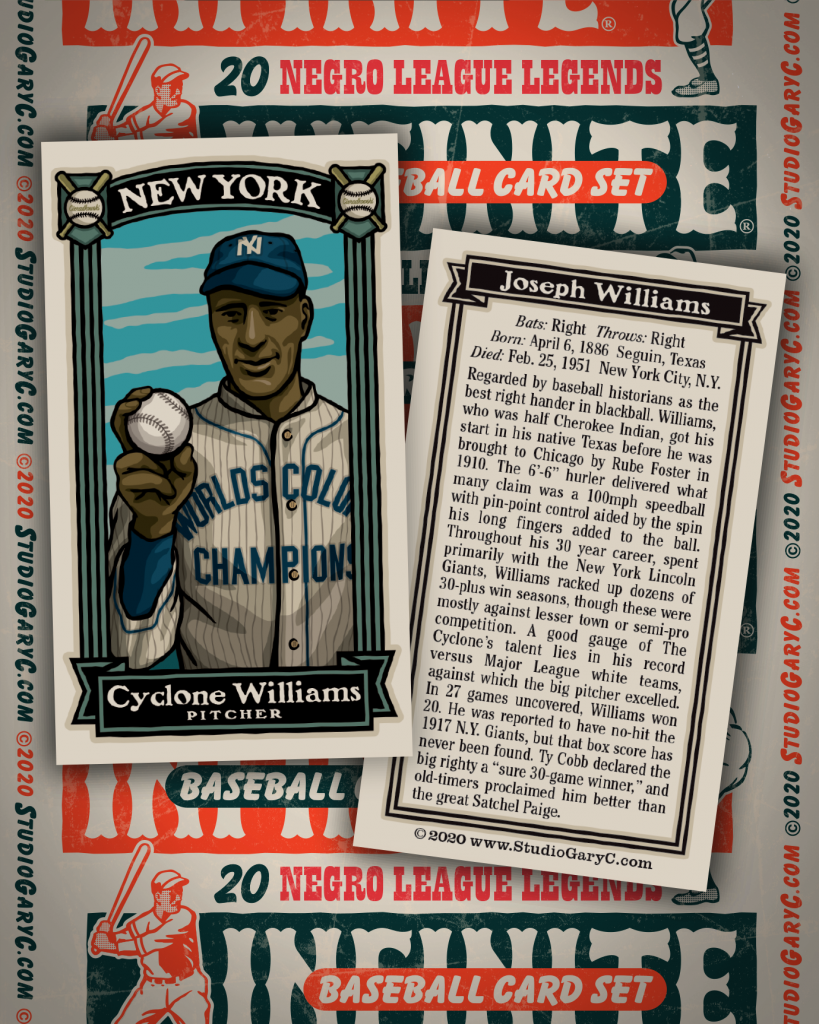 While Satchel Paige is usually referenced as the finest pitcher Blackball produced, many fans and sportswriters alike who witnessed both Paige and the man known as Cyclone Joe Williams pick the latter as the best. The two have much in common, both possessed blinding speed coupled with pinpoint control and excelled when pitching against white big leaguers. Both men had careers spanning in excess of over 30 years around which Paul Bunyan-esque legends have been spun. Looking at Cyclone Williams the astonishing part is that much of it is true.

The Cyclone blew out of Texas in the early years of the 20th century, first by word of mouth spread by traveling Blackball teams that encountered him. In 1910 he moved north to Chicago where he received real news coverage pitching on quality ball clubs. From the start he was a combination of mystery and awe. He was a giant of a man, about 6’-4” just under 200lbs, lean like you’d picture a Texas cowboy, his half Black-half Comanche Indian heritage giving him a strikingly exotic appearance. He was quiet, didn’t talk much, but exuded a confidence that his fastball backed up.

Williams threw the ball with a phenomenal speed that many guess to have been in the 100mph range. The sheer velocity at which he unleashed a baseball was aided by the way it rolled off his inhumanly-long fingers, giving the sphere an added break as it approached the plate. In the days before radar guns, the only way to gauge a pitchers velocity was by comparison to other hurlers. Veterans often put Cyclone Joe in the same category as contemporaries Walter Johnson and Joe Wood, white baseball’s hardest and fastest. Like Walter Johnson and Satchel Paige, opponents invariably commented on his pinpoint accuracy. When a man batted against The Cyclone he didn’t have to be worried about getting plugged by a pitch – he just couldn’t hit it.

Williams was known for his strikeouts – The Cyclone Joe legend passed down in oral histories have him repeatedly pitching games of 20 or more punch-outs. Granted, many of the feats that have become part of the Blackball canon were against semi-pro or amateur clubs. In The Cyclone’s case however, he went head-to-head against actual Major League teams in 11 documented games and won an astonishing 6 times (plus one 1-1 tie). We’re talking pitching match-ups that featured Williams against the mighty New York Giants and Philadelphia Phillies when they were pennant winners, and the four games he did lose were by 2 runs or less. Against all-star teams made up of a mixture of white major and minor leaguers, The Cyclone won 15 out of 19 games. The big Texan hung losses on Walter Johnson, Chief Bender, Waite Hoyt and Rube Marquard, all future Hall of Famers. One of the most tantalizing stories that make up the Cyclone Williams legend is a 1917 game in which he no-hit the pennant winning New York Giants for 10 innings before losing 1-0 on an error. Though many players have claimed to have taken part and fans recalled the game, no box score or newspaper account has ever surfaced. Something tangible from that lost afternoon would be an important find to say the least, but we do have those other games. You can’t measure Williams’ talent any better way than that; except if his career was spent in the majors, which of course he was denied.

After he walked off the mound for the last time in 1932, The Cyclone strapped on an apron and became a popular New York City bartender. Before his death in 1951, a whole new generation of Negro Leaguers had benefited from The Cyclone’s career-changing advice dispensed over a few beers. The following year the Pittsburgh Courier asked ballplayers and sportswriters who was the best Negro Leagues pitcher: The Cyclone beat Satchel, 20-19.