Growing up in North Jersey, one of my earliest memories are of newspapers, or, in Jerseyese: “the papers.” “The papers” meant three specific newspapers: The Newark Star-Ledger, New York Daily News and The New York Post. As a Mets fan, my first paper of choice was the Daily News because the Ledger and The Post were  “Yankee Papers.” See, The Daily News, while severely lacking in the pound for pound sports writing talent of The Post and to a lesser extent, the Ledger, none-the-less spent more ink on my Mets. So that was my first go-to read if I wanted the complete inning by inning recap of the previous night’s Mets loss.

However, when it came down to reading just damn good and hard-hitting sports writing, I went for The Post. Hell, I still do. Even though I moved away from Jersey more than three decades ago, I have habitually read The Post every single day, whether in an over-priced “imported” edition from a Los Angeles newsstand or today as an online subscription on my tablet. I’ve lived all over the country, and as far as I’m concerned, no one paper had better sports coverage than The Post.

And, of all the great writers and columnists that have written under The Post’s banner, my favorite was, and still is Phil Mushnick. There are thousands of sports writers who are called “hard-hitting,” “controversial” and “out-spoken,” but none have been able to back it up with the facts and common sense more than Mushnick, or “Mush” as my Pop and I reverently called him. In the years after I left Jersey, I would talk several times a week with my Pop. Mostly we’d talk about sports; boxing and hockey, but mostly baseball. If it were possible to go back over 25 years of phone calls between the two of us, I bet the most often uttered phrases in our conversations was “in Mushnick’s column this morning…” I’m sure my Pop and I weren’t unique – I’d bet my bottom dollar that there are thousands, if not millions of fathers and sons in the Metropolitan area whose conversations have shared that same exact phase.


Frankly, without looking it up, I’m not sure when Phil Mushnick began his career at The Post, but his byline’s been a fixture in the sports section for as long as I can remember. That’s why it was a shock and incredible honor to this Jersey Boy and lifetime New York Post reader to find that Phil Muchnick mentioned my work in his Sunday column this past week. Not only did Mushnick give my work a thumbs-up, but he also had the online edition prominently feature my Joe DiMaggio illustration and direct link to my Infinite Baseball Card Set Blog. 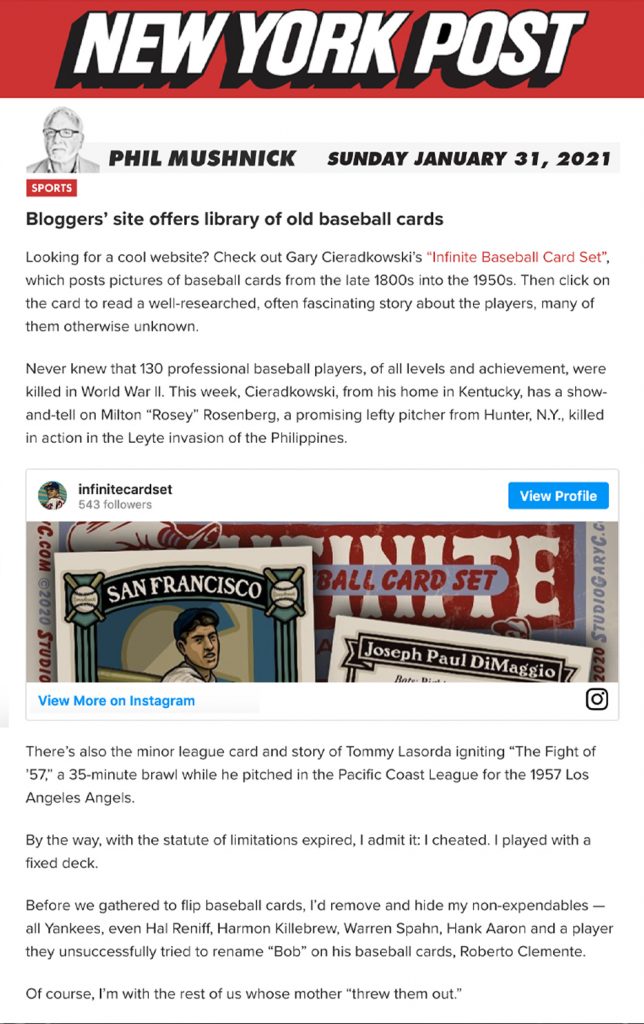 And, as great as that was, to a hard-copy newspaper junkie who enjoys the smell of fresh ink on his fingers, this next part was even better: 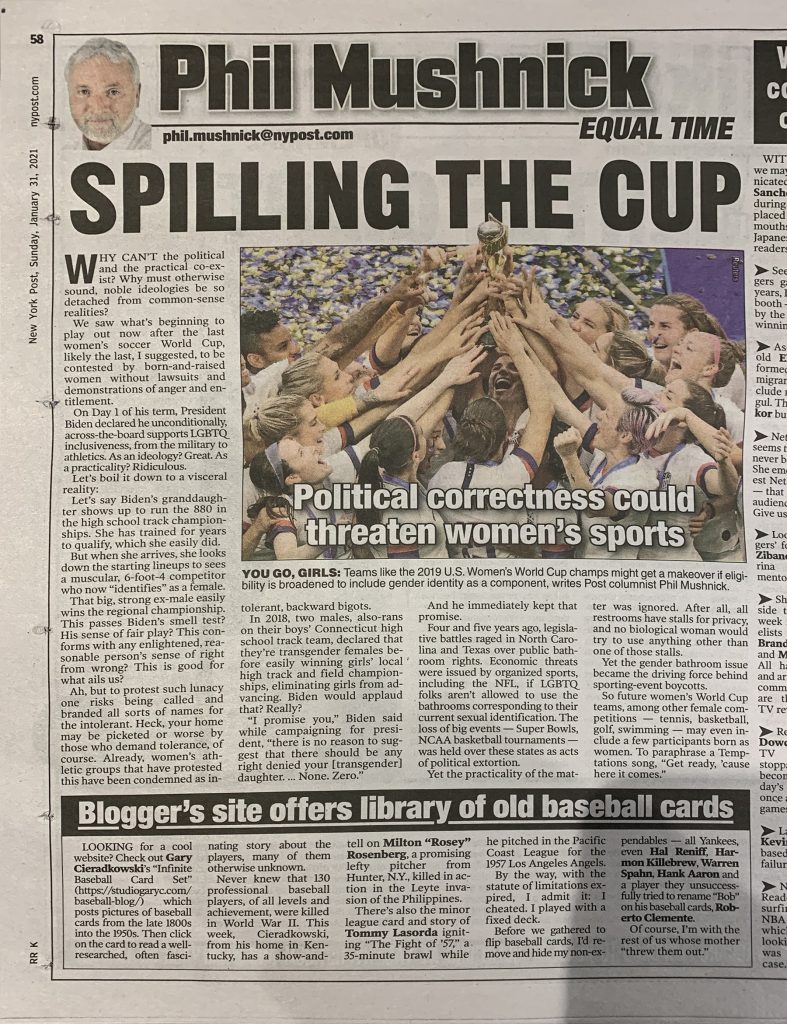 (Photo courtesy of my Uncle Ed back in Jersey)

Yeah, Phil Mushnick’s Sunday column is a full page, and my part below his main feature is in large headline type – the size usually reserved for stories about hero cops, liquor store stick-ups in Canarsie and NY Rangers game results. Seriously, I can’t tell you how fortunate I felt when I saw my work in Phil’s column. To be written about by my favorite sports writer in my favorite newspaper is, well, indescribable.

If I could only ask only one thing, it would be that my Pops was still around so I could share it with him. I could see myself not saying word as the Old Man sipped his coffee regular (that’s another Jerseyese for coffee with cream and sugar) and make his way through the The Post’s sports section. Then, upon reaching Mushnick’s page, read down the columns until he hits upon his son’s name. I couldn’t even begin to tell you what his reaction would be, but I’d give anything to see it.


On second thought, I bet my Pop did see the column this past Sunday, up there, in heaven. Call me crazy, but I’m pretty sure they got a newsstand on the corner that stocks The Post and all “the papers”…

Thank you Phil Mushnick, The New York Post, and most of all, every one of you who has followed my blog and work throughout the years. Without your support and friendship, seeing The Infinite Baseball Card Set in Mushnick’s Sunday Post column would have remained just a daydreamed fantasy in my mind.

3 thoughts on “Infinite Baseball Card Set Made the NY Post!”