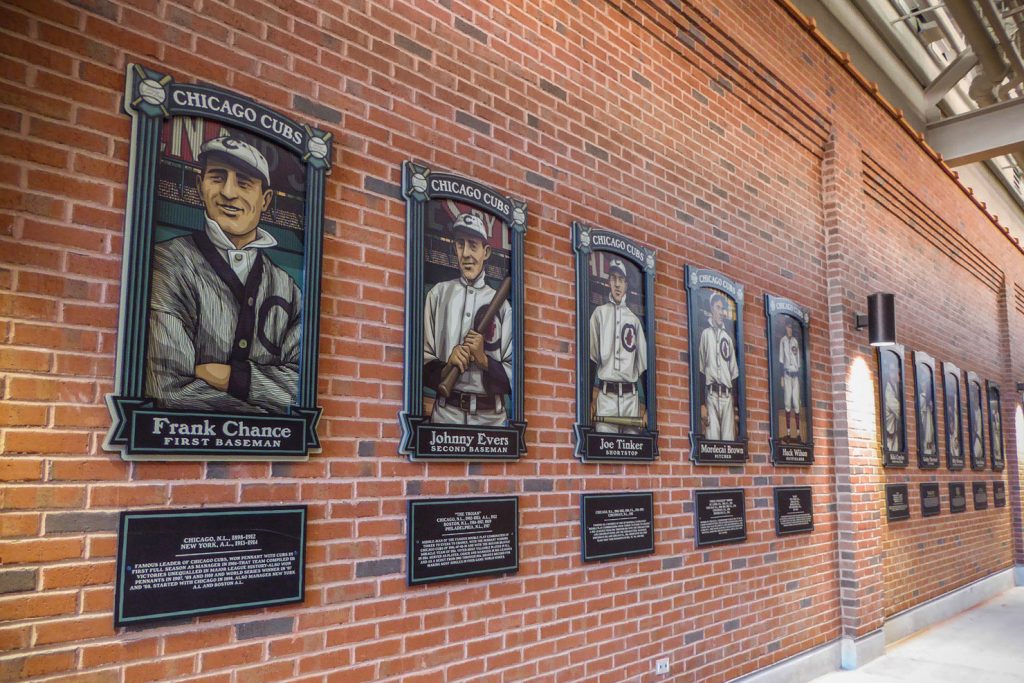 In 2016 I was invited to bring my passion for depicting the game into the friendly confines of Wrigley Field, where my five foot tall portraits of Cubs greats will be on permanent display in the newly renovated bleacher section. From the famed “Tinker to Evers to Chance” double play combo of the early 1900’s through to the Cubs newest Hall of Famer, Lee Smith, the illustrations span over a century of Chicago Cubs history. Intricate details such as the little brown cubbie bear on the 1908 uniforms and the hand written number “14” on the knob of Ernie Banks’ bat bring these five foot tall masterpieces to life.

As proud as I am about having my work in what’s probably the greatest ballpark in existence, I haven’t had the chance to see then in real life. It seems like every time I try to plan a weekend in Chicago something comes up. Chicago was always one of my favorite places that I’ve lived, and it kills me that I haven’t been back in years to see my old pals and catch a few ballgames. Maybe this summer will be different, and I’ll finally make it back to Ashland and Addison, but until that time comes, I’ve had to view my work through the lens of friends and colleagues who have been to Wrigley and taken pictures for me. 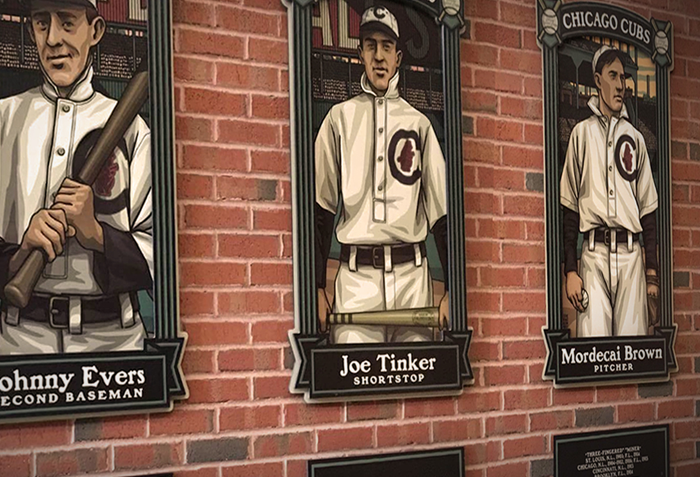 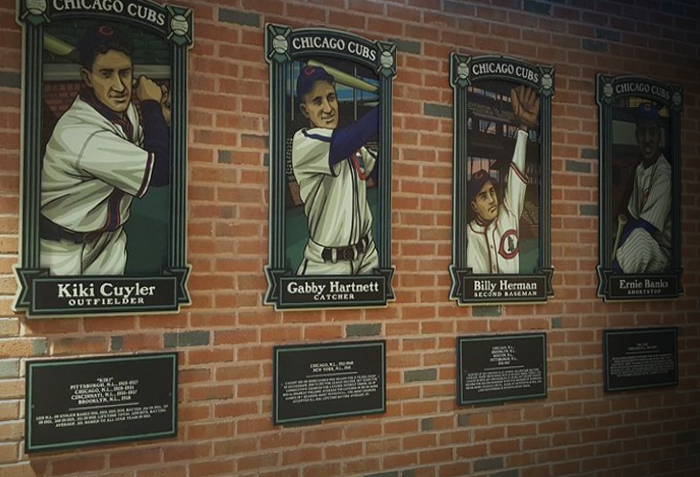 As welcome as these snaps are, I longed to see these things up close and personal. Then, out of the blue, a unique opportunity came about.

Right at the beginning of this lousy pandemic, I got a call out of the blue from a guy in Indiana who recently purchased one of the Cubs portraits at an auction. Since the Cubs hadn’t removed any of the portraits, this one had to have been at worst fraudulently made by the fabricator who made the originals or a test/rejected piece at best. I called the auction house to find out where they acquired it, but after a few evasive conversations they stopped returning my calls. I notified the Chicago Cubs and Yount Design (who hired me for the job) to notify them of the existence of at least one extra copy of the portraits. Beyond that, I couldn’t do anything else about it.

But back to the guy who bought it. He was a huge Cubs and Ron Santo fan, and since this was the Santo portrait that was made for Wrigley Field, it was the best of both worlds for him. He and his wife were heading down south to visit a son in the military and since their route took them through my part of Kentucky, asked if they could stop by so I can sign it for them. I of course agreed and a date was set. Then the lock downs started and the meeting was cancelled.

Finally, just before Christmas he and his wife planned another trip and we set up a time to meet. This time it was a success, and early one morning I got to see one of my Cubs portraits in real life. The fabricator did a fantastic job and the 3-d frame looked real nice. 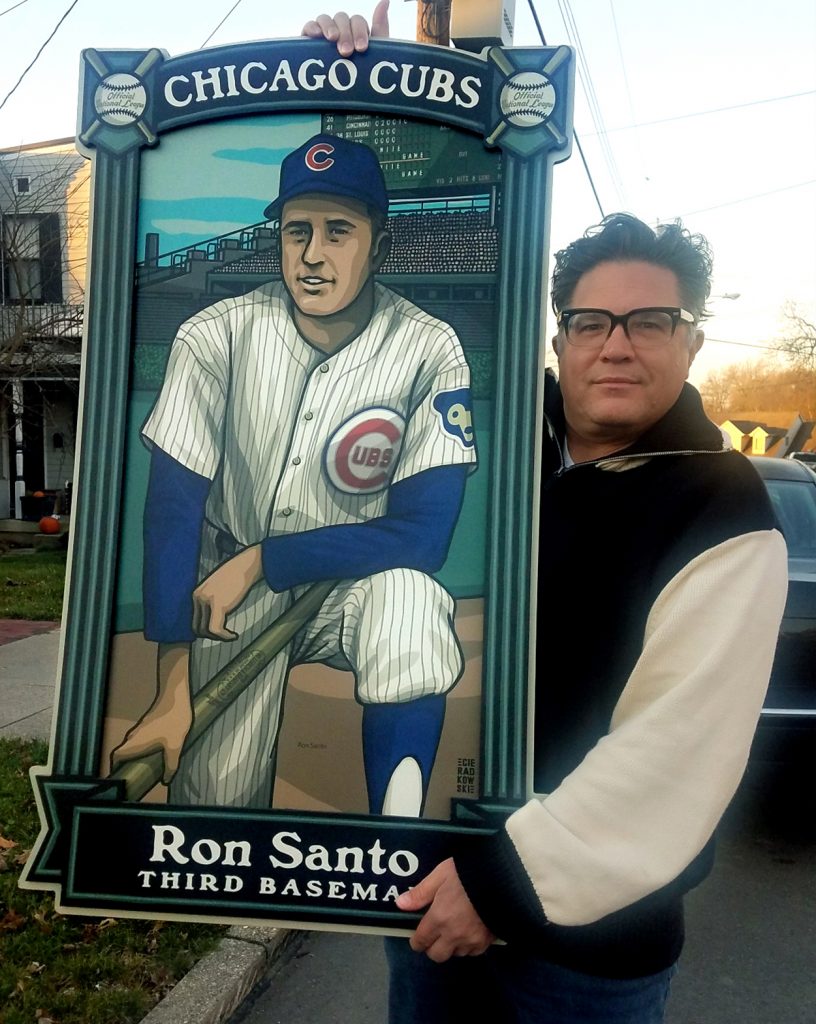 I signed the bottom in black Sharpie. 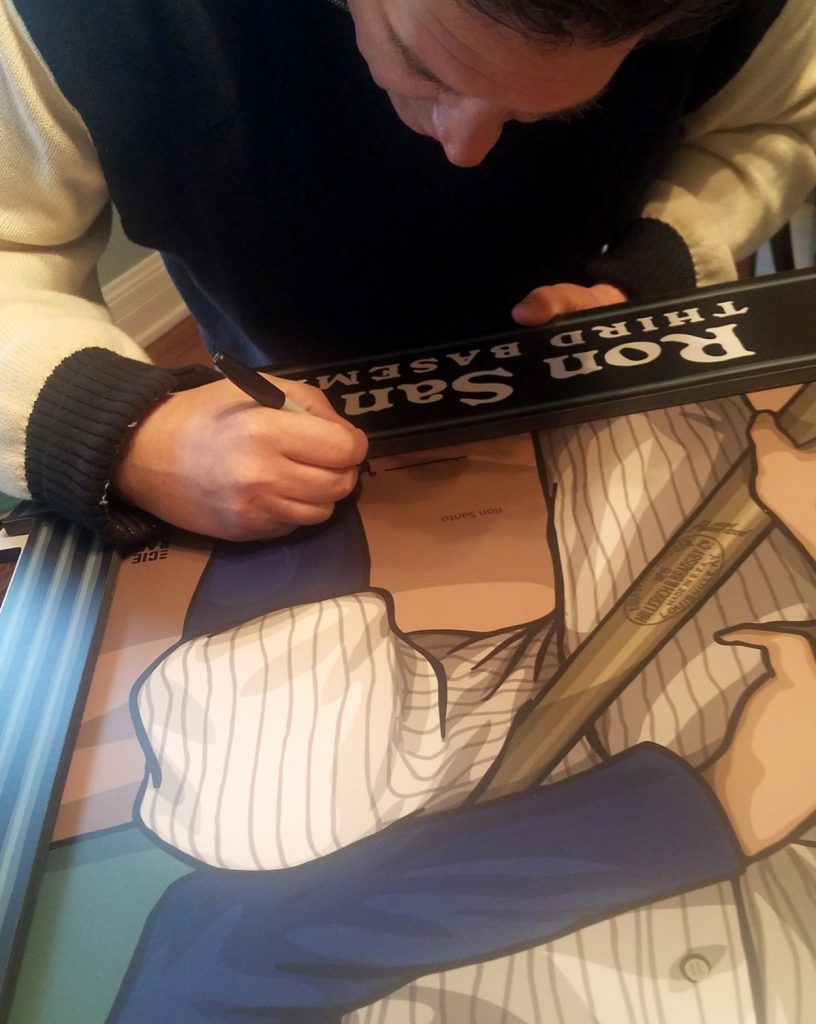 Upon closer inspection it appeared that this was indeed a test or mistake piece because the colors are a bit off and there is some random type that says “Ron Santo” printed between the legs. That made me feel a little better knowing that someone wasn’t fraudulently producing these pieces which were custom made for Wrigley Field. 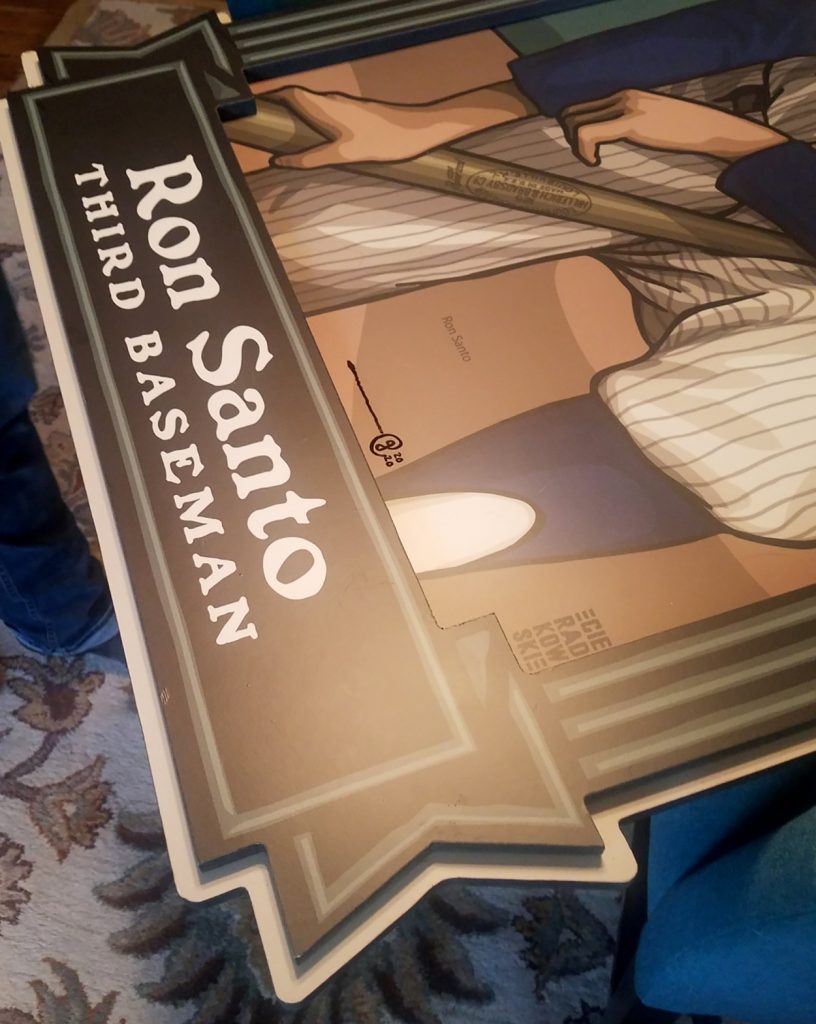 I’ll end with this video from last summer’s dedication of Lee Smith’s portrait at Wrigley Field. You can see the size and shapes of the originals.

2 thoughts on “An old friend from Wrigley Field”