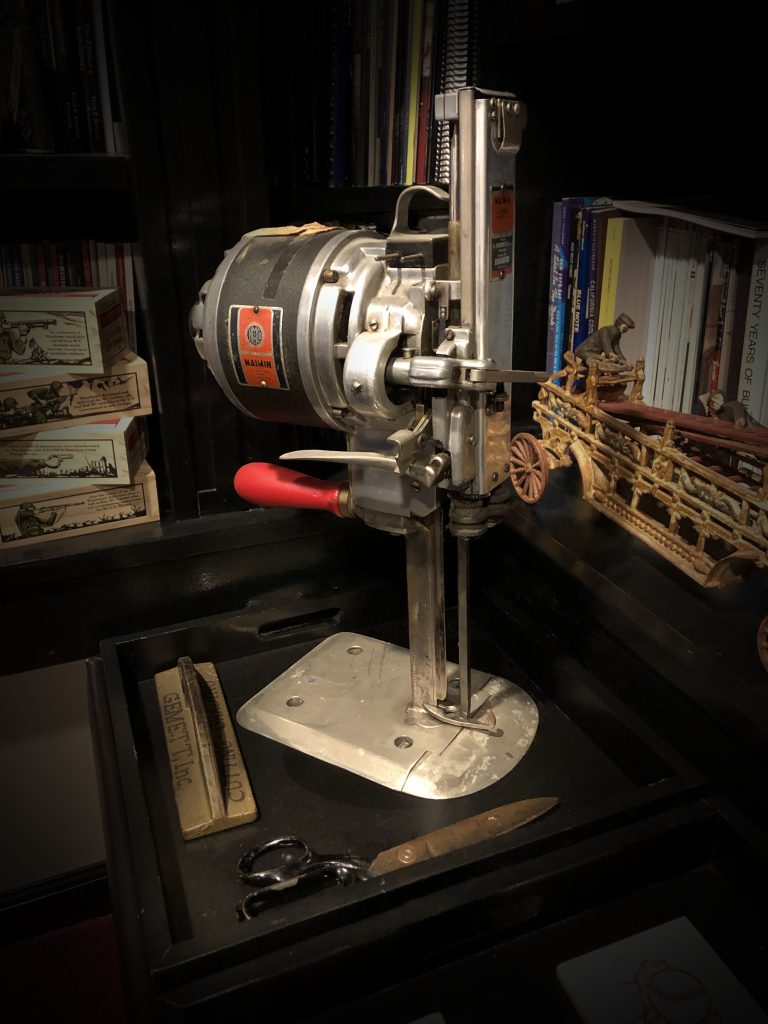 You may or may not know that I come from a garment family. My father was a master cutter, a trade he began when he was a teenager and would continue to do until literally the very moment he passed away – seriously, he had an aneurysm right there on the shop floor between the long cutting tables. I worked in the garment industry during weekends, summers and breaks from school, sometimes beside my Pop and at other times for rival garment shops. It wasn’t a profession I wanted to pursue; the sweltering cutting rooms, criminally corrupt unions and the constant threat of having fingers cut off wasn’t to my liking. But what my time in the garment industry did was make me do everything I could to get a scholarship to art school so I did not have to return to the shops again. And it also instilled in me an appreciation for fabrics and garment construction.

I guess it was only inevitable that I would find myself designing apparel. The first things I designed were hand drawn t-shirts of my favorite bands. I didn’t have much disposable income growing up so buying store-bought t’s was out of the question. Besides, most of the bands I listened to were new wave and punk – back then you couldn’t buy those kinds of band shirts in the mall. So I made them myself. The local Army-Navy stores had cheap plain t-shirts and I’d paint all kinds of shirts up for me and my friends. Can’t find a Buzzcocks, Replacements or Wire t-shirt? Gary C. can make one for you! It actually turned into a nice little industry for me and I eventually branched out into painting the back of jean jackets and leather jackets. The local burnouts were my best patrons and I painted countless Led Zeppelin and Jimi Hendrix originals throughout my high school years. All the cash I made went towards my dream of going to art school, and I probably got a year or two worth of canvas and oil paints out of it. The crowning moment of my DIY band shirt career was when I was stopped in the lobby of Radio City Music Hall by Ray Manzarek, former keyboardist of The Doors, who complimented the shirt I was wearing and asked me where I got it. He couldn’t believe it when I said I did it myself.

Flash forward a couple of decades and you me still designing t-shirts, but instead of obscure punk bands I do obscure baseball teams. I first began doing shirts for Jerry Cohen at Ebbets Field Flannels about 10 years ago. I’m proud to say that many of the ones I’ve done are still for sale and sell out regularly. I’ve even gotten emails from people who “collect” and avidly follow the shirts I do for Ebbets – that’s a true compliment! 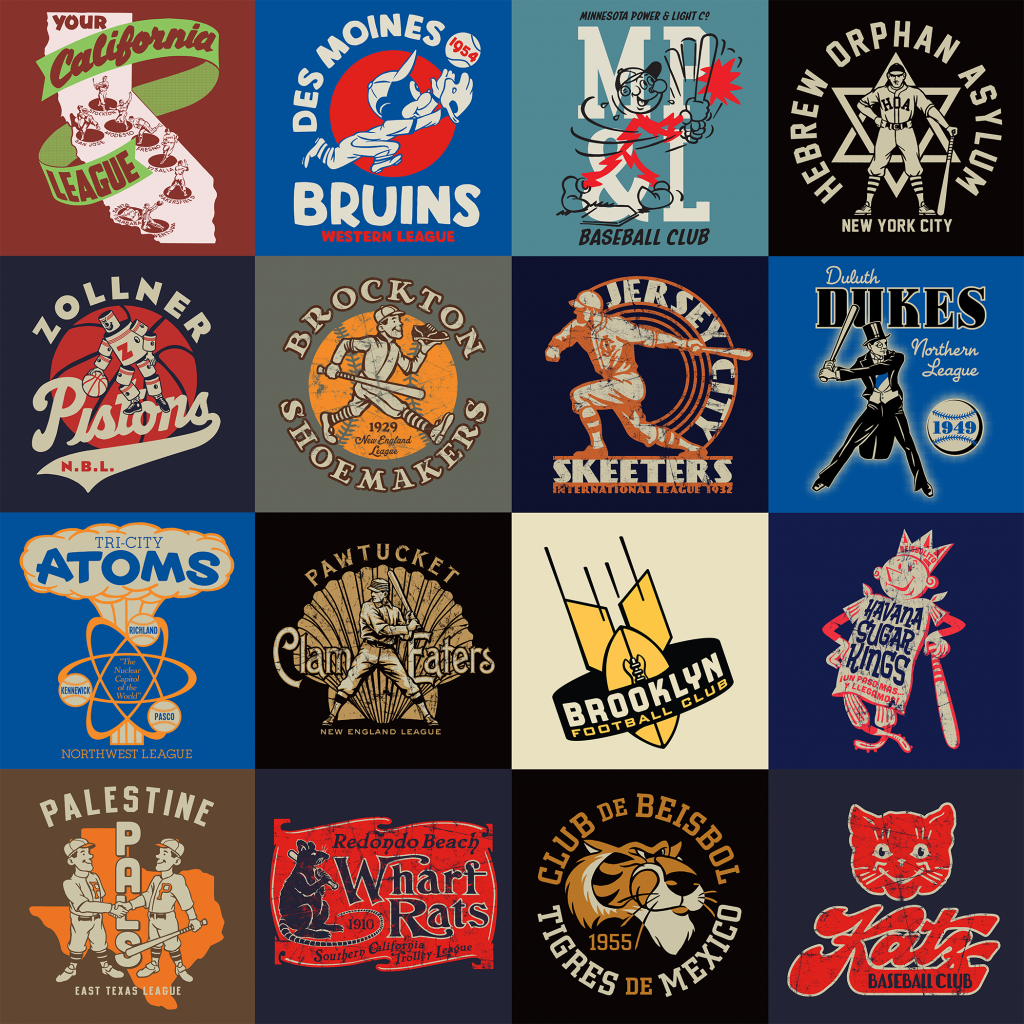 In addition to my work for Ebbets, over the past several years I’ve worked closely with TeamBrown. TeamBrown has the licensing for the Negro Leagues and All-American Girls Professional Baseball League. I’ve done a line of Negro National League shirts (which I unabashedly believe are THE BEST Negro League team shirts ever done) and an ongoing AAGPBL line that will eventually have all the teams represented. Both of those lines, I’m proud to say, can be found in the Smithsonian and National Baseball Hall of Fame gift shops. It’s not like having a painting hanging in the Met, but for a former garment man, it’s as close as you can get. 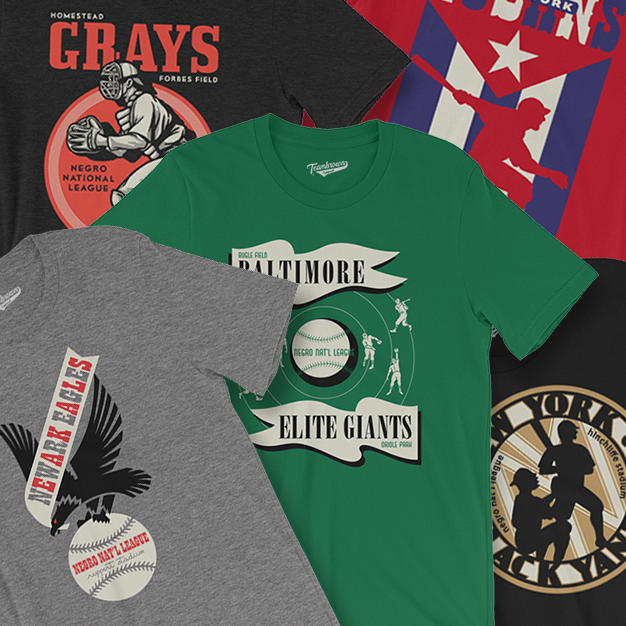 MLB’s recent “promotion” of seven Negro Leagues to “major league” status led Rob Brown, head man at TeamBrown, to contact me about doing a line to mark the occasion. Instead of doing a single design that incorporated all seven leagues, I thought an individual design for each league would be better. The line, called “Major League 7,” was released on Opening Day. Unlike my Ebbets designs which are only available on men’s t-shirts, TeamBrown offers women’s and kid’s sizes as well as hoodies and long sleeve shirts. Heck, you can even get my designs on a coffee cup (I’m actually drinking my coffee from a Baltimore Elite Giants mug as I write this). So, without further ado or boring stories about my time in sweatshops, here is my Major League 7… 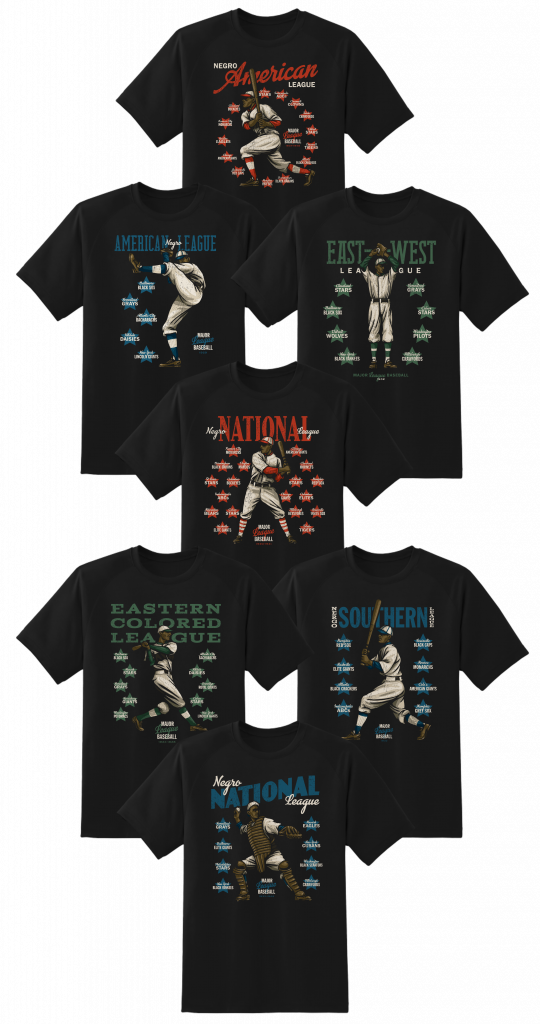 BREAKING NEWS! Just heard from Rob Brown that the Baseball Hall of Fame in Cooperstown will be selling this line in the gift shop!

4 thoughts on “The 7 Major Leagues”