Today I’m introducing a new component of The Infinite Baseball Card Set. SHORT STOPS will be a place where I can share illustrations I’ve done that do not come with a long format story, just a small story about a big character. This will allow me to fill the sometimes month-long gaps while I’m researching and writing my longer stories and introduce players who, while interesting, don’t need a full-blown treatment. I hope you enjoy this new feature, and please let me know what you think of it.

One of my favorite teams to study are the Cincinnati Reds of the 1935-1945 period. During this time the Reds were trying to rebuild after their tainted 1919 World Series victory. Though they had some good teams in the early 1920s, The New York Giants always seemed to beat them out. Being a small market, the Reds didn’t have the cash resources that the Giants had nor the farm system the Cardinals boasted. Plus, their biggest star, Edd Roush, staged long hold outs over his contract that often stretched into the first month of the season. His absence from the Reds lineup likely cost the Reds the 1922 and 1923 pennants as they finished in second place both those years. The Reds sank into a second division team after this and the start of the Great Depression in 1929 sent the team into a further nose dive.

Things began to slowly change for the better when Larry McPhail was brought in as the club’s General Manager. He freshened up the old ballpark, convinced millionaire Powel Crosley to buy the team and introduced night baseball to the majors. McPhail spent Crosley’s money wisely and the Reds soon developed a decent farm system, replacing former stars like Babe Herman and Kiki Cuyler with homegrown players. This began paying off with a close 4th place finish in 1938 and finally with back to back pennants in 1939-40 and a World Championship in 1940.
One of the only players that bridged the eras of the lousy and great Reds of the 1930s was starting pitcher Paul Derringer. This guy has to be one of the top players in any discussion of the “Hall of Very Good” category.
Not many pitchers in baseball have had the dramatic highs and lows that Paul Derringer’s career had. As a rookie he won 18 games for the pennant-bound Cardinals in 1931, but upon being dealt to Cincinnati in 1933 lost 27 games. Toiling for terrible Reds teams, Derringer lost 21 games the next year, but then almost single-handedly dragged the Reds out of the cellar, winning 154 games from 1935 to 1942. The 6-time All-Star annually finished near the top in strikeouts, complete games and ERA while his pin-point control meant he averaged just one walk per game. His excellent 25-7 record in 1939 led the Reds to their first pennant since 1919 and his .781 winning percentage led all NL pitchers. He won 20 games in the team’s 1940 World Championship season and was the victor in both Game 4 and 7 in the World Series. Derringer was the winning pitcher in the first MLB night game in 1935 and pitched two 1-hitters in 1940. Among Reds pitchers he ranks 3rd in career wins and innings pitched, and 9th in career strikeouts.
I knew I wanted to do a card of Paul Derringer, but the problem I faced was what period did I want to depict him? I couldn’t decide whether to show him at the beginning of his Reds career when he lost a stunning 27 games in 1933, 1935 when he was the starting pitcher in the first night game in MLB history, or 1941 when he was the ace on the defending NL Champs. As you can see, I settled on the latter for the main illustration in this story. But, I really like the 1933 version as well.
What’s the difference, you ask? Well, there’s a few. First of all, the uniform, cap and stirrups are. One interesting thing I found when illustrating the 1935 version is that the stirrups depicted in Marc Okkonen’s Baseball Uniforms of The 20th Century are wrong. That’s not a knock on Okkonen’s work – his book was and still is the best ever published on sports uniforms – especially when you consider that he completed it before computers and digital newspaper resources. It was a simple oversight on his part that takes nothing away from his seminal work. But anyway, when I did my drawing, I wanted to get the details right.
And that leads me to the other major difference between the 1933, 1935 and 1941 drawings: the background. Redland Field (Crosley Field after Powel Crosley bought the team in 1934) underwent a major renovation between 1933 and 1941 and the outfield scoreboard and advertising was wildly different in those years. Look closely and you can see the differences. I especially like the gradual evolution into the iconic clock and scoreboard you see in the 1941 version – how awesome is that Art Deco/Art Moderne clock and trim? I sure wish the Reds had something like that today. 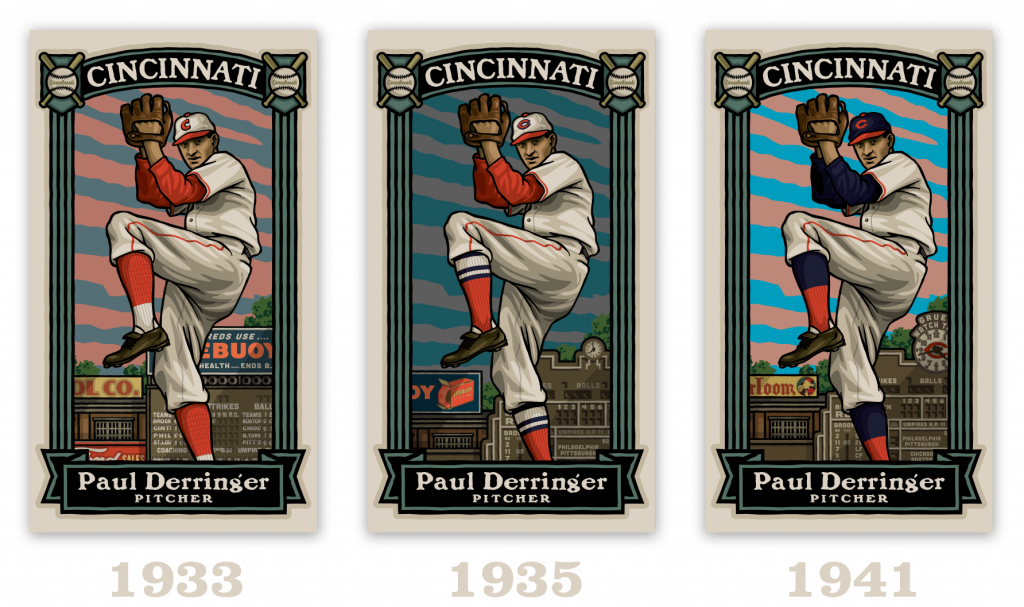 I hope you enjoyed the first of my SHORTSTOPS stories. Let me know what you think in the comments below…