CLAD IN THEIR muddy olive drab tunics and tin helmets it was hard to distinguish one Yank from another. The men of Company E, 315th Infantry Regiment went through the motions of readying themselves for the assault on Hill 378 – checking their gas masks, adjusting ammo belts and tucking a hastily written note with their name and address back home into their tunic pocket, just in case the morning’s battle went bad. On closer inspection, not all of the Yanks looked the same – one had the tell-tale red hair and freckles of an Irishman, another the smooth olive skin of an Italian. And then there was the burly one with the sergeant stripes on his sleeve – he had the unmistakable features of a Chinese man.

His name was Sergeant Apau Kau, but most of the men in his squad called him Sam. In the bloody trenches of Verdun, military niceties were often jettisoned in favor of some kind of familiarity, and Company E’s respect for Sergeant Kau’s leadership led his boys to calling him Sam, like they would an older brother.

When Sam took out his bayonet, wiped it on his breeches and fixed it to the end of his rifle, the boys next to him did the same. Sam was a pro – a real soldier, and his presence made the boys in his squad feel safe as long as they did what he did.

The early morning fog drifted over the top of the trench, mixing with the smoke from the artillery barrage that pounded the German trenches. A lieutenant stormed down the trench, barking orders to make ready, but the Company E boys just looked to Sam to follow what he did. When the barrage ceased, an eerie pause washed over the huddled Yanks – then all down the trench came the shrill whine of the officer’s whistles ordering the men over the top. Sergeant Kau – Sam – grasped his rifle in one big hand and grabbed the ladder rail with the other, pulling himself up over the lip of the trench and into the open. He paused to yell to his boys – no one remembers what – then turned to charge the German trench. Somewhere in no man’s land a bullet found Sergeant Kau, his body falling in the mud, once again all but indistinguishable from all the other dead Yanks that lay in that horrible field of Verdun soil.

IN ANOTHER LIFE, thousands of miles away from Verdun, Sergeant Kau was known to the thousands of fans who cheered him on every summer as Apau Kau: Spitball Ace of the Chinese Travelers.

Apau Kau was born in Kohala, Hawaii in 1890 to Chinese immigrants. The Kau family grew to include four boys and three girls by the time their father died in 1897. Four years later their mother Loy moved the brood over to Oahu and settled in Honolulu. Apau was soon known by the more American “Sam,” and began distinguishing himself on the local baseball diamonds.

Despite being widowed, Loy Kau made it her goal in life to give all her children the best education she could manage. Starting out at the prestigious Royal School, three of her boys each branched out into an upper middle class vocation: Edward studied medicine in China and then graduated from Harvard Medical School, En You became one of the first Chinese-Americans to become a Honolulu police officer, and En Sang studied bookkeeping and became a CPA. Sam became a ballplayer.

As a teenager Sam honed his skills in the highly competitive Oahu semi-pro leagues. This was around 1910 and the island was a hotbed of baseball talent. The Army and Navy bases on the island brought a constant flow of top-notch ballplayers to the island, including Bullet Joe Rogan and his 25th Infantry Wreckers team – many of whom would go on to form the nucleus of the famed Kansas City Monarchs. The island was a favorite destination for touring ballclubs as well, with college nines from Japan making appearances every year and major league all-star teams from the mainland making the trip every couple winters.

In this competitive environment Sam developed a demon spitball. Along with shine balls, mud balls and cutting the ball, the wet pitch was legal at this time and Sam used it to its full advantage. Usually unpredictable, Sam was blessed with pinpoint control, which when applied to his spitter and dry curve, made him one of the best hurlers in Honolulu. For a time he was considered by many to be a better pitcher than future Hall of Famer Bullet Joe Rogan; when various Honolulu sportswriter picked their Hawaiian Island all-star team Sam Kau was given the nod as pitcher on some ballots and Rogan given second or third base.

WITH HIS REPUTATION as the premier spitballer on the island, Kau was invited to take his show on the road with the All-Chinese Hawaiian Travelers. The Travelers were one of the many ethnic baseball barnstorming teams that were wildly popular at the time. While traveling Negro League teams like the All-Nations and Homestead Grays are well known, there were many other ethnic nines traveling the same circuit such as the Cuban Stars, all-woman Bloomers teams and the bearded ball players of the House of David religious colony in Michigan. The All-Chinese Hawaiian Travelers fit right in to this ethno-novelty traveling genre.

The heyday of the Hawaiian Travelers was 1912 to 1915. Touring the mainland U.S. every summer, the team played a demanding schedule against small town teams, big city factory clubs and college nines. Perhaps to elevate their status among ignorant mainlanders who might hold “Celestials” in low regard, the Travelers billed themselves as students at the Chinese University in Honolulu. As college students, the team was also able to tap into the lucrative university circuit, an avenue traditionally unavailable to other ethnic barnstorming teams. However, what no one in this pre-information age knew was that there was no “Chinese University,” and the ruse worked for as long as the team was in existence.

Besides Sam, the Travelers boasted several outstanding ballplayers that would go on to have careers in outsider baseball. Vernon Ayau was such an impressive shortstop that even the crusty New York Giants manager John McGraw was a fan. Ayau became the first Chinese-American to play in organized baseball when he was signed to play for the Seattle Giants. However, his time with Seattle was short-lived as players in the rest of the league circulated a petition expressing their unwillingness to play against a Chinese. His play suffered and he was dropped from the club. He briefly played for Tacoma before the league collapsed. Ayau wound up on the east coast, served in World War I and played semi-pro ball well into the 1920’s. Buck Lai was another extremely talented Traveler, playing in the New York Giants minor league farm system for a period before opting for a more lucrative gig with the Brooklyn Bushwicks, the New York Yankees of the semi-pros.

Sam Kau’s career with the Travelers lasted from 1912 to 1915. During that time Sam was made the team’s manager and spokesperson on the road. Besides pitching, Sam was noted for helping his teammates keep homesickness at bay by playing Hawaiian ditties on his ukulele.

After their summer tours concluded, the Travelers returned to Honolulu where they played against local and touring talent. In 1914 a team of big leaguers called the “All-Americans” arrived on the island on their way to the Orient. Kau pitched against the pros, losing 5-2. The big leaguers were impressed with his spitball and noted that four of their runs came during one bad inning. On the Travelers’ 1915 American tour, Kau held the minor league San Antonio Bronchos to 6 hits (though he lost 3-2 on poor fielding) and then tossed a perfect game against Baylor University, striking out 20.

At the conclusion of the 1915 tour, Kau moved permanently to Philadelphia where he continued to be a sought-after semi-pro pitcher. A former member of the Hawaiian National Guard (as were a good number of his teammates on the Travelers), Kau enlisted in the army in 1917. With his prior experience he made sergeant quickly and was sent to officer candidate school. Anxious to get to the fighting, the former spitballer voluntarily resigned from officer training in order to join his old regiment when it received orders to France.

Meanwhile, two of Sam’s other brothers were serving as well, Edward a Lieutenant in the Medical Corps and En You a sergeant in the infantry. The Honolulu newspapers made much of Loy Kau’s three boys serving Uncle Sam, featuring a two-column piece on the family in July of 1918. Four months later Sergeant Kau would be dead.

SAM’S PROMINENCE as a pre-war outsider baseball star made his death in battle news across the United States. Sam’s brother En Sang, who could not join up due to a deformation of his hand, told reporters, “While our grief is great, we are proud that in dying our brother gave his all for our country.”

This week’s story is Number 13 in a series of collectible booklets. 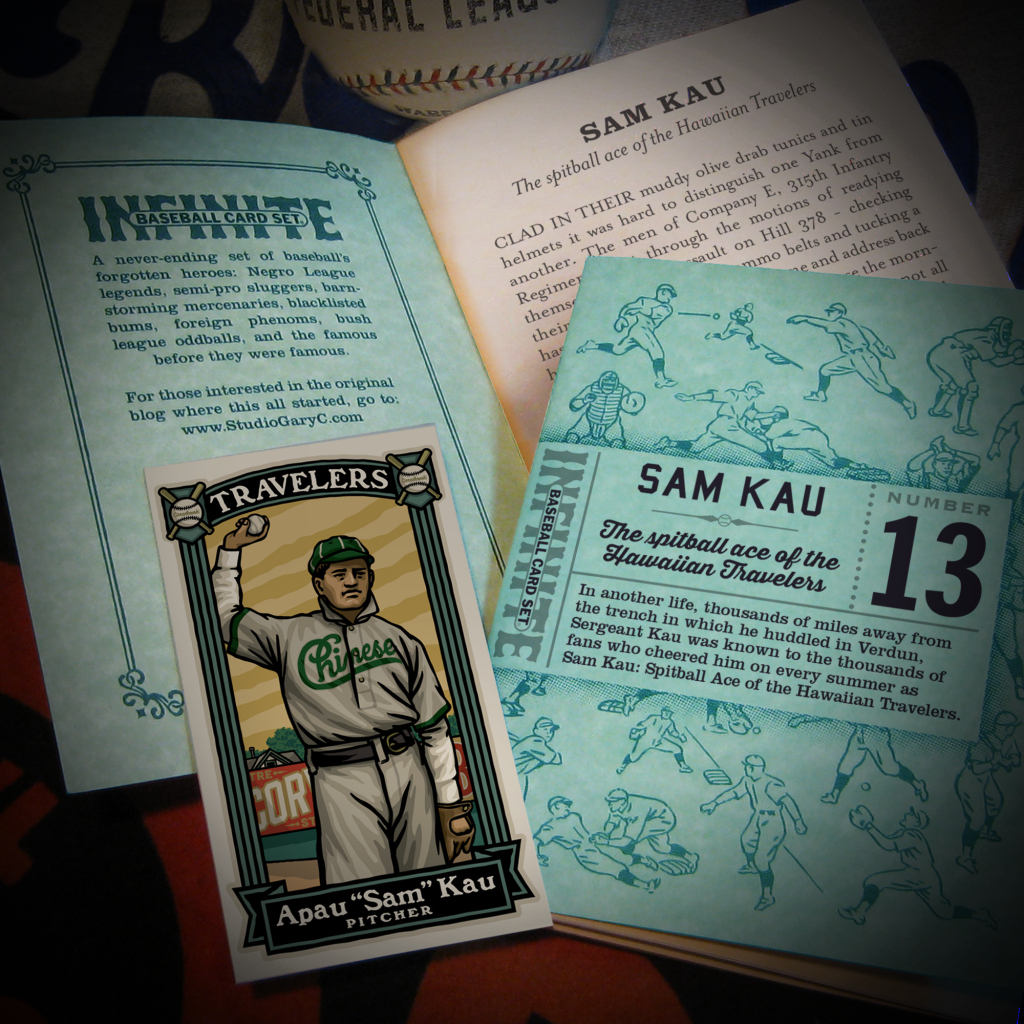 Each of the hand-numbered and signed 4 ¼” x 5 1/2″ booklets feature an 8 to 24 page story along with a colored art card attached to the inside back cover. These mini-books can be bought individually, thematically or collected as a never-ending set. In addition to the individual booklets, I envision there being themed sets, such as the series I did on Minor League Home Run Champions. I will also start a Subscription to the series as well. A year subscription includes a guaranteed regular 12 issues at a discounted price, plus at least one extra Subscriber Special Issue. Each subscription will begin with Booklet Number 006 and will be active through July of 2019. Booklets 1-5 can be purchased as a group, too.