They called him “Harvard Eddie.”

At a time when most ballplayers barely had a high school education, third baseman Eddie Grant, Harvard Class of 1909, was a member of the Massachusetts Bar, a full-fledged lawyer. He was also a darn good third baseman, batting .322 for Jersey City and leading the Eastern League during his first year in pro ball. The next season, 1907, Grant was called up to the Philadelphia Phillies. He quickly gained attention, not from his bat or fielding skills, but for what he would say on the field: when calling out his claim on a pop fly, instead of yelling the common “I GOT it!”, Harvard Eddie called out the proper phrase, “I HAVE it!” much to the amusement of his more modestly educated teammates.

During off seasons Grant returned to Boston to practice law, but each spring he took up baseball again. Traded to Cincinnati in 1911, he lost something at the plate and his batting average plummeted. The death of his wife after barely 9 months of marriage might have been the reason why. In 1913 the New York Giants picked Grant up and although he rode the bench more often than not, John McGraw took a liking to the scholarly third sacker and made him the Giants’ bench coach. As much as he loved the game, Grant disliked the life of a part-time coach and player and at the age of 32, retired to pursue his law career full-time.

The Great War had been raging in Europe for three years and many of Grant’s Harvard classmates were active participants even before the United States entered the war. Whether they drove ambulances for one of the volunteer organizations operating just behind the trenches or flew airplanes for the French in the Lafayette Flying Corps, college educated men of that era felt a sense of duty and adventure that sadly seems lacking these days. Once America entered the war in April of 1917, even more of these privileged men from wealthy families left their lucrative careers and easy lives to become officers in the rapidly expanding U.S. Army. Back then the Army assumed that a college educated man made a natural leader and “Harvard Eddie” was made Captain of Company H, 307th Infantry Regiment, 77th Division of the American Expeditionary Forces. After a period of training on Long Island with his men, Grant sailed for France in the summer of 1918.

The American Army was eager to prove itself to their Allies, France and Britain and the Meuse-Argonne Offensive was its chance. Launched on October 2nd, 1918, the Battle of the Argonne was one of the fiercest fights in American military history. The 77th Division charged into the Argonne Forest and strait into the solidly entrenched veteran German Army. It was during the confusing first day of the battle that Major Whittlesey, a New York attorney, got isolated and pinned down deep within the dense forest. Although forever known as “The Lost Battalion”, Whittlesey knew exactly where he and his men were, it was just that no one else in the U.S. Army did.

After a few anxious days, American aviators braved the dense German anti-aircraft fire and finally located Whittlesey and his battalion. Pilot Lieutenant Harold Goettler and his observer Lieutenant Erwin Bleckley volunteered to circle the forest with the idea that the place that did not fire back at them would be the location of the lost battalion. They were right, and after taking heavy fire which mortally wounded both men, their DH-4 aircraft crashed just short of the Allied lines. French soldiers rushed forward to help the downed aviators. Goettler was already dead but Bleckley, with his last dying breath pressed a bloody note into the hands of the closest French soldier. On it was a map showing the location of Whittlesey and his men! With this new information, Captain Eddie Grant and Company H were among the units rushed into the Argonne to rescue the Lost Battalion.

By the morning of October 5th, Eddie Grant and his men had been on the front line and in the thick of the fighting in the Argonne Forest for four days and nights. No one, most of all Captain Grant, had had any time for sleep. Being awake and constantly under enemy fire for more than 100 hours must have been a terrible feeling. Add on top of that the responsibility for the lives of the 150 men of his company and you can imagine the stress Grant must have been under. When they were finally taken out of the line the morning of October 5th for rest, a fellow officer described the captain as barely able to lift his arm to bring a cup of much needed coffee to his lips. But Grant’s reprieve was short-lived. The Lost Battalion had been found and someone had to rescue them. When orders to move-out came, Grant got to his feet and took his place at the head of his men.

He led them right back into the Argonne.

The Germans threw everything they had at the Americans rushing into the forest. If Whittlesey and his dwindling men could be captured or killed it would be a devastating blow to the upstart fresh Americans as well as their weary Allies. The story of the Lost Battalion had made newspapers all over the globe and its rescue would come as a giant shot in the arm to the young nation eager to prove itself to the world in the greatest war mankind had ever known. As the 307th Regiment marched forward, the German artillery pounded the road leading into the forest. Men and horses were torn to bits by the constant exploding shells, but still Captain Grant and the American Army moved forward through the hail of shrapnel.

Among the wounded being brought back past the advancing infantrymen was Major Jay, commander of Grant’s battalion. Recognizing Eddie, he waved him over. All the other ranking officers were either dead or wounded. Harvard Eddie was now in charge of the entire battalion.

Though it didn’t seem possible, the shelling intensified. The Germans were determined to destroy the Americans before they reached Whittlesey. The whole road had become a deathtrap, but everyone knew they had to move forward. Grant called his officers together to brief them on the situation. At that moment a shell exploded, tearing apart the two young lieutenants standing next to Eddie. Grant tried yelling over the screams and explosions for a stretcher bearer. Signaling his men to move off the road and waving his arms wildly in desperation for medics that never came, the next shell exploded directly on top of Harvard Eddie. He died instantly.

New York sportswriter Damon Runyon was a war correspondent in France during war and had known Eddie Grant well during his time with the Giants. He wrote a stirring eulogy for the former third baseman entitled Eddie Grant Sleeps In The Argonne Forest. The story was reprinted widely including in the 1919 Spalding Guide and Grant, the only major leaguer killed in the war, gained posthumous fame. In 1921 the New York Giants dedicated a plaque commemorating the former infielder and bench coach in front of which a wreath was placed each Memorial Day in a solemn ceremony started by his old friend, John McGraw.

That plaque was infamously stolen after the last Giants game at the Polo Grounds in 1957. For decades historians searched in vain for the plaque or any trace of who the scumbag was who stole it, but it wasn’t until 1999 that a couple moving into their new Hohokus, New Jersey home discovered a plaque wrapped in a blanket hidden in the attic. Turns out the home was formerly owned by a New York City cop named Gaetano Bucca. Officer Bucca, whose police beat in 1957 included the neighborhood surrounding the Polo Grounds, had apparently swiped the memorial. But then again, baseball historians aren’t positive the plaque is the real one stolen from the Polo Grounds. The San Francisco Giants for their part didn’t seem to care as they distance themselves from their former life in Manhattan, except when it is time to sell “throwback” merch. After a long campaign, dedicated World War I historians finally convinced the team to install a replacement plaque honoring Eddie Grant in the Giants new ballpark. You can see it near the Lefty O’Doul entrance, but in this day and age where it seems like everyone is called a “hero,” this modest memorial to a fallen soldier who gave his life for his country just doesn’t seem to be enough.

Dedicated to Captain Eddie Grant and every other serviceman and servicewoman who gave their life so I may live free in this great country of ours. Thank You. 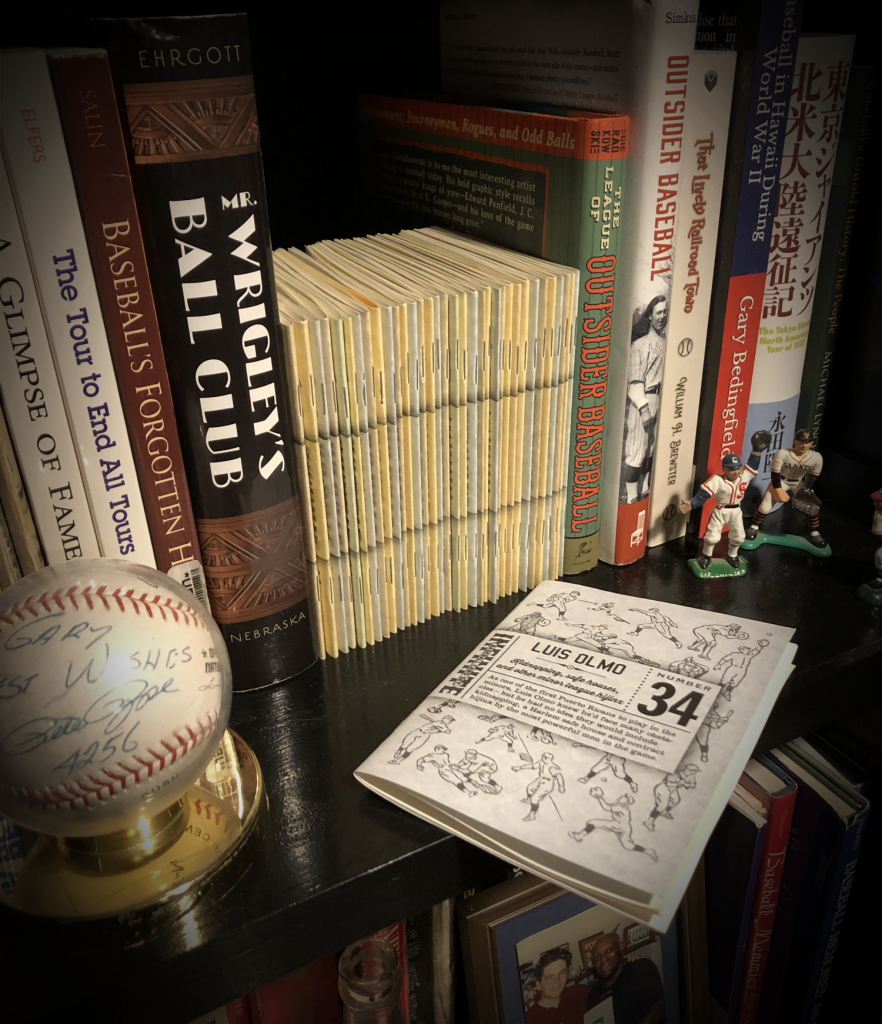 ILLUSTRATED, RESEARCHED & WRITTEN by award- winning artist and writer Gary Cieradkowski, each of the signed 4¼”x 5½” booklets feature an original 8 to 24 page story along with a colored art card attached to the inside back cover. These mini- books can be bought individually, thematically or collected as a never-ending set, for $10 each. Because these are handmade in my studio, the production number of each booklet remains low, available on first come, first served basis.

A SUBSCRIPTION to The Infinite Baseball Card Set Booklet Series includes a guaranteed regular 12 issues, plus one extra SUBSCRIBER SPECIAL ISSUE. Booklets 1-5 and Season 1 and 2 of the series can be purchased as a group in the store as well – until supplies run out.