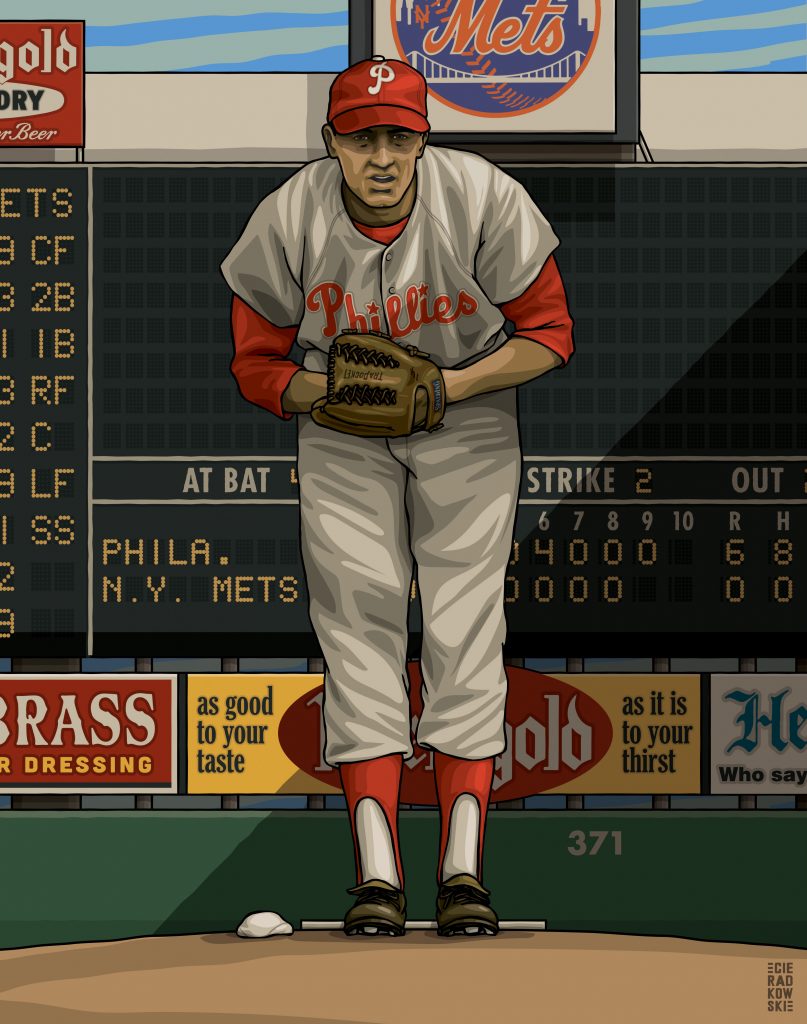 In the spring of 1964 veteran right hander Jim Bunning was easing into his first season in the National League. Bunning had been the Detroit Tigers’ ace since the late 1950’s and one of the only bright spots on a dismal ball club. Besides his fastball, Bunning had a tough slider and nice curve, all delivered in a 3/4 sidearm motion that often left him flying off the mound like an out of control starfish. It was unorthodox, but it worked.

In his first full season, 1957, he led the American League pitchers with 20 wins and subsequently posted seasons of 19, 17 and 17 victories. His trade to Philadelphia in 1964 was expected to be the final piece needed to push the Phillies to a pennant. In his first two starts he struck out a combined total of 20 Mets and Cubs, then on May 23rd he was 6 2/3 innings through a perfect game before a pop fly got the best of aging outfielder Wes Covington. By Father’s Day, the 32 year-old pitcher was 6-2 and looked like he was on his way to his finest season.

That Father’s Day weekend the Phillies were in New York playing the Mets for the first time at their new ballpark, Shea Stadium. The World’s Fair was also in full swing and Bunning had his wife Mary and his daughter Barbara join him for a mini Manhattan getaway. The other eight Bunning children stayed at their Cherry Hill, N.J. home that weekend. Friday, June 19th was a doubleheader, both ends won by Philadelphia, and the Mets managed to take the Saturday game. Sunday was Father’s Day and another doubleheader was scheduled. Jim Bunning was to pitch the first game.

That morning the Bunning family, devout Catholics, attended mass at St. Patrick’s Cathedral then feasted on a breakfast of sausage and eggs. The morning was already showing signs of the 90 plus degree weather forecast for that afternoon. While many players bemoaned playing in flannel uniforms in such high temperatures, Bunning loved pitching in the heat. According to legend, sometimes he’d sweat through three jerseys during the course of a game.

By noon, the Phillies ace was in Queens warming up for the 1:15 afternoon game. Though Bunning didn’t feel any different warming up, manager Gene Mauch said later that he could tell something was special about the way his starter was throwing.

The Phillies started off the first inning with a walk, sacrifice and run scored on a single. Bunning set down the Mets with a strike out, grounder and pop fly. Philadelphia scored again in the second, giving Bunning a 2 run cushion. Again, he set down the Mets one two three. In the fifth, Bunning got Joe Christopher to pop up to shortstop Cookie Rojas, bringing up Mets catcher Jesse Gonder. The big catcher hit a screaming liner between first and second that looked like a hit – but suddenly second baseman Tony Taylor came flying out of nowhere and knocked the ball down. Crawling on his knees, Taylor retrieved the ball and threw to first nailing Gonder.

Philadelphia broke the game wide open in the top of the sixth. First Johnny Callison hit a solo home run, followed by a walk to Wes Covington. Mauch sent Bobby Wine in to pinch run and a single by Tony Taylor put runners on first and second. Gus Triandos hit a Tracy Stallard fastball into center field scoring Wine, and then Bunning hit a bases clearing double to make it 6 nothing.

Now, there is that old baseball superstition that teammates never talk about a no-hitter or perfect game in progress – to do so is supposed to be a jinx. Bunning apparently had no such qualms, telling his teammates “C’mon, dive, do something out there. Let’s get this perfect game!”

The Mets continued to be set down in order in the sixth, seventh and eighth innings. Now the Mets fans began cheering for Bunning. No National League pitcher had thrown a perfect game since 1880 – this was real history unfolding before their eyes.

Charley Smith led off the bottom of the ninth and promptly popped a ball foul. Bobby Wine raced in from shortstop to haul it in for out number one. Now, in today’s softer, gentler game, it’s considered bad form to put in a pinch hitter to try to break up a no-hitter or perfect game – not so in 1964. With the exception of his decade of piloting the Yankees in the 1950’s, Mets manager Casey Stengel had been humiliated most of his managerial career. As leader of more inept ball clubs than anyone else in modern memory, Stengel had also been on the short end of the first of Johnny Vander Meer’s back-to-back no-hitters in 1938. If he could help it, there was no way he was going to be a victim a second time to baseball history. Looking down his bench, he sent George Altman in to pinch hit for Amado Samuel.

As pinch hitter Altman strode to the plate, Bunning signaled for his catcher Gus Triandos to join him on the mound. Thinking he was there to discuss how to pitch to Altman, he was taken aback when Bunning asked him to tell him a joke. Triandos, thinking his pitcher was nuts, laughed nervously and jogged back to home plate.

For a second, it looked like Stengel had found the right man to derail Bunning’s masterpiece – Altman smashed a fly ball to right that finally hooked foul and dropped harmlessly into the stands. He then fouled the next pitch behind home plate for strike two. Bunning bore down and threw a third strike past the swinging Altman for the second out.

Now the crowd was wild. From their box seat Mary and Barbara Bunning stood breathless along with 32,000 others. All across the tri-state, people were glued to their TV and radios. In Cherry Hill, N.J., Bunning’s other 8 kids watched their father’s perfect game unfold on their television.

Again, Stengel tried to bust up Bunning’s masterpiece. He took his lineup card and crossed out his pitcher and sent John Stephenson in to pinch hit. Fortunately, Bunning had faced Stephenson in the first week of the season and knew he had a hard time with the curve. He wielded back and threw a breaking ball which Stephenson swung on an missed.  Strike one.

The second pitch was another curve. Stephenson watched it break over the corner of the plate for strike two.

Two curves. Surely the next pitch was going to be a fastball, right? Wrong. The 32 year-old veteran broke off another curve which Stephenson missed by a mile. Strike three. It was Bunning’s 90th pitch of the afternoon and his 10th strike out.

Today, it’s hard to imagine just how special Bunning’s perfect game was. It had been more than 80 years since the last National League perfecto had been tossed, and it came during a season that had Philadelphia chasing their first pennant in over a decade. As we all know, that pennant proved elusive as the Phil’s ended the season in a nosedive that remained legendary until the 2007 Mets season-ending crash.

Jim Bunning’s great day was the icing on a Hall of Fame career. After he retired from the game, the pitcher went into politics and represented Kentucky in the United States Congress, first as a Representative from 1987 to 1999 and then as a Senator for two terms.

While Kentucky may not be able to boast as many Hall of Famers as other states, we can say that the Bluegrass State has been home to two men who are not only Baseball Hall of Famers, but also served as United States Senators – Jim Bunning and Happy Chandler.

This piece was a special commission I did a couple years ago. For me it was a fun one to do, because besides getting an excuse to illustrate one of those great 1960s Phillies uniform and cap, there was the bonus of having the Shea Stadium scoreboard as a backdrop. I had a great time finding out what ads were present during the 1964 season as well as all the uniform numbers and lineups of the players involved in the last inning of the perfect game. The icing on the illustration was the glove Bunning wore while pitching the game. Using a variety of photos taken that day, I was able to figure out what model Spalding glove he used so I could get the webbing detail correct in my drawing. The final little detail was Bunning’s uniform number “14” the pitched had handwritten in marker at the base of the thumb. It’s little things like that which make my job fun.

Turns out the client who commissioned the piece had been a friend of Jim Bunning, and his widow still lived a few blocks from my studio in Fort Thomas, Kentucky. After the piece was finished we had a copy made and I was invited to Mrs. Bunning’s house where I met both her and one of her daughters. The two showed me around the den which was a Hall of Fame dedicated to the ballplayer. Among the unique pieces of memorabilia was the actual glove I had spent all that time researching to get the detail correct. It was funny to think that had I known I could have walked down the street and studied the actual artifact in person! As neat as the glove and other mementos from Jim Bunning’s career was to see, my favorite has to be the framed scorecard filled out by the official scorer of the famous Father’s Day Perfect Game. Beside seeing a real piece of history up close, I was able to point out that my own cousin, Ed Sudol, was one of the umpires that afternoon. 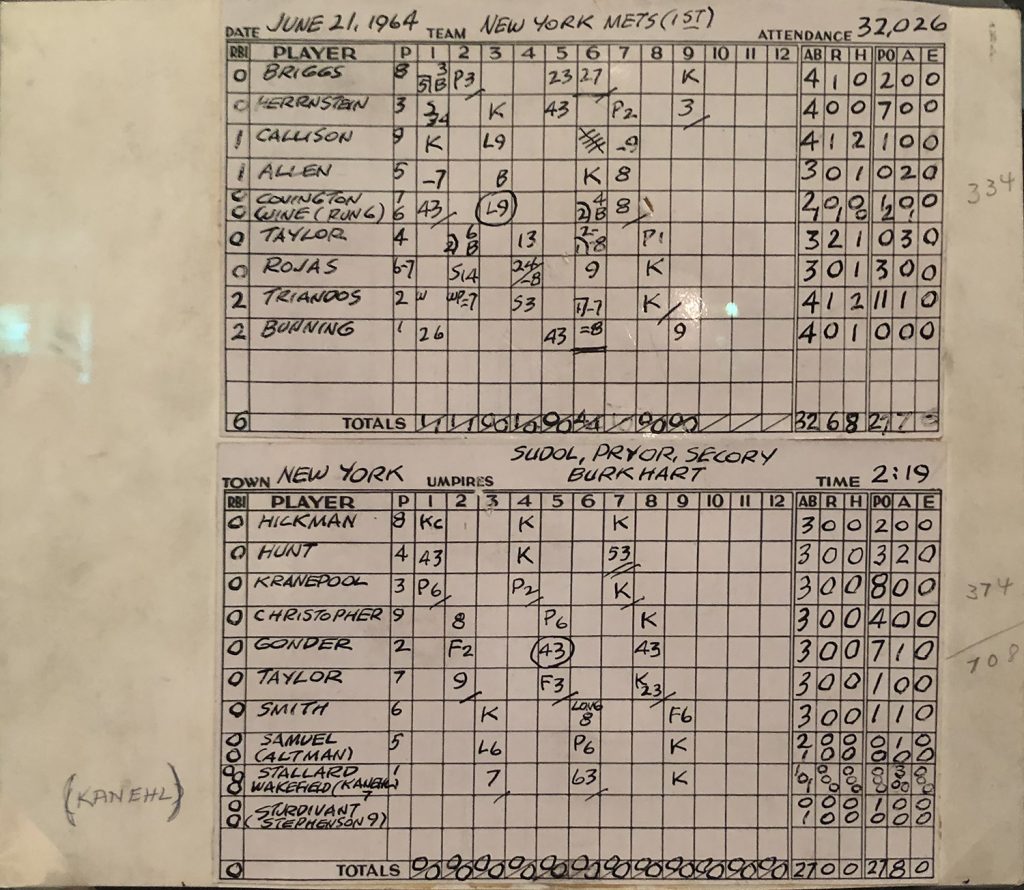