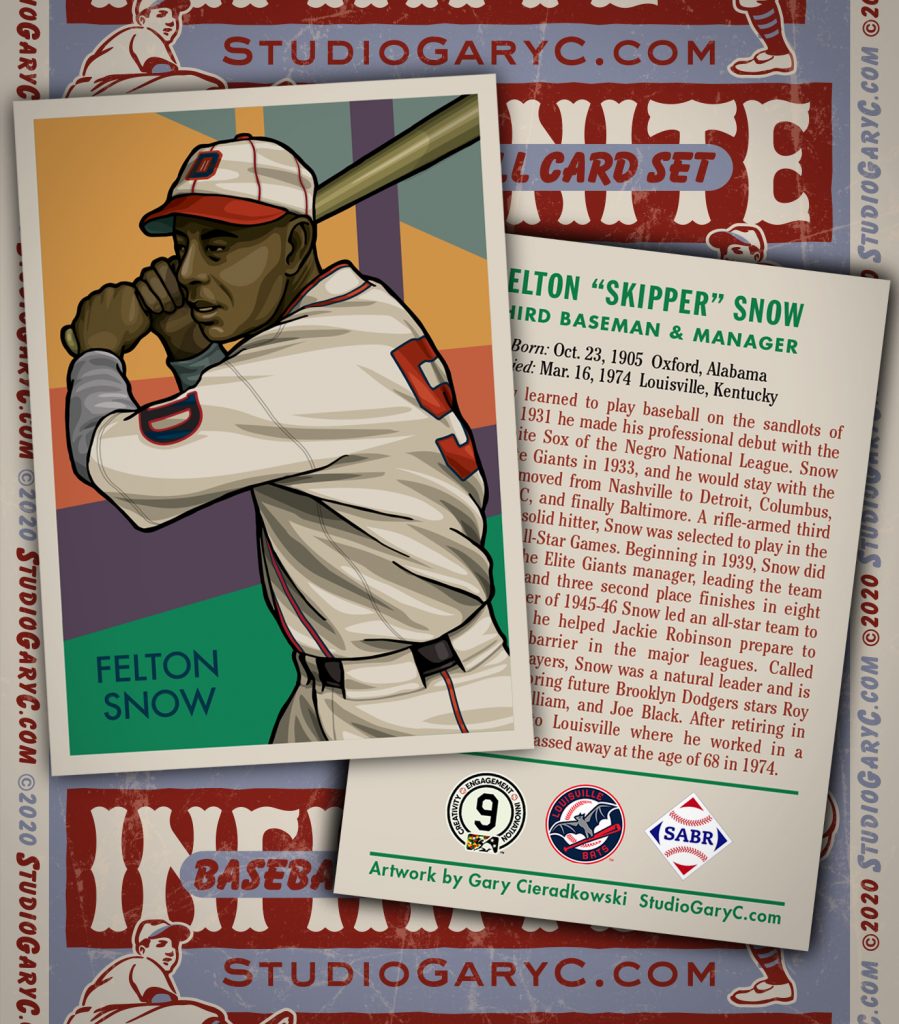 This Friday, September 2, the Louisville Bats (Reds AAA) will be honoring the Negro Leagues and Louisville’s own Felton Snow. Pictured above is the baseball card I illustrated, wrote, and designed which will be given away at the game. The Pee Wee Reese SABR chapter has also raised funds for a headstone for Felton Snow, and the dedication will be held the day before the game.

A little about the card: Unlike my usual cards, I designed this one to be the standard 2 1/2 x 3 1/2″ trading card size. I also wanted to give the appearance of being from the 1934-36 Diamond Stars set. I always loved the art deco look to that set and the simplicity of just the name on the front.

When Louisville’s chapter commissioner Tad Myre asked me if I could do something for the occasion, I jumped at the chance. I have been slowly working on a book about Kentucky baseball history, and Louisville native Felton Snow was on my list of players I wanted to highlight. The September 2 game honoring the Negro Leagues gave me the perfect excuse to do an illustration of Snow.

While sometimes it is hard to choose what team and uniform to depict a player wearing, Felton Snow made the choice much easier than usual because he played almost his entire career with the Elite Giants. However, while the Elites ballclub was a constant, the team moved all over the eastern half of the country trying to find a home base. Felton Snow joined the Elites in the city they started from, Nashville. The record books show he moved with the team to Columbus, Washington, D.C. and finally Baltimore. So it was a no-brainer to show Snow in an Elites uniform.

Because Snow played with the Elites from 1933 through 1947, there were a number of really cool uniforms to pick from. I decided to portray Snow during the 1936 season when he was part of the Negro National League all-star team that won the Denver Post Baseball Tournament. This was huge milestone in Snow’s career, and he was at the very heights of his talents. The year 1936 also allowed me to explore a mystery that has bothered me for thirty years: WHAT WAS THE “D” FOR ON THE ELITES CAP AND SLEEVE?

You can see in the above montage the “D” on the caps and sleeve. The photos date to 1935 and 1936, so these togs were used in both those seasons, and likely the same set both years. Record books show that in 1935 the Elites were based in Columbus and then moved to Washington, D.C. in 1937. For those who are missing the obvious, neither city begins with a “D.”

It took me a bit of digging, but once I isolated the first use of this uniform to the spring of 1935, I hit the newspaper archives. I quickly found an article in the March 1, 1935 California Eagle: 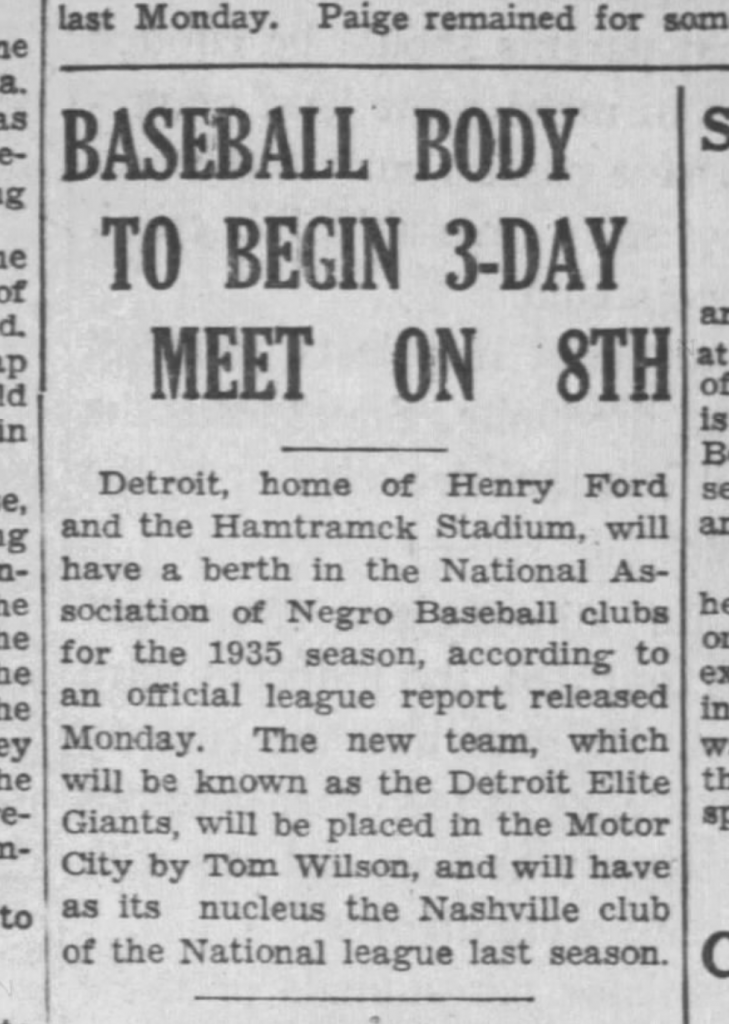 And there you have it – the answer to a baseball mystery that drove me nuts for years. What had happened was that the Elite Giants believed they were going to  call Detroit’s Hamtramck Stadium home for the indefinite future. A move to Detroit would have been a huge benefit to the Elite Giants. Motown’s large Black population was flush with disposable income courtesy of the booming auto plants and just begging for a Negro National League team to move there. So what happened?

It would seem that the owner of Hamtramck Stadium had some tax problems and lost control of the park. This meant the Elite Giants had to scramble to find new home grounds. The obvious choice would be Briggs Stadium where the Detroit Tigers played. Unfortunately this did not happen, likely due to the high cost to rent the stadium along with having to schedule games around the Tigers being out of town.

Unfortunately, the Elite Giants had ordered all new uniforms that proudly had a “D” on the cap and sleeve to represent their new home. Because the profit margin was razor thin in the Negro Leagues, the Elites were forced to keep their “D” uniforms after they relocated to Columbus, Ohio early in the season. And since these uniforms were all new, that meant to team recycled them for the 1936 season when they moved to Washington, D.C. as well, though it seems by mid-season most players had a solid colored cap with no letter on them. This was good, because the team would leave D.C. after 1937.

Well, that’s the story of the “D” caps and uniforms. With all that new info in hand, I just had to make the “D” uniform central to my Felton Snow illustration.

Besides the card that the Louisville Bats will be handing out on September 2, I also created a larger, more detailed illustration of Snow which will be in my Kentucky book. 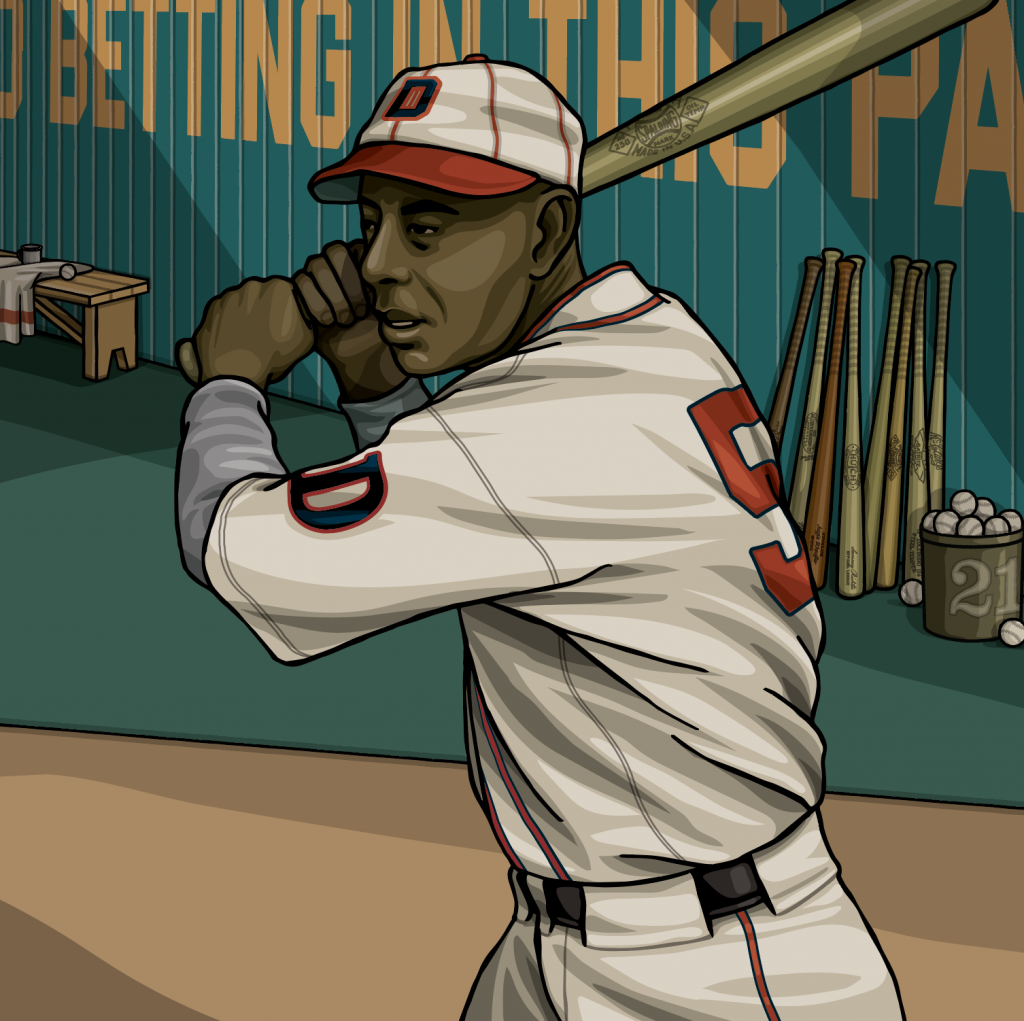 Hope you enjoyed my little journey into Negro League minutia.

The Bats were nice enough to set up a table by the team store when I can sign the cards and talk baseball with whoever stops by. Thank you to the Pee Wee Reese SABR Chapter and its commissioner Tad Myre for giving me the opportunity to help pay tribute to the great Felton Snow! Hope to see some of you on Friday night!

2 thoughts on “Felton Snow Card and a Uniform Mystery Solved!”