The idea for this piece goes to Tony Murawski. For years I would get out of the blue phone calls from him asking if I was going to do something on Andy the Clown. In all honesty, I was reluctant to do so, mascots not being my thing. But the more I looked into Andy’s story, the more intrigued I was.
This guy was a pure example of the ultimate fan. One little bit of info I didn’t include in my piece was the fact that Andy attended all three All-Star Games held in Comiskey Park: 1933 as a vendor; 1950 as a fan; and 1983 as Andy the Clown. And beyond being a fan, Andy was a gentle soul who only wanted to bring joy to others. In researching this story, I found myself uncharacteristically buying a piece of memorabilia related to Andy the Clown. It is a 1970s business card of his with a color photo on one side and this written on the other: “Andy the Clown says a smile wins friends, chases blues, lightens work, costs nothing, so keep smiling.”
My respect for Andy only grew when each veteran South Sider I interviewed shared their gleeful story of meeting Andy the Clown. I must thank one of those South Siders, author and historian Don Zminda, for sharing not only his memories of Andy, but also several personal snapshots of the old clown that I used for reference.
And finally, I have to credit the Chicago Sun-Times articles about Andy written by Richard Roeper. They were a great asset when trying get an idea of who the man was behind the grease paint.

I hope there’s still room in the modern game for another outsider mascot like Andy the Clown. Our world and the game we love has become so homogenized and carefully designed that there seems to be no room for originality. I hope I’m wrong. I hope somewhere out there is a fan crafting a homemade costume, practicing a proprietary cheer before a bedroom mirror, or loading some oddball instrument in the car on the way to a game to share some unsolicited mascotism with their favorite team.
There just has to be, right?

This week’s story is Number D1 in a series of collectible booklets. 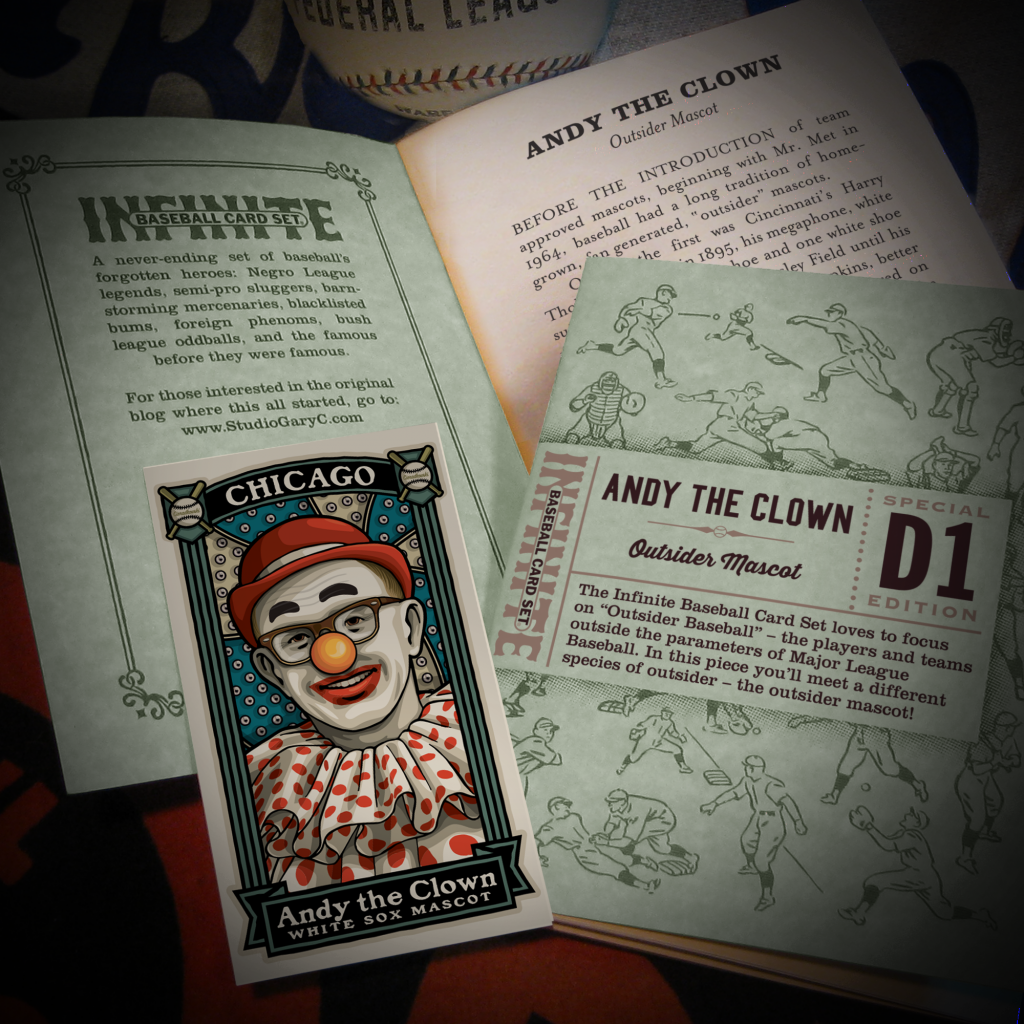 Each of the hand-numbered and signed 4 ¼” x 5 1/2″ booklets feature an 8 to 24 page story along with a colored art card attached to the inside back cover. These mini-books can be bought individually, thematically or collected as a never-ending set. In addition to the individual booklets, I envision there being themed sets, such as the series I did on Minor League Home Run Champions. You can order a Subscription to Season 4 as well. A year subscription includes a guaranteed regular 12 issues at a discounted price, plus at least one extra Subscriber Special Issue. Each subscription will begin with Booklet Number 042 and will be active through December of 2022. Booklets 1-41 can be purchased as a group, too.

3 thoughts on “Andy the Clown: An Outsider Mascot”